Down The Stretch They Come! 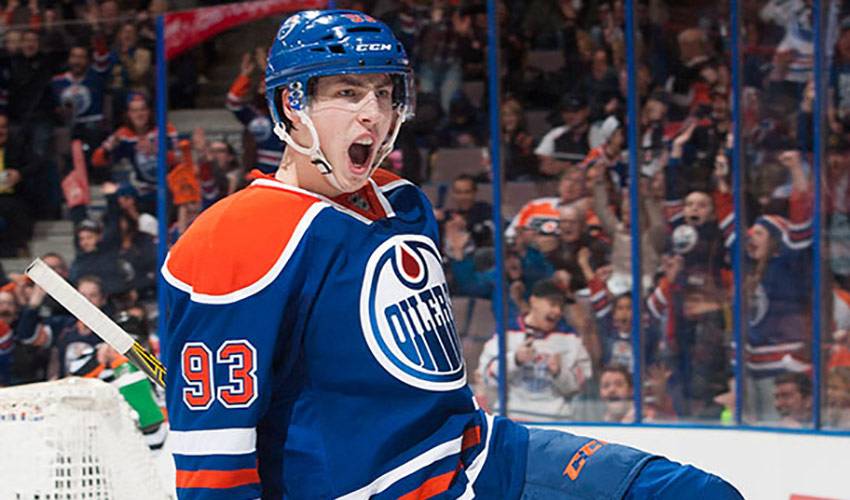 “That feeling, the rush of excitement when the action heats up and everyone is on their feet – it’s pretty amazing.”

Although it certainly sounds it, Ryan Nugent-Hopkins wasn’t talking hockey. In this instance, the young Oilers star was talking horses.

Nugent-Hopkins comes by his love for racing naturally. His grandfather was big into the sport, as a breeder in British Columbia, and the forward’s parents, Roger and Deb, also have a long association with thoroughbreds.

The family would often travel to Hastings Park in Vancouver to watch the races. It didn’t take long for Nugent-Hopkins to get hooked.

“The horses are beautiful, they’re just amazing animals,” said Nugent-Hopkins, who was born in Burnaby, B.C. “Every time we’d go, it was always a lot of fun. You’d grab something to eat and then go down and get as close to the action as you could. At Hastings, with the (North Shore) mountains in the background – it’s a great place to watch the races.”

In recent years, Nugent-Hopkins decided to throw his hat into the ownership ring. He has three horses, one of which, Zenya, delivered him a coveted milestone moment last year.

His first win as an owner, on June 13, 2015, didn’t come without drama. In fact, as Nugent-Hopkins recalls, there was plenty of it.

“When they came into the stretch, it was up for grabs,” he recalled. “It was still close as they got to the finish line. I’m a pretty quiet, laid-back guy, but I was really nervous. I was definitely on my feet.”

At the wire, Zenya, the favourite, finished second, a neck back of Silver Ovation.

A claim of foul by Zenya’s rider, alleging interference on the rider of Silver Ovation, was quickly posted on the infield toteboard.

This time, the call went in Nugent-Hopkins favour. It was a ‘good goal,’ so to speak.

One of the toughest aspects of being a horse owner, Nugent-Hopkins admitted, is something former NHL goaltender (and former Oiler) Curtis Joseph often noted when it came to the thoroughbreds he owned.

“It’s hard when you really can’t control anything,” laughed Nugent-Hopkins. “I never say too much to the trainer or the jockey before the race. I just wish them luck, really, and then go watch the race.”

He’s looking for more good fortune with the horse he bought at the 2015 Canadian Thoroughbred Horse Society (British Columbia Division) yearling and mixed sale, a filly he hopes brings R.N.H. Stable another trip to the winner’s circle.

“I really like the chance to go over the pedigree books, to study horses and to see if there’s any that catch your eye,” he said. “Of course, you’d love to find one that could win a big race, but regardless of what type of race it is, it’s exciting to watch your horse compete.”

Nugent-Hopkins also gets a thrill from watching the sport’s marquee events, including the Kentucky Derby, the first race in the U.S. Triple Crown series, slated for May 7.

Two years ago, he traveled with his parents to Kentucky to watch the race.

“It was unbelievable,” said Nugent-Hopkins. “The atmosphere – you can’t really put it into words. I know that a lot of celebrities and athletes will come out to watch. I didn’t get a chance to talk to them, but (NFL stars) Tom Brady and Wes Welker were there. My family and I had a great time.

“I’ve also been to Woodbine (Racetrack, in Toronto) once with my parents when I was young,” he continued. “I’d definitely like to get back there again soon, maybe catch a Queen’s Plate one day. It’s another great place to watch the races.”

Before NHL training camps get underway, Nugent-Hopkins will have the opportunity to get to Hastings a few times, and with a little racing luck, he’ll have some more win stories to share.

“Horses have always been a big part of my life,” said Nugent-Hopkins. “Being in the stands, watching them compete, it’s really cool to see them race.”

And it’s even better if they happen to cross the finish line first.