The Pittsburgh Penguins signed their two-time Stanley Cup-winning head coach to a contract extension that runs through the 2026-27 season. 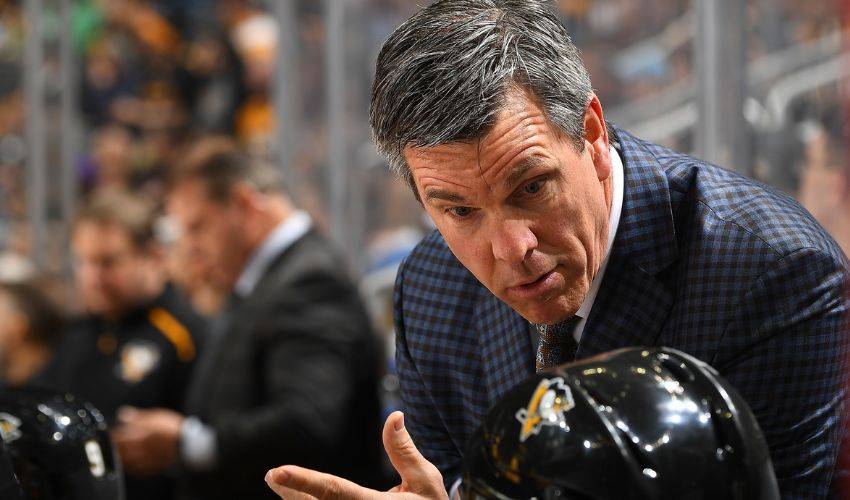 Apparently, neither do his bosses.

The Pittsburgh Penguins signed their two-time Stanley Cup-winning head coach to a contract extension on Tuesday that runs through the 2026-27 season, a pact that doubled as a vote of confidence in the club's iconic core of Sidney Crosby, Evgeni Malkin and Kris Letang and the fiery Sullivan's ability to lead them.

Sullivan still had two years remaining on his current contract. Yet Fenway Sports Group, which purchased the Penguins from Hall of Famer Mario Lemieux and Ron Burkle last fall, saw enough to lock down the winningest coach in franchise history for the long term.

The 54-year-old Sullivan joined Pittsburgh in December 2015. If he reaches the end of his new deal, it means he'll have spent more than a decade with the Penguins, a nearly unheard of tenure in the NHL.

Then again, Sullivan believes he's in a nearly unheard-of situation.

“I think I had the luxury of inheriting a standard of excellence, a certain culture that has been developed in Pittsburgh,” Sullivan said. "I feel the need to be the custodian of that.”

Sullivan's 297 regular-season wins are a franchise record. His 44-38 playoff mark includes Stanley Cup wins in 2016 and 2017. The Massachusetts native is the only American-born coach with multiple Cups and he's one of only two coaches in NHL history to win the Cup in each of his first two seasons with a team.

“He has clearly demonstrated what an effective leader he is,” said Fenway Sports Group owner John Henry. “And it’s evident how well players respond to his philosophy and work ethic night after night, month after month.”

Even if, on the surface, it looks like an odd marriage. Of styles anyway.

The grinder who spent a decade in the NHL willfully doing the dirty work others wouldn't or couldn't in order to cling to a roster spot leads a group of such preternatural ability it often leaves Sullivan shaking his impeccably coiffed head.

“I wish I could play the game the way that this group of players can play,” Sullivan said.

He couldn't. Yet the center who mustered all of 54 goals in 11 seasons has found a way to connect with the generational talents that dot Pittsburgh's roster. Asked to explain what's allowed him to thrive in a position that is long on burnout and short on sustained success and Sullivan points not to Xs and Os but something deeper.

“I just believe in being honest and candid with our players,” he said. “I think an important aspect of what we do is building relationships ... When relationships grow and develop over the course of time they should get stronger.”

Particularly during times of adversity, something that's become familiar in recent years in Pittsburgh. The Penguins haven't reached the second round of the playoffs since 2018 and saw a promising season come to an end under somewhat bizarre circumstances last spring in a seven-game loss to the New York Rangers in the opening round.

In the aftermath, the players to a man stressed the club's championship window remained open, even with Crosby, Letang and Malkin all in their mid-30s. Management apparently agreed, signing Letang and Malkin to lengthy extensions in July. Now, they've followed suit by doing the same to the coach whose “play the right way” ethos doesn't seem to have grown stale.

“It’s about selling the message,” Sullivan said. “It’s about making sure that whatever you're trying to sell, they’ve got to buy in. They have to believe to their very core that this is the game plan that is going to give us the best chance of success.”

And success remains the standard for a team that's reached the playoffs 16 straight years, the longest active streak in North American professional sports. Yet Sullivan is well aware the standard isn't simply reaching the postseason, but staying awhile.

While he's well aware of the advancing age of his superstars, he's bullish on the future.

“I believe these guys can still play,” he said of Crosby, Letang and Malkin. “They’ve shown no signs of decline. I have the opportunity to watch these guys every day. I know the sacrifices they make.”

The past seven-plus years have given Sullivan an opportunity to watch those sacrifices up close. There have been tense moments. Difficult conversations. Tough decisions. Success can be fickle. Longevity perhaps even more so. The new contract won't be worth much if the Penguins don't win and win at a high level.