Both David Pastrnak and the Bruins are showing they are really good at comebacks. 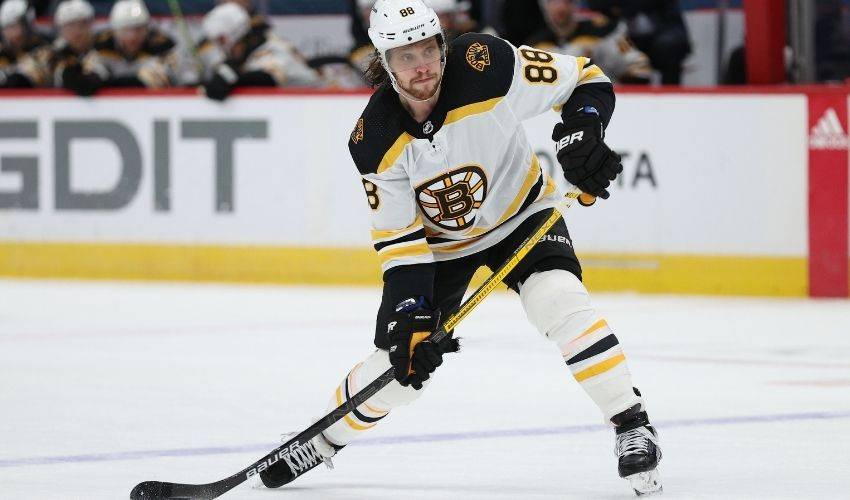 PHILADELPHIA — Both David Pastrnak and the Bruins are showing they are really good at comebacks.

Pastrnak had a hat trick and assisted on Patrice Bergeron’s goal 31 seconds into overtime, and Boston completed yet another comeback, this time beating the Philadelphia Flyers 4-3 on Wednesday night.

Pastrnak tied it with 14.9 seconds left in regulation on the power play, then set up Bergeron’s winner with a shot from above the left circle. Bergeron took two whacks at the rebound, and the second went in for the Bruins’ third power-play goal.

Boston overcame a 3-1, third-period deficit for the third straight game after topping the Washington Capitals 4-3 in overtime Saturday and 5-3 on Monday.

Pastrnak’s tying goal came after a scramble in front. He swatted at the puck as it floated out of the air to his stick.

The two-time All-Star now has five goals in three games since coming back from September hip surgery that sidelined him through training camp and the start of the regular season. Cassidy thought it might take Pastrnak some time to get back on track, but that hasn’t been the case.

“I told him my experience is you lose your timing a bit, your hands and timing are a little out of sync,” Cassidy said. “He showed me. Obviously, he’s on a mission. Good for him. We need it. He’s a scorer and you need those guys to win hockey games. He clearly looks energized and ready to play. We’re grateful and thankful for it.”

Pastrnak was eager to get back on the ice and is playing like he wants to make up for lost time.

“The recovery was really long,” he said. “It was a long wait, itching to get back out there.”

Bergeron also had two assists for the Bruins, who have won six of seven.

Joel Farabee, Jake Voracek and Kevin Hayes scored for the Flyers, who had their four-game winning streak snapped.

“You’re going to take penalties on them, your PK has to come up for you and ours didn’t,” Flyers coach Alain Vigneault said.

Boston has won all three meetings against the Flyers this season.

After Voracek’s goal early in the period put Philadelphia ahead 2-1, Farabee made it a two-goal lead when he finished a 2-on-1 with Scott Laughton with 11:19 remaining with a one-timer high over Tuukka Rask. It was the fourth goal in two games for Farabee, who notched his first career hat trick in Philadelphia’s 4-3 overtime win over the Islanders on Sunday.

James van Riemsdyk had a secondary assist on the goal, giving him nine assists on the season and five in the last two contests.

Boston pulled within 3-2 with a power-play tally 3 minutes later. After Philadelphia’s Nicolas Aube-Kubel was whistled for closing his hand on the puck, Boston made the Flyers pay. Bergeron perfectly set up Pastrnak with a feed from right in front of the net, and goalie Carter Hart had no chance on Pastrnak’s one-timer from left of the crease.

“Linemates helped me out,” Pastrnak said. “The chemistry is there.”

Pastrnak put the Bruins ahead 1-0 just 12 seconds into the contest. He skated right past Shayne Gostisbehere with a nifty move putting the puck through his own legs and then sent the puck toward the net. It went off the stick of Philadelphia’s Ivan Provorov and into the net.

Bruins: D Jake DeBrusk (lower body) and LW Matt Grzelcyk (lower body) are skating on their own in Boston, head coach Bruce Cassidy said on Wednesday. DeBrusk was hurt last Thursday against Pittsburgh while Grzelcyk was injured Jan. 26 against the Penguins.

Flyers: Sean Couturier missed his ninth game after suffering a rib injury Jan. 15 versus Pittsburgh. General manager Chuck Fletcher expects the Flyers forward back within a week to 10 days. The news isn’t as good for C Morgan Frost, who will have surgery on his dislocated shoulder that likely will sideline him for the remainder of the season. Frost was injured Jan. 19 against Buffalo.

Cassidy is trying to figure out Boston’s weekend schedule following the postponement of scheduled games on Saturday and Monday against Buffalo due to COVID-19 issues among the Sabres.

The Bruins had a planned day off on Sunday, and Cassidy wasn’t sure whether Boston would practice on Saturday or, possibly, have Saturday off and practice Sunday. He said they definitely would practice on Monday. Whatever is decided, Cassidy said having two practices instead of two games will allow the Bruins to rejuvenate.

“We can use it to our advantage,” he said. “You have to play the hand you’re dealt.”

The teams meet again on Friday night in Philadelphia.