Islanders prove they're for real in sweep of Penguins

The expectations were modest at first. The New York Islanders simply wanted to be better than the team that allowed the most goals in the NHL in 2017-18. Tougher to play against. Smarter on both ends of the ice. 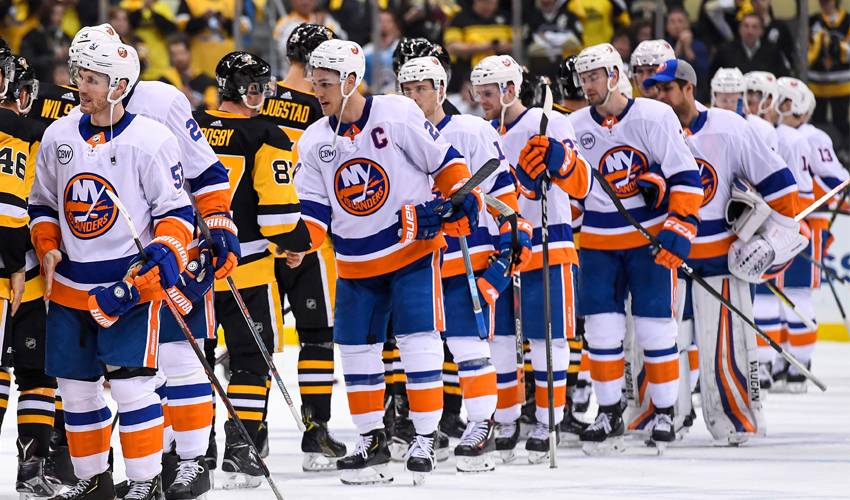 PITTSBURGH — The expectations were modest at first. The New York Islanders simply wanted to be better than the team that allowed the most goals in the NHL in 2017-18. Tougher to play against. Smarter on both ends of the ice.

Momentum built slowly. A midseason surge under new head coach Barry Trotz gave them confidence. The goaltending of Robin Lehner and Thomas Greiss, too. Still, even a surprising second-place finish in the Metropolitan Division and the franchise's best regular season in 35 years couldn't stop the Islanders from being underdogs heading into their first-round series against Sidney Crosby and the Pittsburgh Penguins.

So much for that.

Over the course of four games, the Islanders put on a defensive clinic that left one of the league's marquee teams searching for answers and left little doubt their turnaround under Trotz is very real. New York finished off a sweep with a poised 3-1 win in Game 4 that propelled it to the Eastern Conference semifinals for just the second time since 1993.

The Islanders held Pittsburgh to just six goals, trailed for less than five minutes the entire series and didn't buckle late in the clincher despite losing Johnny Boychuck and forward Cal Clutterbuck to injuries in the second period. When the final horn sounded, New York found itself shaking hands and moving on after needing a little over 12 periods to bring Pittsburgh's 13th straight playoff appearance to an abrupt and decisive halt.

"Obviously no one predicted this," Islanders forward Anders Lee said. "The guys in the room, we set out from day one to get better each day, to grow throughout the season and then when this time came here we were prepared as best as we could to be ready for this playoff hockey. I think we've proven that a little bit."

Or maybe more than a little bit. The Penguins — who know a thing or two about what it takes to thrive this time of year — didn't exactly make excuses after getting swept in the first round for just the second time in franchise history. The Islanders were faster, more determined and more disciplined from the opening puck drop of Game 1 right on through.

"We didn't execute well and made a few more mistakes than they did," said Crosby, whose assist on Jake Guentzel's goal served as the captain's lone point of the series.

It's the Islanders' way, one that carried them into a second-round matchup against either Washington or Carolina. Trotz is well aware of a chance he could find himself facing the team he led to the Stanley Cup a year ago. Yeah, it might be a little weird. There are worse problems to have.

"That's a special group that will always be a part of me," Trotz said. "But if we end up playing them, they're the opposition."

Whoever faces the Islanders will have to find a way to successfully navigate a defensive system that forces opponents to go through wave after wave of players in search of open space. The Penguins rarely found any while scoring just six times in four games and when they did, Lehner was almost always in perfect position. He stopped 135 of the 141 shots he faced and is getting a little tired of the notion what the Islanders are doing is a surprise.

"We have a good team," Lehner said. "We've been overlooked a little bit, but we have a lot of high-end skill on this team and we showed that this series."

Just as importantly, they showed it at the right time. Jordan Eberle scored in each game, including a shot that zipped past Matt Murray in the first period that evened the score just 94 seconds after Guentzel had given the Penguins an early lead.

"They get momentum, you hear the crowd cheering, they score first and you're able to get the next one and kind of quiet them down, that's big," Eberle said.

And the kind of thing the Islanders hope will carry over. They'll have at least a week off before continuing a season that will extend into early May. Heady territory for a group that had just one playoff series victory since 1993 before taking out the Penguins.

There's more work to be done. New York understands it doesn't play a particularly sexy brand of hockey. It also doesn't care. It works in the playoffs. That's more than enough.

"Early on I think a lot of people wrote us off," Eberle said. "They were a bit shocked. But we're confident in the way that we play. The way that the group is here, this is one of the tighter knit teams that I've played on. We love battling and playing for each other. You do that every night on a consistent basis and you can go places."