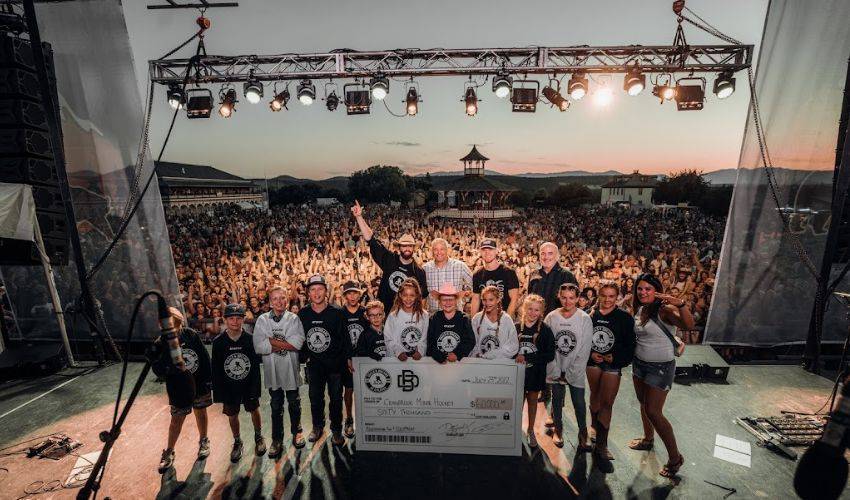 July 25, 2022 (FORT STEELE, B.C. / TORONTO) — Multi-platinum, iconic Canadian artist Dean Brody returned to his hometown area of the East Kootenay’s this past weekend for a sold-out show in Fort Steele Heritage Town and surprised fans when he was joined on stage by Cranbrook-native and 2022 Stanley Cup Champion Bowen Byram as well as the National Hockey League Players’ Association Goals & Dreams fund to make a $60k donation to the local minor hockey community. With the goal of making it possible for more kids to participate in organized hockey in the area, the donation from NHLPA Goals & Dreams and Brody’s partnership will provide complete sets of new hockey equipment and help cover registration fees to support the local community and deserving children – giving back to the place that Brody spent so many years of his life.

“Being able to return to my hometown and give something back to the place that made me who I am has been something I’ve always dreamed of,” said Brody of this past weekend’s events. “Anyone who knows me knows that the reason I do what I do is so that I could have a platform and a voice to help others. To me, there is nothing more Canadian than getting out on that ice to play a game of hockey and it has always been such a huge part of my life. Growing up in the East Kootenay area we would play every day. I’m so thankful for the NHLPA for coming together with me to make this weekend happen so we could support the local minor hockey league and kids from my hometown.”

“The NHLPA Goals & Dreams fund is very proud to partner with country music star Dean Brody on this initiative in his hometown of Fort Steele, B.C.,” said Devin Smith, NHLPA Goals & Dreams Chairman. “Dean's impressive commitment to his hometown mirrors the passion that many NHLPA members have for their own hometowns around the world. We are thrilled to have Cranbrook's own Bowen Byram representing all NHLPA members and their grassroots hockey program, Goals & Dreams, to help young boys and girls in the Fort Steele area participate in the great sport of hockey.”

Located just outside Brody’s hometown, Cranbrook is known throughout the country as a world-class hockey community and also the hometown of Canada’s fastest-rising star defenceman, Bowen Byram. Brody and Byram kicked off the weekend by hosting the Cranbrook Minor Hockey Association for a private meet & greet at the local arena ahead of Saturday’s concert. Byram surprised the 30 kids and their parents by showing up in his hometown for the event, joining them for a pick-up ball hockey game. He then went on to surprise the sold-out show of concert-goers again on Saturday by joining Brody on stage alongside Matt Langen of the NHLPA to make the cheque presentation to the Cranbrook Minor Hockey League. Ten lucky kids from the Cranbrook Minor Hockey Association also got to join Brody and Byram on stage for the donation.

Wanting to ensure the local music community was honoured and well represented, Brody hosted a contest for the opening slot of his Saturday night concert. With countless talented entries, the spot was ultimately awarded to Emma Kade, a pop singer/songwriter from the small town of Creston in the Kootenays of B.C. Also taking the stage ahead of Brody’s performance was Trevor Panczak, an award-winning country music entertainer from southern Alberta.

This past weekend’s events come as no surprise to anyone who knows Brody, because he is no stranger to giving back. His philanthropic initiatives stretch back over a decade to when he founded The Dean Brody Foundation, which continues to support initiatives around the globe through his own personal and private donations.