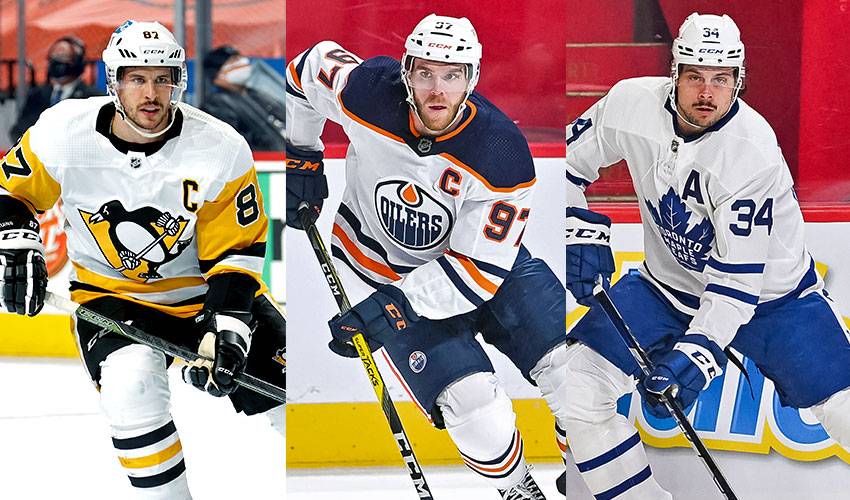 TORONTO (June 2, 2021) – The National Hockey League Players’ Association (NHLPA) announced today the three finalists for the 2020-21 Ted Lindsay Award (TLA) are forwards Sidney Crosby of the Pittsburgh Penguins, Auston Matthews of the Toronto Maple Leafs and Connor McDavid of the Edmonton Oilers. The TLA is presented annually “to the most outstanding player in the NHL,” as voted by fellow members of the NHLPA.

Crosby is seeking his fourth TLA, while McDavid is vying for his third such honour and Matthews is a first-time finalist. All three players led their respective teams to the playoffs, with Crosby leading his team in points for the 11th time in his career, McDavid winning his third Art Ross Trophy and Matthews winning his first Maurice “Rocket” Richard Trophy.

The 2020-21 TLA recipient will be announced during the Stanley Cup Final (exact date TBD). Formerly known as the Lester B. Pearson Award, the TLA is the namesake of the first president of the original Players’ Association and NHLPA pioneer, Ted Lindsay. This season marks the 50th season of the award.

The three TLA finalists received the most votes from their fellow players based on their 2020-21 regular-season campaigns, and are listed in alphabetical order as follows:

SIDNEY CROSBY, Pittsburgh Penguins
Crosby played in 55 of Pittsburgh’s 56 regular-season games, while he led the Penguins in points (62), goals (24) and tied for the most assists (38) to guide the team to a first-place finish in the East Division and their 15th consecutive playoff appearance. The 33-year-old forward placed 10th in the league in points, tied for 10th in power-play points (22), and he tied for 11th in both points per game (1.13) and even-strength goals (18). He also finished third in the NHL in faceoffs won (676) this season. A three-time TLA recipient (2006-07, 2012-13, 2013-14), Crosby is looking to join Mario Lemieux and Wayne Gretzky as the only players to receive the award four or more times. This is the sixth time in a span of 15 seasons that Crosby has been voted one of the top-three most outstanding players as a finalist for the TLA (also 2009-10, 2016-17).

AUSTON MATTHEWS, Toronto Maple Leafs
Matthews played in 52 of Toronto’s 56 regular-season games to help the Maple Leafs secure first place in the North Division. The 23-year-old forward won his first “Rocket” Richard Trophy by leading the league in goals (41) – scoring eight more than any other player – to become the first Maple Leafs player in 75 years (Gaye Stewart, 1945-46) and the second American (Keith Tkachuk, 1996-97) to win the goal-scoring race. He led the league in even-strength goals (31), placed second in even-strength points (53), while he tied for fifth in the league in points (66) and power-play goals (10). Matthews topped the league in game-winning goals (12) and shots (222), and his career-high average time on ice (21:33) ranked fifth among NHL forwards. A first-time finalist for the TLA, Matthews is looking to become the first Maple Leafs player and second American (Patrick Kane, 2015-16) to receive the award.

CONNOR MCDAVID, Edmonton Oilers
McDavid played in all 56 of Edmonton’s regular-season games to help lead the Oilers to a second-place finish in the North Division. The 24-year-old forward led the league in points (105) to win his third Art Ross Trophy, finishing 21 points ahead of the next highest scorer. He also paced all players in assists (72), points per game (1.88), power-play points (37) and even-strength points (68). McDavid recorded 33 multi-point games, and finished second in goals (33), game-winning goals (11) and even-strength goals (24). He averaged the second-highest time on ice per game (22:09) of his career – fourth among NHL forwards. A two-time TLA recipient (2016-17, 2017-18), and now a four-time finalist (also 2018-19), McDavid is looking to become only the seventh player to receive the award three or more times (following Guy Lafleur, Wayne Gretzky, Mario Lemieux, Jaromir Jagr, Alex Ovechkin, Sidney Crosby).

About the Ted Lindsay Award:
The Ted Lindsay Award is the only award voted on by the players themselves, carrying on the tradition established with the Lester B. Pearson Award in 1970-71. NHLPA members annually vote on the player they deem to be the most outstanding in the NHL regular season. Reintroduced in 2009-10 as the namesake of the late Ted Lindsay – the Ted Lindsay Award honours his legacy as a Hall of Fame forward known for skill, tenacity, leadership and his role in establishing the original Players’ Association. For more information on the TLA, visit NHLPA.com. Join the conversation by using #TedLindsayAward. 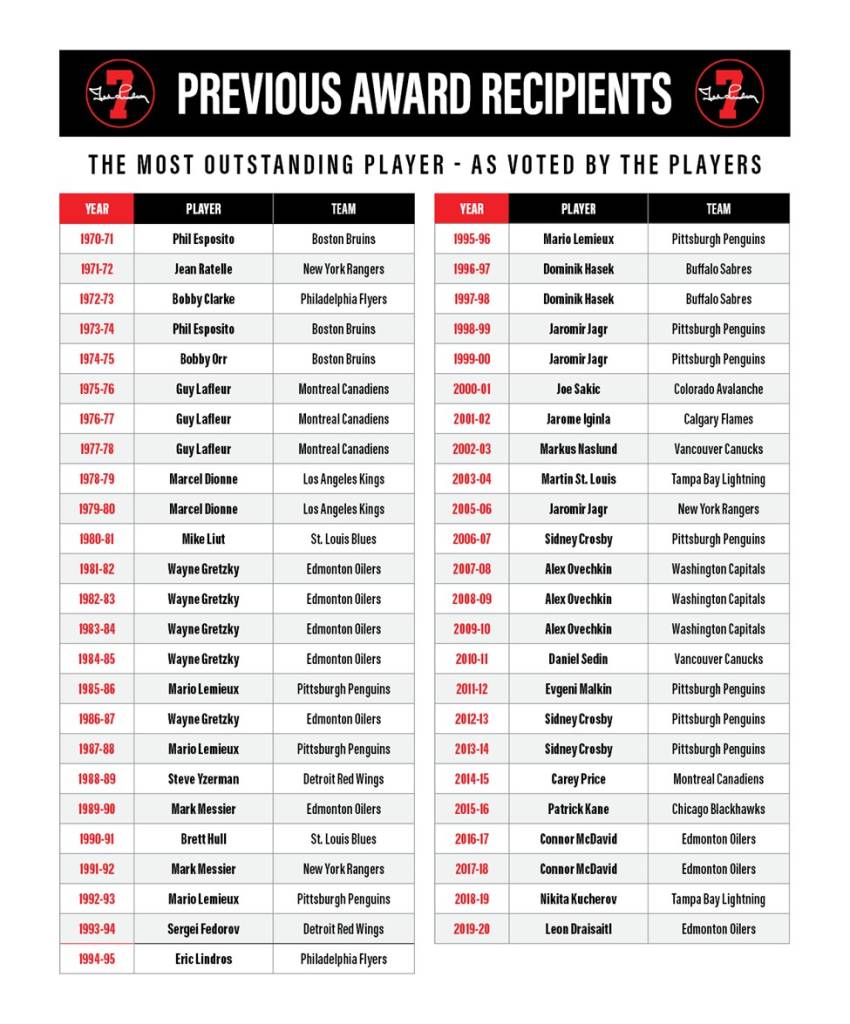