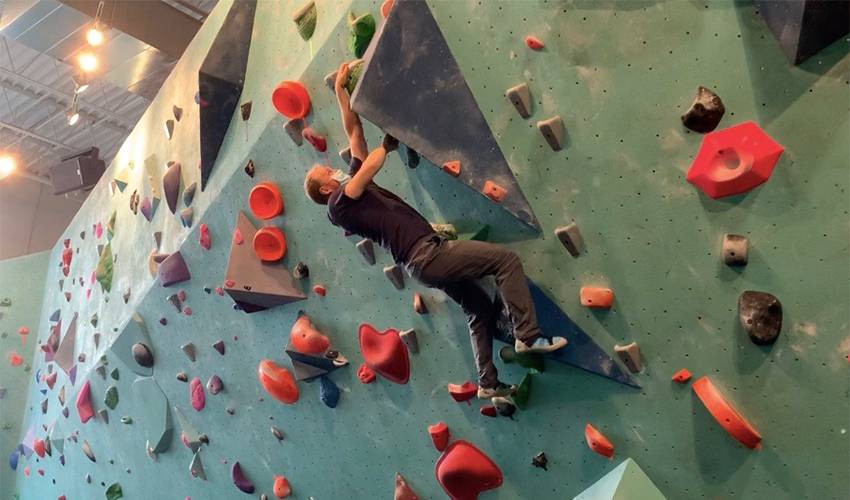 Nate Schmidt is right at home on the ice. When it comes to boulders, not so much.

His puck-moving skills are impeccable. He can log monster minutes. He contributes at both ends of the ice.

One thing the 29-year-old defenceman hasn’t mastered is the art of climbing big rocks.

It was something he discovered when he joined his girlfriend, Allie, and his sister Emily on a recent indoor adventure in his native Minnesota.

“It’s not rock climbing,” started Schmidt. “Bouldering is what they call it in the rock climbing community. Last week, my sister wanted to go and do it, so I went along. There are these different levels of rocks you have to climb up and I only made it up two or three levels.  I’ll tell you this… it’s a heck of a different workout than I’m used to. But it was fun. I got to enjoy that. I can also tell you I was sore for a few days. That was a lot of upper-body and grip strength we don’t usually work on.”

The undrafted blueliner, who signed with the Washington Capitals in 2013, was impressed by the agility of others he watched tackle the course.

“I had a pretty big lip I was able to grab onto, but some of these guys and gals that do it – just gripping a piece of rock with such accuracy and strength – that is seriously impressive. I watched a couple that went up to the second and third highest level like it was nothing, and there I was, about seven or eight levels below them.”

How did his sister fare?

“She was great. She’s way better than I am.”

While his bouldering form wasn’t exactly pretty to behold, Schmidt’s natural abilities as an athlete helped him hold his own that day.

When Emily Schmidt, a cardiac anesthesiologist for Minneapolis Anesthesia Partners, needed a new climbing crew to hang out with, she immediately thought of her brother.

“There’s not a lot of fields where I can do that [show Nate up] any more,” she said with a laugh. “It’s been awesome to spend time with him and Allie. I was in Boston for the last year, and when I left, I thought, ‘I need some new climbing partners.’ I had left all of the ones I had back in Boston. I asked Nate and Allie to go. At first, he was like, ‘Um… okay.’ But as we all know, Nate is always up for anything. It’s funny because even when he was younger, any sport, anything you ask him to do – he’s just always been a freak of nature. He says he’s not good at it because he doesn’t have climbing technique. How could he? He’s only been once before. But it was nice to see him not come out of the gates and be the best one at it.”

Emily did, however, give her brother a thumbs-up for effort and a passing grade for execution.

“You can’t always see your next step when you’re on the wall, so I’d holler up to him to bump his hand or foot to the next hold and he’d say, ‘okay,’ and then reach out and unintentionally grab one way higher or more difficult, and pull himself up with one arm. Not something a normal person can do on their first climb, but he just went ahead and did it. Sure there’s a technique to it, but don’t let him fool you. He did just fine.”

And Schmidt is doing just fine these days.

Dealt from Vegas to Vancouver October 12, the Minnesota native has taken the past little while to wrap his head around the move. There have been, admittedly, mixed emotions in the aftermath of deal.

Keeping his mind occupied through things like indoor climbing has provided a huge mental boost for Schmidt.

“Working out helps out a bunch. You’re not sitting around all day, thinking about all of things that have happened. Just stepping back on the ice this week as well… being back out there and getting that feeling that you’re working towards next year and the excitement that it brings is really motivating.”

Although the effusive, energetic Schmidt doesn’t need to come up with topics of conversation to share with his new teammates, he can always bring up his off-season indoor adventures in Minnesota.

“I guess I know what I’m doing-ish, kind of, after one time. But at the same time, I’m no good. Well, maybe I’m alright, ” conceded the 6-foot, 194-pounder, who will reunite with former Washington teammates Braden Holtby and Jay Beagle on the Canucks.

“Braden Holtby’s one of my best friends I have in hockey, a guy that I’ve kept in touch with. I’m really excited to be back with those guys, they’re two unbelievable guys,” Schmidt told reporters.

Regardless of his bouldering skills or lack thereof, Schmidt has developed a reputation as a teammate who will move mountains to get the win.

“Like I said before, guys are going to have a stark contrast between me and Braden Holtby when they meet us for the first time. But I can’t wait. From having to play against Vancouver, I hope I never have to face these guys ever again. I’m excited.”

When fans are back in the stands for NHL games, expect a large contingent of Schmidt family members to make their way to Vancouver.

“The city is going to have the whole Schmidt clan coming up there now,” noted Emily. “It should be fun. I haven’t had a chance to do any outdoor climbing, and I hear how the hiking and outdoor life is amazing there. I will also say that where Nate goes, a slew of 20 or 30 people will be following. Our family – cousins, aunts and uncles – we all take a week’s vacation to go see Nate. There will be many trips to Vancouver once the COVID barrier is lifted. We can’t wait to see him play live.”

If the Canucks do happen to make a deep playoff run, Emily might take a small measure of credit for what her brother contributed to it.

“I would love to say that were the case. I’ll take a little bit of credit if his hands are stronger. I don’t know if I can take any more beyond that. I will say that we’re all proud of him. Not just for what he does on the ice and for his teammates, but for who he is off the ice too. He’s a very special young man.”

He loves to play DJ this time of year so Nate Schmidt took control of Tuesday Tunes to get you in the Christmas spirit!

The National Hockey League Players’ Association is releasing the following statement at the request of Nate Schmidt.