March 11, 2020
By:
Chris Lomon
After the Buzzer
Nic DowdWashington Capitals 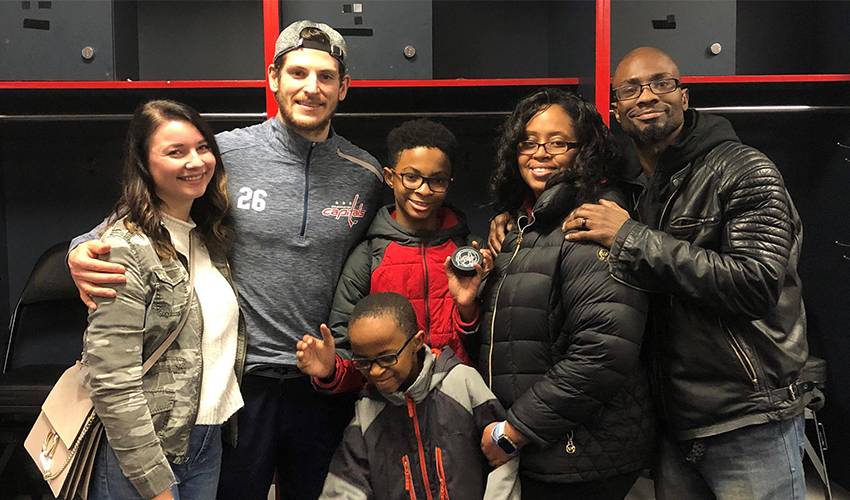 He very well may be the Washington Capitals most interesting man, a hard-working energy player who knows how to ask hard-hitting questions of his teammates. He even played the role of driver for teammate Garnet Hathaway, in a must-see video featuring the pair.

You always remember your first ride to the arena with your new team in a new city.

Throw it back to Garnet Hathaway heading to his first game at Capital One Arena with Nic Dowd.

Check out Beyond the Game: Off The Ice with Garnet Hathaway, presented by @CapitalOne #ALLCAPS pic.twitter.com/RFFFwtMXHw

The 29-year-old Dowd stopped by NHLPA.com to talk about life as a new dad, an upcoming event hosted by himself and his wife, Paige, and what hockey role he hopes his young son nets if he makes the NHL.

Dowd decided to shed his hockey role, albeit momentarily, when he joined reporters to interview teammate Brenden Dillon after a game.

His question? (Dowd’s microphone was a skate guard) “Obviously, coming from San Jose – a warmer city than D.C. is – did you bring your thermal underwear?”

Dillon: “Yeah, I wore shorts from my walk last night to dinner. I know I might have to put on some pants today, and I'll make sure to wear a suit and maybe an overcoat.”

“Just having a little fun with a new teammate,” said Dowd, with a laugh. “It went over pretty well, I think.”

Dowd became a father on New Year’s Eve, as he and Paige welcomed son Louie into the world.

It appears the 198th pick of the Los Angeles Kings (2009) is still wearing a big smile these days. On January 5, he scored his first goal since the new addition to the family, using a kiss for his celebration move.

Louie Dowd | 5 lbs 6 oz | NYE 8:18 p.m | Thanks for surprising us a month early little Lou because we are so lucky for the extra month with you 💙 pic.twitter.com/MD0ro0rTEq

“There are a lot of cool parts (to being a dad). I would probably say the best part is when you are holding them and they’re sleeping on your chest… it’s still so surreal that he’s yours. Just seeing him do new things – I know he’s still small – is great. He smiled for the first time recently, which makes you forget about all the nights he’s been keeping you awake. To see my wife become a mom has been pretty cool as well. It’s been pretty special. It’s my parents’ first grandkid, so that was exciting.”

It’s far too early to tell if young Louie is destined to follow in his father’s footsteps and be an NHL player. If that does happen to be in the cards, Dowd, who has skated in 251 big-league games, is hoping Louie sees plenty of ice time.

“Hopefully, he’s a goal-scorer,” laughed Dowd. “They don’t pay grinders as much, unless the game changes. But it’s not trending that way. We’re going to push for a goal-scorer, that’s for sure.”

GET IN WITH THE DOWD CROWD

In 2018, Nic and Paige created Dowd’s Crowd to provide the chance for kids with sensory issues to be able to attend and enjoy a Capitals home game.

Paige studied speech language pathology at St. Cloud State University in Minnesota, taking on the role of president of the National Student Speech Language and Hearing Association. After graduation and moving to California, she worked as an autism therapist.

MEDIA ADVISORY: Nic and Paige Dowd to Host Dowd’s Crowd skate for children with autism March 10 @MedStarIceplex. The Dowds created Dowd’s Crowd in 2018 to provide the opportunity for autistic children to attend and enjoy a Capitals game. RSVP info was emailed to media. pic.twitter.com/sS3wLrpW0K

“I think the biggest thing we’ve taken away so far is that it’s allowed the parents of the children and the children to enjoy a night out. The kids really seem to enjoy the game. We also give them the Dowd’s Crowd kit that has some sensory stuff (noise-cancelling headphones, sunglasses, a foam puck and a conversation card) in there, which makes the game a little bit easier for them. If the lights or the noise is over-stimulating, there are products in there that allow them to deal with that stress if that occurs. The skate itself, I think it’s going to provide families with an opportunity to take part in something they may not do themselves. We want to make it a welcoming environment for the kids and everyone that comes.”

“It’s great. To have Paige involved helps a lot, and we enjoy doing that kind of thing together.” – Dowd, on teaming up with his wife to help make a difference in the community.

.@Capitals center Nic Dowd & wife @paigemdowd are hosting a Dowd’s Crowd skate for children with autism on March 10 at @MedStarIceplex ⛸

Thank you for your amazing work! 🧩 pic.twitter.com/GpXzohoRg0