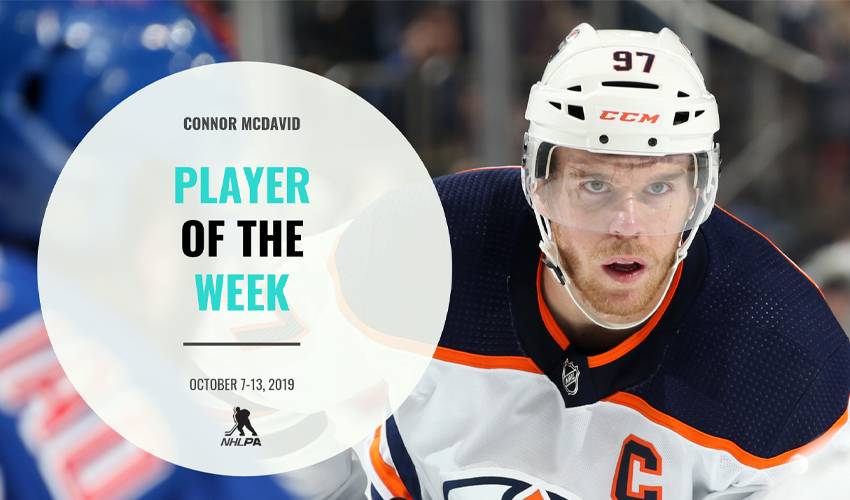 Connor McDavid overtook the NHL scoring lead with 12 points in three games (2-5–7) and played a big part in the Edmonton Oilers’ first 5-0-0 start to the season in 34 years. The Oilers also made history with the streak as the first NHL team to overcome a deficit to win each of their first five games in a season.

The @EdmontonOilers have overcome a deficit in each of their five wins of 2019-20. #NHLStats pic.twitter.com/mA48fFm7Vg

McDavid joins Wayne Gretzky as the only Oilers player to have 12 points in their first five games of the season and had an NHL-best five power-play points. He also continues to impress in the first month of the season, having put up 65 points (28 goals, 37 assists) in 47 career games in October.

In the first game of the Oilers’ road trip through the New York area Tuesday, McDavid had his second straight multi-point performance at Nassau Coliseum to lead the Oilers to a 5-2 victory over the New York Islanders in their third straight win.

He was named the second star of the game behind teammate James Neal, who was named the first star after scoring four goals against the Islanders. McDavid picked up two of his assists off of goals by Neal, while also helping linemate Zack Kassian extend his goal streak to three games.

In a game that featured five former first overall NHL Draft picks, McDavid made sure the Oilers’ perfect start to the season remained intact, putting up his third straight multi-point performance as Edmonton came away with the shootout win over the New Jersey Devils Thursday night.

McDavid played a season-high 25:31 and was named the game’s second star behind Leon Draisaitl who had a goal and the shootout winner.

For the second straight game, McDavid had a goal on the power play to help the Oilers win their fifth straight game Saturday afternoon against the New York Rangers at Madison Square Garden.

Scoring the game-winning goal and an assist, McDavid notched a third straight game with two or more points as the game's first star to help him take the lead in NHL scoring with a league-high seven power-play points.

With the victory, for the first time in franchise history, Edmonton swept their three-game road trip against all three teams in the New York area. The Oilers also improved to 5-0-0 to start the season for the first time since 1985-86.

The Oilers captain now sits atop the NHL scoring lead with 12 points (4-8–12) in five games, and also has a league-high seven points on the powerplay.

After a stop in Chicago for a matchup against the Blackhawks Monday, the Oilers return home from their four-game road trip to host two games – the Philadelphia Flyers Oct. 16 and Detroit Red Wings Oct. 18. They’ll finish their week on the road against the Winnipeg Jets Oct. 20.