What made Lee a difference maker on and off the ice? Former coach Jeff Jackson offers up his thoughts in this week’s edition of My Top 5! 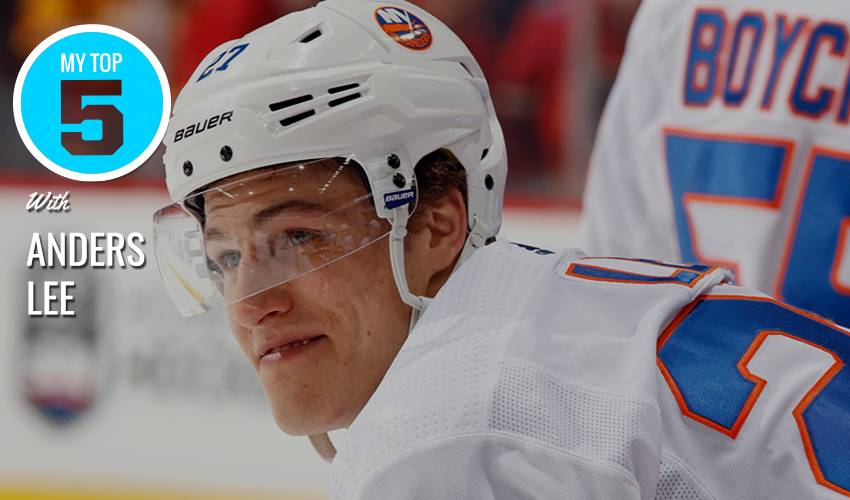 New York Islanders captain Anders Lee played three seasons at Notre Dame, appearing in 125 games for the Fighting Irish. As a freshman, the Minnesota native helped his team reach the NCAA Frozen Four. As a junior, he was named Second-Team All-America after recording 20 goals and 38 points.

For Jeff Jackson, named the Spencer Penrose Award winner as the National Coach of the Year in 2018, Lee’s impact on the Notre Dame hockey program continues to this day.

“I’m just proud to have coached him,” said Jackson. “I can’t take credit for what he’s become as a person or player because he deserves all that credit. At this point in time, I can call him a friend. He’s been a big part of our program during and after his career here. He stays in touch and texts me all the time. We have a great relationship.

“I have a picture on my wall… he’s the first player that’s ever brought the championship trophy over to me and handed it to me. He did that when we won the CCHA championship (2013). Coming from him, it made it that much more special.”

What made Lee a difference maker on and off the ice? Coach Jackson offers up his thoughts in this week’s edition of NHLPA.com’s Top 5.

“When we recruited him, he was a tremendous football player as well as a hockey player. That told me a lot about him, not just being a great athlete, but his commitment level to his development. With it comes that competitive edge. One of things that we look for in our players that we recruit is, ‘Do they have the character to become better players?’ That’s what I would consider a competitive spirit, the ones who push themselves to be better than those they play against. He had that mindset to make himself into a great player.”

“I had several conversations with Ryan Jankowski, who was the scout for the (New York) Islanders at that time. We would always talk about Anders’ skating, about his position of being a winger or a centre. I think Anders took that to heart. He played winger for us his first two years and he asked me if he could play centre in his junior year. He was going to be our captain and I wanted to give him that opportunity. He made himself into a better skater and that’s a hard thing to do at that age. But he kept on pushing himself. People were critical of his skating and I think it motivated him.”

“That (being a leader) was evident to me the moment I met him for the first time, as a recruit. You could tell he had his act together. He was a mature young guy before he got here. He had all his priorities in place. He was good in school, he was good as an athlete – he pushed himself in every aspect of his life. I wanted him to be our captain as a sophomore and he turned me down because he thought it was unfair to the older guys, the seniors on the team. How many kids would do that? He wasn’t afraid of being the captain, but he was respectful of his teammates.”

“He was never selfish or undisciplined in his play, which is part of being a team player. Executing the system, not taking penalties or long shifts – he was committed to doing things the right way. A big part of that would have been in the locker room, in being a good teammate, and also being a good teammate on the ice. He was regarded very highly by his teammates, not just as player, but also as a person.”

“He was an adult by the time he got here. You have to give his parents a lot of credit for the person he became, but a large part of it is on him. I think that’s part of the attraction of why he came to Notre Dame, the commitment to something bigger than just hockey. I’m so proud of what he’s accomplished with the Islanders, but I’m more proud of how he’s carried on the tradition of Notre Dame athletes’ service to the community. We emphasize that in a big way. When I see Twitter feeds and read articles about some of the things he’s doing for charities and for kids, it makes me really proud to have had him here.”

In memory of his dear friend, Fenov, earlier this week @leeberr09 announced he will be awarding scholarships to high school seniors in honour of Fenov's determination and commitment to his studies. For more on this beautiful gesture visit https://t.co/nmiJPLyEnK pic.twitter.com/HdUNips7HU