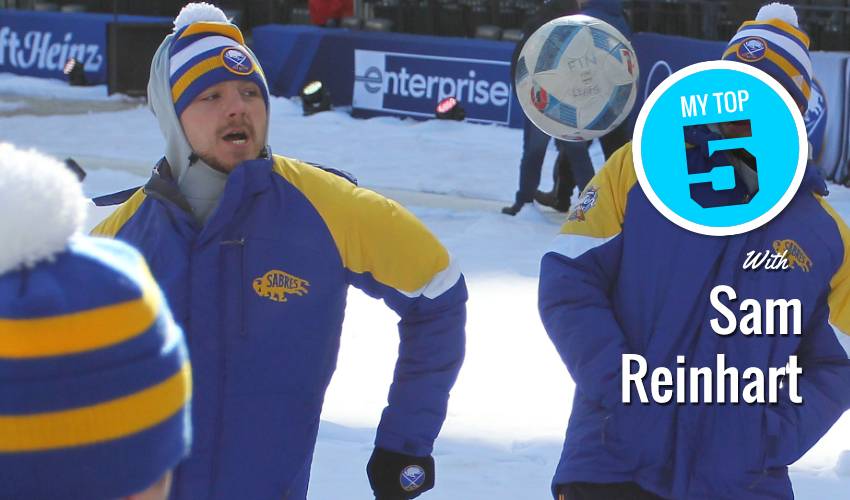 The 23-year-old centre, who scored the shootout winner against Minnesota on February 5, stopped by NHLPA.com to share the five soccer stars he’d like to play alongside, and to offer up the one match that’s on his soccer bucket list.

“Lionel Messi is definitely the top guy on my list. He’s the best ever and my favourite. I have a couple Messi jerseys. I wear them on the plane quite a bit. He’s the player I’d love to get out there and play or practice with.”

“Ronaldinho is probably the most skilled player ever. What he was able to do out there was amazing. He had so many things that he could with the ball. You could see why he won some pretty big awards.”

“I really like watching Eden Hazard play. He’s excellent. My mom is half-Belgian, so that makes me a quarter-Belgian. I got one of his jerseys for the World Cup last year.”

“I’d also choose Mario Balotelli because he’s hilarious. Just to see some of his antics would be a lot of fun. He’s a good player, too. But it would definitely be memorable playing with him.”

“He’s going to be the best. He’s just so good. He’s young, but he’s already earned a lot of impressive honours. He’s a player you like to watch because he can change the game in a second.”

“If I had to choose somebody on my team to play with, I’d go with either Rasmus Ristolainen or Rasmus Dahlin. They both like soccer.”

“I haven’t been to Europe to see a match yet. I saw Chelsea play Celtic in an exhibition game in Seattle a long time ago. It was cool. My older brother, Max, he played in Cologne for a season a couple of years ago. I also saw David Beckham play in Vancouver against the Whitecaps. He was pretty cool to watch.

“One day, I’d love to see Barcelona play Real Madrid, in Barcelona. That’s at the top of my list, for sure.”