When he’s not busy netting short-handed goals, Mark Jankowski can be found tuning in to watch some of his all time favourite big screen flicks. 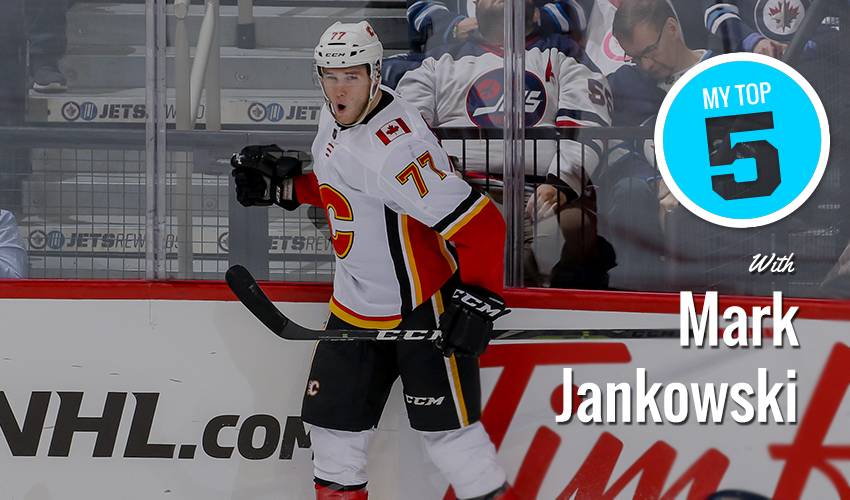 When he’s not busy netting short-handed goals – he’s tied for the league lead with four – Calgary Flames forward Mark Jankowski can be found tuning in to watch some of his all time favourite big screen flicks.

The 24-year-old centre recently stopped by NHLPA.com to deliver his thumbs-up for five Hollywood hits, including one movie he can likely rhyme off, word-for-word.

And as an added bonus, Jankowski picked out which teammate he’d choose to co-host if he were asked to host this year’s Academy Awards.

“I’d have to start off with The Other Guys, with Mark Wahlberg and Will Ferrell. Why? It’s a movie that I’ve seen a million times and can quote it probably from start to finish. It’s just one of those movies where I’ll never get sick of it. I can watch it yesterday and if it was on TV today, I’d watch it again. I never get tired of it.”

“Another one that stands out for me is The Internship, with Owen Wilson and Vince Vaughan. I just think when those two actors work together and play off one another, it’s hilarious. That’s always been a really fun one to watch.”

“The Shawshank Redemption is a great movie. I love it. It’s an all-time classic. I really love the story and the acting is phenomenal. I usually like comedies, but this movie is one I’ve watched more than a few times.”

“Good Will Hunting is another one of those movies that really draws you in. I’ve always been a fan of feel-good movies and it’s certainly one of those, especially the ending. I like the transformation of Matt Damon’s character.”

“I’ll go with Django Unchained. I like that movie a lot. It’s a great cast and a great director (Quentin Tarantino). It’s a little long, but it’s a great movie. The theme song of that movie is my goal song at the Saddledome. They made a connection between Django and Janko, so I when I score, I hear that song and it reminds me of the movie.”

"My co-host for the Oscars would be… “I guess I’d go with David Rittich. Just the way his English is, I think anything he’d say would be funny. Hopefully, he would make me sound funnier too. He’s a great guy and he’s the one I’d choose.”