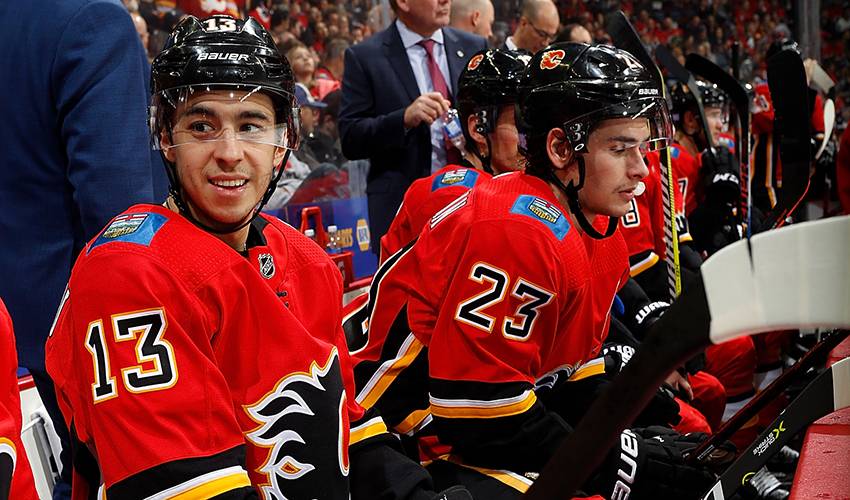 “He looked like he was 12 or 13,” recalled York of the left wing. “I think the initial view of Johnny was, ‘Is he going to be a factor for us?’ Boy, it took one game to get that answer and dispel any fears. We knew we had something special here.”

Playing against North Dakota, the soft-spoken Gaudreau let his game do the talking, putting on a show that had everyone, York, included, grinning from ear-to-ear.

“They just couldn’t get the puck from him,” remembered York. “Behind, the net, stopping, turning, twirling…I remember being on the bench, shaking my head and saying, ‘Whoa!’ We had seen it all in practice, but to put him on the big stage like that against North Dakota, it was fun to watch. We really enjoyed him for the three seasons he was here.”

It’s understandable why the Eagles coaching staff would feel that way.

Over his three campaigns at BC, Gaudreau scored 78 goals and tallied 175 points in 119 games. He also netted some serious accolades and hardware, punctuated by being selected as the 2014 Hobey Baker Award recipient as the top player in NCAA hockey.

Taken 104th overall by the Calgary Flames in 2011, Gaudreau made his NHL debut on the same day (April 11, 2014) he received the Hobey Baker trophy. Following the ceremony, he signed an entry-level deal with the Flames and suited up for the Western Conference club that night. He scored Calgary’s only goal of the game on the first shot of his professional career.

“Johnny, when he was here, always had an attitude of, ‘I’m not better than anyone else,” recalled York. “I shouldn’t have any privileges.’ He just blends in with the crowd. But not when the game starts. He doesn’t blend in then.”

And he hasn’t over his NHL career.

The five-foot-nine, 165-pounder has reeled off two seasons of 20-plus goals, one 30-goal campaign, and is currently on pace to post a slew of personal-best numbers.

York’s highest praise for Gaudreau? Nothing has changed from his decorated collegiate hockey days.

“His game is the exact same as it was here,” he said. “He’s a dominant player, makes terrific plays and makes everyone around him better. He’s in the world’s best league and he’s doing the same thing as he did here. It’s pretty incredible when you think about it. His impact on the college game was extraordinary and it’s the same thing in the NHL.”

So, too, is Gaudreau’s commitment to being a team player.

“I think he’s really involved in winning and losing,” offered York. “He wears his heart on his sleeve. Whether it’s the BC Eagles or the Calgary Flames, he’s all in for the team.”