Western University announced today the successful completion of the NHLPA Challenge in support of concussion research. 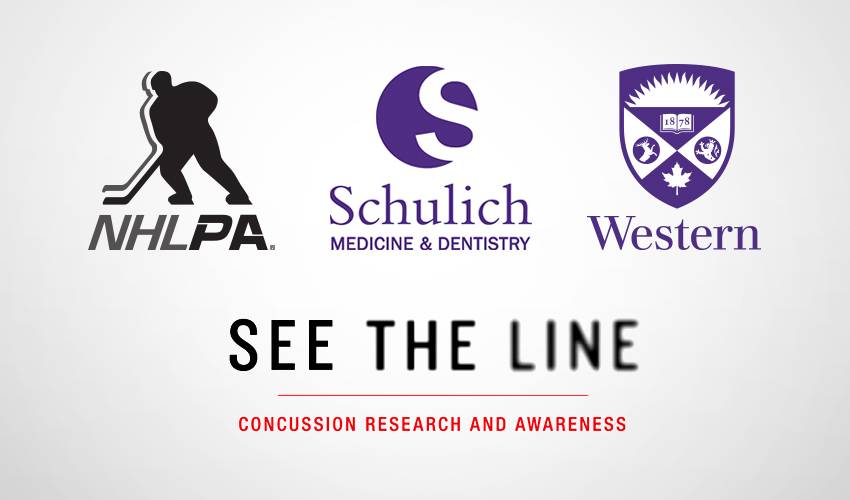 Western University announced today the successful completion of the National Hockey League Players’ Association (NHLPA) Challenge. The NHLPA began this process with a $500,000 gift as the foundation for a $3.125 million fund to provide support to researchers studying concussions at Western’s Schulich School of Medicine & Dentistry. Thanks to the generous support of donors in the community, that challenge is now complete.

“We are fortunate to have a strong team of collaborative researchers in London researching every aspect of concussion from diagnosis, to treatment and long-term effects,” said Dr. Michael J. Strong, Dean of Schulich Medicine & Dentistry at Western. “We are grateful to the NHLPA and a group of committed donors who saw the value in this important work.”

The funds will support a team of Western researchers at Schulich Medicine & Dentistry and Robarts Research Institute, who are investigating ways to better understand the symptoms and biomarkers of concussions and are working toward strategies to arrest the short- and long-term devastating consequences.

“The NHLPA is very encouraged that our challenge donation has been met and research will begin. We look forward to seeing positive results that the researchers at Western’s Schulich Medicine & Dentistry and Robarts Research Institute will make,” said Don Fehr, NHLPA Executive Director. “NHL Players support these efforts to further understand the health impacts of concussions, so that better and more effective treatments can be devised.”

Today’s announcement was made as part of See the Line, a 10-year initiative that seeks to educate athletes, coaches, parents and the broader community about the serious impact of concussions. It aims to shift the culture around concussion in sport, reduce the incidence of concussion and improve care through research.

Since 2013, thousands of medical and health professionals, athletes, coaches and community members have attended See the Line events, which this year expanded to two days to include a concussion-focused scientific workshop, a continuing medical education seminar, and the Community Symposium.

After suffering two concussions on the schoolyard when he was six years old, Sheldon Geerts, now 11, is happy to be back playing hockey, a sport he loves. He remembers the struggle he felt while trying to recover – headaches, trouble sleeping and anxiety – and the uncertainty he and his family felt around the appropriate time to return to play.

“It seems everyone knows the first steps to take after a concussion, but after that, the rules may be different, less understood, and misread,” said Geerts as part of today’s announcement.

He and his family hope that research at Western will continue to find better ways to diagnose and treat concussions for kids like Sheldon and athletes in the future.

ABOUT WESTERN
Western University delivers an academic experience second to none. Since 1878, The Western Experience has combined academic excellence with life-long opportunities for intellectual, social and cultural growth in order to better serve our communities. Our research excellence expands knowledge and drives discovery with real-world application. Western attracts individuals with a broad worldview, seeking to study, influence and lead in the international community.

ABOUT THE SCHULICH SCHOOL OF MEDICINE & DENTISTRY

The Schulich School of Medicine & Dentistry at Western University is one of Canada’s preeminent medical and dental schools. Established in 1881, it was one of the founding schools of Western University and is known for being the birthplace of family medicine in Canada. For more than 130 years, the School has demonstrated a commitment to academic excellence and a passion for scientific discovery.