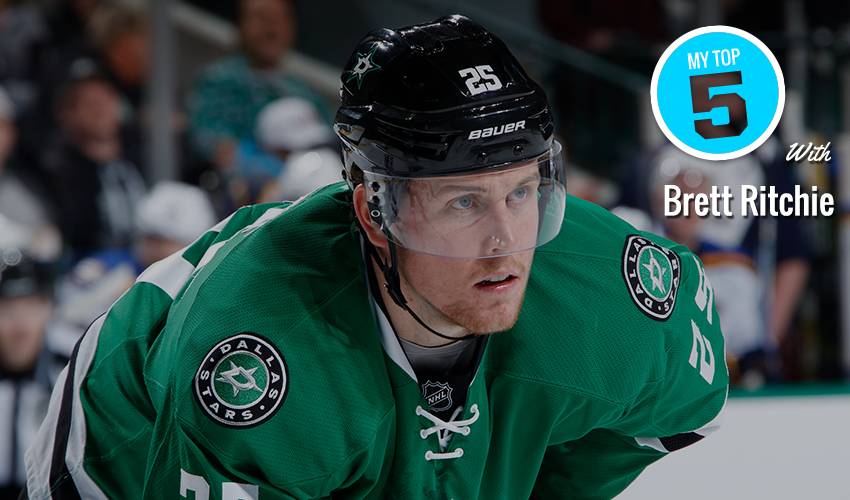 “Brett (Ritchie) is a big, physical presence who also possesses the ability to score,” said Jim Nill, Dallas Stars general manager, of the right wing who re-signed with the club for two years in July of 2017. "We feel that he has just scratched the surface in regards to his ability and that he will continue to elevate his game."

Ritchie, a 24-year-old native of Orangeville, Ontario, recently stopped by NHLPA.com for a road trip of sorts.

“I would say my favourite place would be – I’m biased – Anaheim. It’s where I get to play against my brother (Nick). It’s always like a playoff game. We played them a little while ago, but it’s always kind of weird. You’ll be on the bench and he’s on the ice. You’re used to cheering for him, but you’re not cheering for him on that night.”

“That’s my hometown arena. I have a lot of people that always come out to that game when we’re in town. My first ever game that I played in Toronto – there were so many people there. I couldn’t even tell you who – or how many people I know – that are there when we play in Toronto. It’s also the first place I ever watched an NHL game.”

“I love playing in Chicago. It’s a division rival and the atmosphere is great. The fans are really into it and are cheering during the national anthem. You’re always pretty amped-up for a game in Chicago, whether it’s a Tuesday night or Saturday night – it’s always buzzing.”

“This is tough. There are so many great places to play. But I’d go with Montreal. It’s really cool to play there. We only go there once. I’m sure I’d appreciate it more if we played there more, but just the history and the fans – it’s awesome.”

“We’ll close it out with Madison Square Garden. That place and L.A. are pretty close for me – both big places and so much going on. It’s just a really cool atmosphere playing at the Garden. It’s one of the most famous sports buildings in the world.”