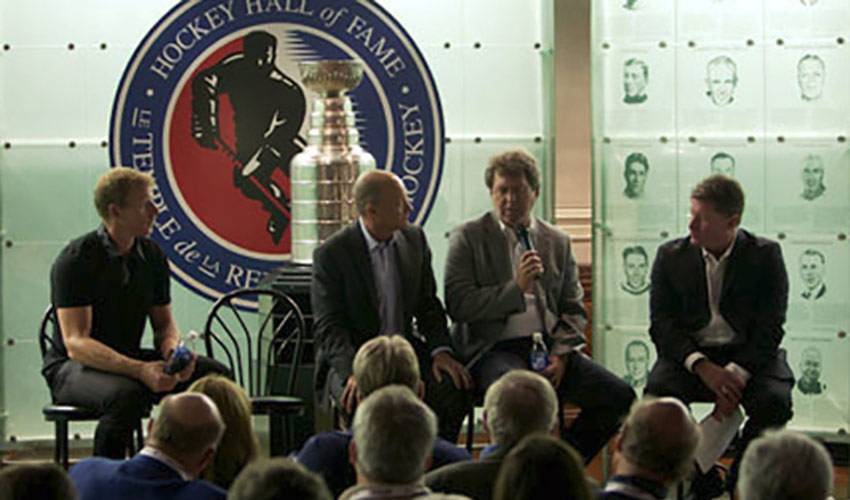 “Developing a Global Hockey Agenda” was the seminar topic for the afternoon session of the World Hockey Summit's third day, with Darren Dreger moderating a panel that included speakers from all major stakeholders of the game, drawing perspectives from the NHL, the NHLPA, the KHL and the IIHF. The session focused on how to best arrange certain events within the hockey calendar and what would the optimal way to mix best-on-best international competition with league play in North America and Europe.

Ralph Krueger, currently an associate coach with the NHL's Edmonton Oilers after spending over a decade coaching the Swiss national team, led the panel and began the discussion by offering up his take on what the global hockey agenda should be. Believing that “the only way this will work is if we have a clear plan,” Krueger went into detail describing different scenarios revolving mainly around the Olympics and supplementing non-Olympic years with World Championships, a World Cup, Champions League play between European league winners, and the ‘challenge cup' between European teams and NHL teams. A wrinkle added by Krueger to Olympic years saw the World Championships change to a U-23 tournament every four years.

The discussion was then opened to the members of the panel, who based their approvals and concerns off of Krueger's model, which led to over an hour of interesting debate between conflicting viewpoints.

Bill Daly, the NHL's deputy commissioner, was the first to discuss Krueger's model and said that “from the NHL's perspective, we're on board with many aspects of it. International competition for hockey and the NHL is very important. It's very special and part of our culture, part of our history and part of our tradition.” Daly continued by saying that the NHL has a very big role with any best-on-best tournament or ‘challenge cup' between leagues and that the league is looking forward to discussing those.

Agreeing partly with the four-year cycle concept given by Krueger, Daly suggested that it may be too much for players to play an Olympics and a World Cup every four years, as well as an annual World Championship, claiming that players “need some time to recharge the batteries, they need to have a summer” after going through long, grueling NHL seasons. Daly also agreed with the concept of U-23 World Championships, saying that it was a good idea to help shoulder the international competition burden on the league's star players. With “no tried and true mechanism in place” for ‘challenge cups' yet, Daly also thought it was a good idea to work on ways to gain more exposure for European NHLers in their home countries.

Alexander Medvedev, president of the KHL, said that the league “is ready to support all of the ideas that were presented,” claiming that the positive effect that international competition has on the development of hockey is unmistakable. Medvedev also said that he was surprised that NHL commissioner Gary Bettman is still saying there is time to decide on NHL participation for the 2014 Sochi Olympics, saying that by not sending NHLers to the Olympics it would be like putting “poisoned pesticides in the soil that is producing a first-class product and I hope that such a decision would not be made.” Medvedev also said that he hoped for a revitalization of the Victoria Cup, citing it as a success in the past.

The NHLPA's Mike Ouellet said that he was at the summit to deliver the views  of the players, and began by stating their interest in playing best-on-best hockey has always been there. “This is about showcasing the best players on the planet,” Ouellet said, “so we have to listen to them.” Citing a survey of players done in 2008 of over 600 NHLPA members, Ouellet said that 95% were in favor of participating in the Olympics past Vancouver, 91% of players said yes to continuing the World Cup of Hockey and 53% said yes to playing in the World Championships during an Olympic year or World Cup year.

Brian Burke, general manager of the NHL's Toronto Maple Leafs and the 2010 U.S Olympic team, continued his support of including the World Cup in a four-year event cycle going ahead, while also believing that “NHL players should continue to participate in the Olympic Games, but there's a big ‘if' at the end of that sentence.” The “if” Burke referred to is addressing the concerns that teams and management have about allowing their contracted players to leave their NHL teams mid-season, which they believe disturbs the flow of the season and putting them at risk of injury. Burke prefers the August-September World Cup model, which allows teams to come together in advance of the tournament and practice together, whereas he described members of the 2010 U.S Olympic team who arrived in Vancouver only two days before their first games.

Anders Hedberg, a pro scout for the New York Rangers and one of the first Swedish-born NHLers, continued on a common theme addressed by those who went before him, saying the need for best-on-best competition is absolutely there. Hedberg continued by elaborating on the Olympics, saying it is the players who want this as well, and it will be them who will ultimately decide if they will be playing in Sochi in 2014.

Hedberg then used the FIFA World Cup as the model that hockey should adopt with the Olympics, saying that the soccer tournament is the most popular sporting event, but that it all revolves around having the best players in the world there. Hedberg also suggested taking some of the NHL's dwindling franchises and putting them in some of the most hockey-popular European cities, claiming it could be the turning point for hockey across the Atlantic.

The CBC's Glenn Healy, a retired NHL goaltender and former director of player affairs for the NHLPA, continued the discussion by stating that the NHL's participation in future Olympics should not be considered a bargaining chip between the league and the union because the biggest NHL stars will go anyways, and that it is the players who are “pushing the envelope on this and saying ‘yeah, I want to be a part of this and I want to grow this globally.'”

At the same time, Healy also suggested several tweaks to the Olympics, namely better medical and marketing access for NHL clubs to the players, who are coordinated by and in direct contact with only the IIHF to themselves during those two weeks. Too much money is made by hockey in the Olympics, Healy said, for anyone to say that more cannot be done for the players who provide the product. Healy also suggested that the World Cup seize February as an opportunity to do the same for the tournament with fans.

Paul Romanuk, a broadcaster for over 25 years in both Canada and Europe and currently based in London, England, touched on the need “for a meaningful club championship in Europe” as he feels that there is value in developing that into something worthwhile and then involving NHL club teams, once it has prestige of its own. Romanuk described it as the “hockey form of the Champions League of soccer, which is a massively successful marketing vehicle, as well as something that just captures the hearts and minds of soccer fans all across Europe.” Romanuk continued by suggesting that a Global Hockey Week should be held in place of the NHL All-Star week, bringing together all of the leagues and stakeholders of the game in one place, “focusing the eyes of the world for one week on this great game.”

Ouellet also continued on a point first brought up by Healy, saying that the Olympics would not be used as a chip in collective bargaining and that “the players have never admitted that they would be giving anything up in order to go play in the Games, so people should recognize that it won't be a huge bone of contention and that it won't be used against them as a bargaining chip.”