After recently reaching the 1,000 games played plateau, Cory Stillman is back in Carolina after a trade from Florida and eager to make a Stanley Cup push with the Hurricanes, a team he helped to a title in 2006. 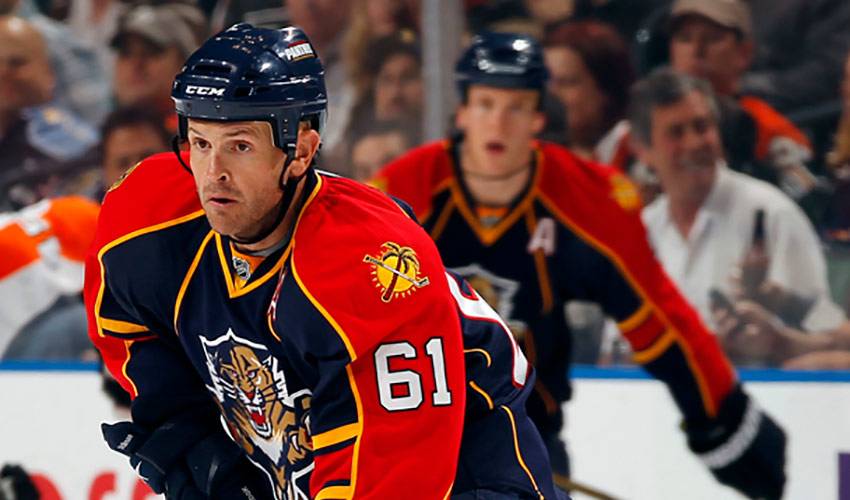 Even after 1,000 NHL games, Cory Stillman, who was traded back to the Carolina Hurricanes on February 24, still gets the same feeling every time he opens the door to the dressing room.

It doesn't take long into the conversation for Stillman, who appeared in his NHLPA-recognized 1,000th NHL game on February 16, to admit his fondness for the big-league game he has been part of since 1994-95.

“Every time I get to the rink, I still feel young,” said Stillman, who became the latest NHLPA member to hit the four-digit mark in games-played, reaching the milestone on February 17 against the Philadelphia Flyers. “I love going to the rink. As long as I feel as though I can compete with the guys out there, I'll play. I'll know when the time comes to say goodbye.”

Stillman grew up in Peterborough, Ontario playing hockey for the Minor Petes (OMHA) program. He also played competitive baseball. In 1989–90, he was a member of the Peterborough Roadrunners Jr.B. (MTJHL) hockey club before he was selected 27th overall by the Windsor Spitfires in the 1990 Ontario Hockey League Priority Selection.

The left-winger played two seasons in Windsor before completing his OHL career with his hometown Peterborough Petes.

Stillman began his professional career in 1992, the year he was drafted sixth overall in the first round by the Calgary Flames. During the 2000–2001 season, he was dealt to the St. Louis Blues where he played for three seasons. At the 2003 entry Draft, he was traded to Tampa Bay where he helped the Lightning win the Stanley Cup in June 2004.

During the free agent signing period following the end of the 2004–2005 NHL lockout, Stillman agreed to a three-year contract with the Carolina Hurricanes on August 2, 2005, winning a Stanley Cup in 2006. He became the first player since Claude Lemieux to win consecutive Cups with different teams and the sixth overall to do so.

On February 11, 2008, he waived his no-trade clause, enabling the Hurricanes to trade him, along with Mike Commodore, to the Ottawa Senators for Patrick Eaves and Joe Corvo.

On July 1, 2008, Stillman signed a three-year deal with the Florida Panthers.

“Here I was hoping it would be great to play one year in the NHL,” Stillman told NHLPA.com. “And then there was a time where I thought it would be great to play maybe four, five or six years. But it's flown by. Now, it's 16 years later and I'm still doing it. It's been amazing. Sure, there have been some disappointments along the way, but you take the good with the bad.”

“Someone asked me what my top five NHL moments are,” recalled Stillman. “Obviously, your first game, your first goal and winning two Cups are the first four that immediately come to mind. And now I can say that I played in 1,000 NHL games.”

There have been plenty of lessons learned, on and off the ice, throughout Stillman's time in the NHL, including coming to terms with the business side of the game.

“You really do learn as you go,” said the 1991 OHL Rookie of the Year. “The first trade is always tough. You tend to take it hard. But then you realize that someone wants you. It really has worked out great for me. I'm very lucky.”

Not bad for a kid from Ontario who dreamed of sharing the ice with his childhood idols.

“Being from Canada, it's quite strange that you go from playing on the outdoor rinks or playing on the road, dreaming that you are playing in the NHL, to actually sharing the same ice as some of those players you looked up to.”

Stillman's enthusiasm for the game will no doubt be a huge boost to the Hurricanes who find themselves in a dogfight for an Eastern Conference playoff spot.

It's one of many things that make the alternate captain a respected veteran in NHL circles.

“I love seeing the energy the young players bring with them,” he said.

Which begs the question, ‘What would Stillman like to see as his sixth greatest NHL achievement?'

Stillman saw fit to answer it with a question of his own.

“How about winning another Stanley Cup?” he said with a laugh. “You never get tired of winning a Stanley Cup.”