The men behind the beards

Would I participate in Beardathon again? Absolutely, without question! 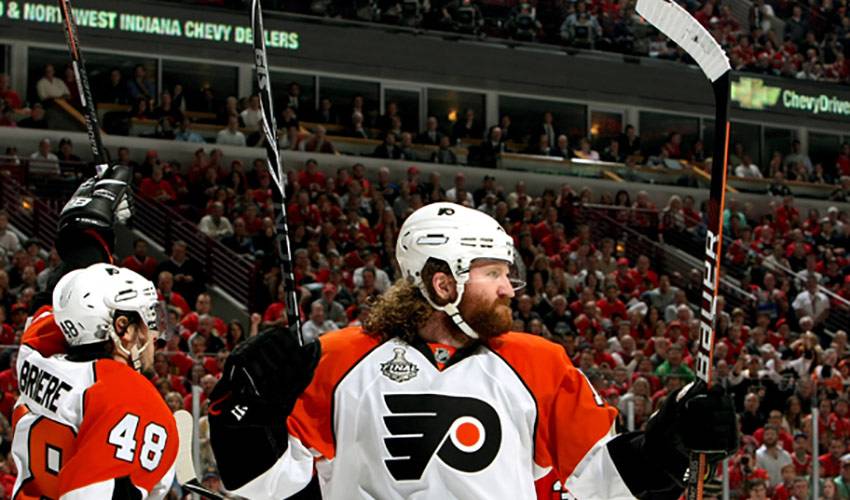 NHLPA.com  received feedback from its participants throughout the NHLPA  Beard-a-thon, expressing their thoughts on their beards, raising money for the Heart and Stroke Foundation and what the initiative meant to them. Here are some of those thoughts:

GARY COSTA – North York, ON: “I've been growing a playoff beard for the last five Cup runs for the Canucks and was planning on growing this year anyways, but when I heard about the Beard-A-Thon and the fact that it was in support of the Heart & Stroke Foundation, I decided that I really wanted to participate, because my Dad has heart issues and I wanted to show my support.”

CHRISTOPHER GOLDEN – Richmond, BC: “I'm sure if you were to speak to my fiancée, she would come up with a laundry list of items to what is annoying with my playoff beard.  Yet the only annoyance I've had is the fact as we've seen the weather warm up out here on the west coast, the beard has been keeping me warmer than I would like this time of year.”

KRIS ALLEN – Halifax, NS: Would I participate in Beardathon again? Absolutely, without question! This was such an easy way to fundraise and it's for a great cause. As much as I'm looking forward to a clean shave, I'm equally looking forward to starting from scratch and growing the playoff beard again.
The men behind the beards

With the 2010-11 NHL playoffs in the books following the defeat of the Vancouver Canucks by the Boston Bruins, the NHLPA Beard-a-thon is also successfully wrapped up after two fantastic months of fund-raising. Having raised close to $200,000 for the Heart and Stroke Foundation, the nearly-600 beard growers who contributed to the initiative should be very proud of their efforts. While the donation leaderboard is filled with familiar names of NHLPA members, there are plenty of beard-growers who deserve attention and accolades for the work they have done to help put more Automated External Defibrillators (AEDs) in hockey rinks and communities across the country.

The NHLPA Beard-a-thon benefited greatly from the support of the NHL players and hockey fans who signed up and grew beards, the generous people who donated to the cause, as well as the Heart and Stroke Foundation of Canada. For many, whether it was those growing or those donating, the cause hit close to home and they had personal motivation to help out. With 597 beard-growers involved, there are almost as many personal stories you could tell about the devastating impact of strokes and heart disease.

The Philadelphia Flyers' Scott Hartnell, who served as the “Chairman of the Beard” throughout the initiative, is a prime example of someone whose life was affected by the impact of a stroke. Hartnell's mother, Joy, suffered a stroke in 2001 and the big left-winger was more than happy to help as a result. With over $12,000 received during the playoffs, Hartnell finished atop the donation leaderboard, nearly doubling his next closest competitor, Ryan Kesler of the Vancouver Canucks.

“I'm thrilled to see all of the support my own beard received for this worthwhile cause,” Hartnell said of his beard-growing efforts. “I hope to grow an even better one next year.”

Hartnell's work is not completely done in terms of the NHLPA Beard-a-thon either, as he is set to host the top fundraising non-player, Craig Northey, at one of his team's games - of Craig's choice - next season.

Northey, of North Vancouver, BC, ended up receiving donations totaling over $3,181 for the Heart and Stroke Foundation, earning him the grand prize trip. A singer and guitarist for the "Odds", which served as the house band at Rogers Arena during their long playoff run this season, Northey also had a connection to the charity through one of his friends in the music industry. Dan Achen, formerly a guitarist for Junkhouse and close friend to the members of the Odds, passed away from a heart attack in March of last year while playing hockey with friends in Hamilton, ON. With Achen in mind, all four members of the band (Northey, Doug Elliott, Pat Steward and Murray Atkinson) grew out their beards and did their parts to try and help limit unfortunate deaths like Achen's as much as possible.

“When they told me about the Beard-a-thon and what it was for it seemed like a no-brainer,” Northey said following the playoffs. “Last year, on the ice, the Canadian music community lost a great friend and innovator in Dan. We, his Odds buddies, thought the Beard-a-thon would be a fun way to raise awareness and generate some funds. We were all really impressed with how well the system worked and how many people could instantly relate to the cause.”

The third name on the overall NHLPA Beard-a-thon leaderboard, between Kesler and Boston's Patrice Bergeron, is Stephen Sax, with $4,300 raised during the initiative. Sax, whose status as an NHLPA employee in its Finance Dept. made him ineligible for prizes, was still thrilled to have done so much for a cause close to him. Sax suffered a stroke at the age of 28 last August, and coming from a family with a high history of strokes, he has first-hand knowledge of how serious they can be and how far research has come with the disease.

“It was so important for me to raise money for this cause and for the Heart and Stroke Foundation,” Sax told NHLPA.com following the end of the playoffs. “Due to my connection with the Heart and Stroke foundation, I set a lofty goal of $1,500 and was amazed to see that I passed that mark in just over 24 hours. It was great to see my name near the top of the Leaderboard the entire playoffs with hockey stars, such as Scott Hartnell and Ryan Kesler and want to thank the support of my family and friends in helping me raise over $4,000 for the cause.”

With 2,225 pledges received by the 597 growers in the two-month span of the Beard-a-thon, the inaugural year of the initiative was greatly supported by Canadians from coast to coast. Undoubtedly, the  NHLPA owes many thanks to all who were involved and hopes to see more fantastic participation when the playoffs gets going again next season.