Taking Pride in Producing in Edmonton 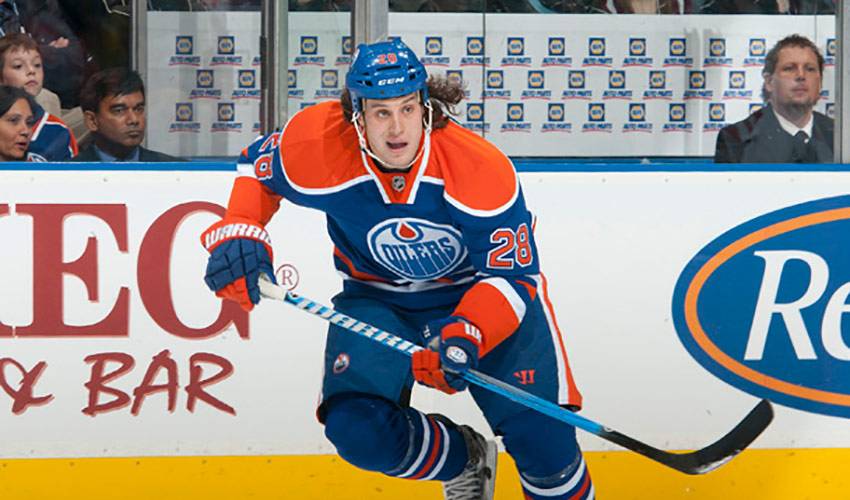 doesn't come down to goals and assists.Ryan JonesThe game of hockey might be all about numbers, but the impact of

He's certainly capable of providing offence as shown in his 18-goal campaign in 2010-11, his first full season with the Edmonton Oilers.

For Jones, the 111th overall selection of the Minnesota Wild in the 2004 NHL Entry Draft, success isn't governed by what shows up on the scoresheet.

“It's funny that in many ways you're judged by goals and assists and other numbers,” said Jones, who grew up in Chatham, Ontario playing minor hockey for the Chatham Cobras A program of the OMHA, moving up to play AAA hockey for the Chatham-Kent Cyclones of the Pavilion League before playing two seasons with the Chatham Maroons Jr.B. of the OHA. “But doesn't mean your game should be measured that way.”

Rather, Jones, who earned a scholarship at Miami University in Ohio, spending four years with the CCHA team, sees it in a much different light.

“When you are able to combine being able to chip in offensively with being responsible at your own end of the rink, it can be really effective,” said the 6'1”, 205-pounder, who made his NHL debut with Nashville Predators in the 2008–09 season opener, scoring his first NHL goal on October 15, 2008 against the Dallas Stars. “You take just as much pride in producing offence as you do in taking away chances.”

That's been his calling card since coming to the Oilers when he was claimed off waivers on March 3, 2010 by the Western Conference club.{{QUOTE}}

It's been a perfect fit for both.

In 81 games with the Oilers in 2010-11, Jones finished the season with 25 points and posted a plus-five rating. He scored his first goal of season on October 10, 2010 versus Florida.

Jones has played a strong role in helping Edmonton, who haven't made the playoffs since 2005-06, finishing last overall the past two campaigns, enjoy a strong start to the 2011-12 season.

The 27-year-old, who had 49 points in 42 games during his final collegiate season with Miami University, was buoyed by what he saw in the Oilers even before the regular season got underway.

“Obviously, it's been tough the past little while, but you got a sense that there was a confidence and belief that the tide was turning, even in training camp,” said Jones, who is nearing the 200 games-played mark at the NHL level. ‘You looked around the room and saw the young talent we have mixed with the veterans and you saw more than enough reason to be optimistic.”

So, where does Jones fit in when it comes to his status?

Most importantly, however, Jones is looking to do his part to get the Oilers back in the playoff picture.

Yet despite Edmonton's promising beginning, he's not ready to start thinking far beyond their next opponent.

“You just can't do that,” offered Jones. “We know that every game is key, every opponent is tough and netting a playoff spot isn't easy. We're confident in one another and there is a feeling if we stay on course, it could be a good year for us.”

A year that Jones is hoping he can do a little bit of everything, including taking on the task of neutralizing their opponents top players.

It's a role he relishes.

“Any time you can take a shift and stop the opposition from gaining any kind of momentum, that's a great feeling,” said Jones, who played 18 minutes, had one assist and was a plus-one in Edmonton's recent 3-1 road win against the Colorado Avalanche. “It's a challenge you embrace.”

Jones would love nothing more than to be able to put those skills to test once the playoffs get underway. A trip to the post-season would represent his first at the NHL level.

“That's what you play for,” offered Jones. “It's all about building towards making that a reality. When you look around our room, you know that's what everyone wants. And it's good to know we've got the guys who can make it happen.”

That group would include Ryan Jones, who might not approach the game from a numbers point of view, but a player who always manages to make a point.