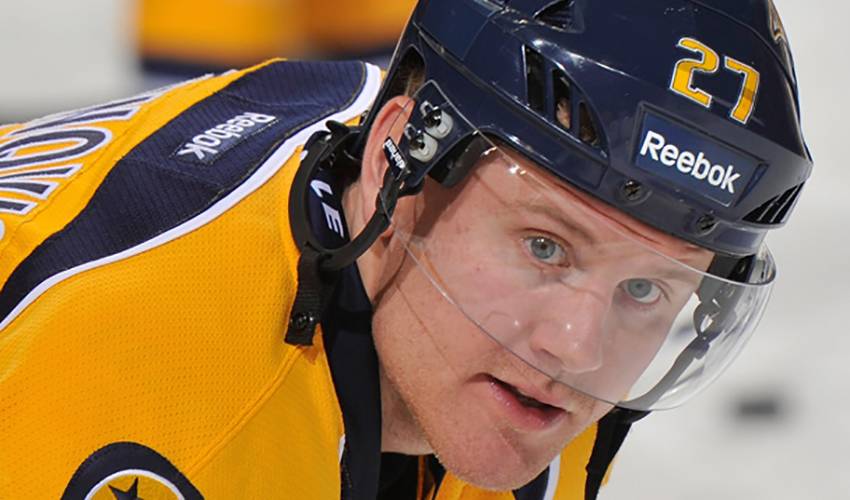 Up until the past little while, it seemed as though Patric Hornqvist couldn't buy a break on the ice. But a recent run of good fortune, both personally and professionally, has seen the talented Swede piling up the points in Nashville.

Hitting the post, getting robbed by a ridiculous save, having a sure goal blocked by a skate – it seemed as though Hornqvist, now in his fourth season with the Predators, was snakebitten at every turn in 2011-12.

“I don't think I'm playing badly, the chances are coming,” said the 230th overall selection of Nashville in the 2005 NHL Entry Draft, in a recent conversation with NHLPA.com. “It's been one thing or another where it just hasn't gone my way some nights. But that's only something that's going to make me work harder. Maybe I'll make my New Year's resolution to start getting some more points.”

While Hornqvist was joking, he's kept his word.

Perhaps he can trace his recent performances, two assists in a win against Calgary and a two-goal performance (plus a disallowed goal that would have given him a hat trick) versus Carolina, to events away from the rink.{{QUOTE}}

Hornqvist's girlfriend gave him quite the New Year's and birthday gift when she secretly flew three of his friends in from Sweden to Nashville. After celebrating New Year's Eve together, the group also celebrated the right winger's 25th birthday on January 1.

One day later, Hornqvist tallied his two assists in the victory over the Flames.

“I guess it should be my birthday every day, right?” offered the forward, who was Swedish hockey's Elitserien Rookie of the Year in 2007 after a successful second season with Djurgården's top team, scoring 23 goals and notching 34 points. “I always knew that if I stayed with it and did the things that helped me be successful in the past, things would turn around.”

Hornqvist, who scored his first NHL goal on October 15, 2008 against the Dallas Stars, in one of his 28 NHL games that year, turned heads in the 2009–10 season, leading the Predators in goals (30) and tying for the team lead in points with 51.

Last season, he had 48 points, including 21 goals, for the Central Division club.

“I want to be able to contribute offensively and in on other ways, but the one and only thing that matters is that we can enjoy success as a team,” noted Hornqvist, who showed his offensive flair when he netted 17 goals and 35 points for the Milwaukee Admirals of the American Hockey League in 2008-09. “We are a team that works well together and when we all do our roles, we are effective.”

Hornqvist is at his most effective when he's setting up shop in front of the opposition's crease. And while he has to dodge shots from the point and the attention of his opponents, the 5'11”, 190-pounder continues to do his job well.

In fact, his pair of goals against the Hurricanes came from right front of the net.

“I don't think I'm the most popular guy out there for doing that, but that's the key for me and that's what I enjoy doing,” said Hornqvist, who is once again on pace for a 20-plus goal campaign. “I like the chance to get in close and create some chances.”

He's hoping those opportunities add up to a playoff berth and a shot at bringing Nashville its first Stanley Cup.

“We are a very hard-working team,” offered Hornqvist. “That's what defines us and that's what makes us tough to play against. We want to be that team that hustles every shift and is capable at both ends of the rink.”

Nearing the half-way mark of the 2011-12 season, the veteran of nearly 230 NHL games isn't thinking about anything to do with the playoffs, at least for the time being.

“We all know that every year it's always very close in the conference and the difference between making the playoffs or not making the playoffs can come down to a few points,” offered Hornqvist “We've tried to focus on our next game. Whether you win or lose, you don't dwell on it. You can't get too carried away when you win and you can't get too down on yourselves if you lose.”

Hornqvist, however, wouldn't mind having a few more nights like the recent ones he's enjoyed.

“That would be fine with me,” he said. “Scoring points is great, but it's even better when you score points and the team wins. That's a great feeling.”

A feeling Patric Hornqvist is certainly becoming accustomed to.