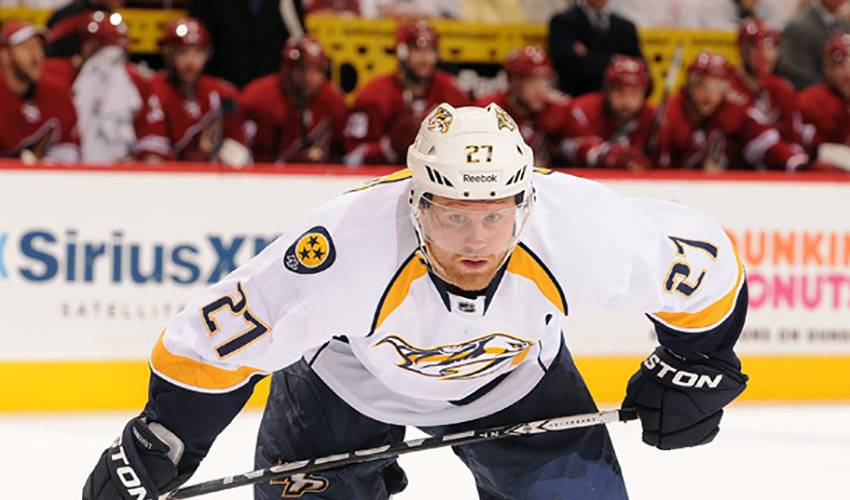 Watching highlights of the smile on his face, the emotional reaction of both his teammates and the Nashville fans put the Predators' first-round triumph over the Detroit Red Wings in perfect perspective for Patric Hornqvist.

Just hours removed from Nashville's five-game quarter-final triumph over Detroit, Hornqvist, who had 27 goals in the regular season, was still abuzz over the impressive showing.

“We're all excited,” said the right-winger, who had one assist in the first round, along with 12 shots. “Detroit is a big rival. They have been for such a long time. I'm just so happy with the way we played. Everyone gave everything they had. We're not done yet. We know that. We'll enjoy this for a couple of days and we should. But then it's back to business and time to get ready for the second round.”

It was an anxious few moments for Hornqvist and the Predators in the waning seconds of Game Five, but a key face-off win in their own zone by Mike Fisher kept Detroit at bay in the series-clinching 2-1 win.{{QUOTE}}

Hornqvist, who came into this year's playoffs with just 14 games of post-season experience, was eager to get to Fisher after the final buzzer sounded.

“I wanted to go over to Mike and just tell him what he great job he did to win that face-off,” Hornqvist told NHLPA.com, the morning after Nashville's victory. “That's the type of effort we've been getting from everyone. Maybe our top line wasn't scoring as much in the first round, but they made sure they did everything else. Guys like Fisher and Martin Erat, they were blocking shots, hitting, doing whatever they could. That's what you need to win.”

Nashville bested Detroit for the first time in three playoff series. It was the earliest ousting for the Red Wings since a six-game, first-round defeat to the Edmonton Oilers in 2006.

Hornqvist, the 230th overall selection in the 2005 NHL Entry Draft, saw a different Nashville squad in 2011-12 than from year's past. Promising regular seasons were followed by playoff disappointments.

Not this time. This year's version of the Predators is brimming with confidence.

“That's the word I would use…confidence,” said the 25-year-old native of Sollentuna, Sweden, who had seven points in 28 games for the Predators in 2008-09, his rookie campaign with the Central Division club. “There was a time this year when we were down to Columbus and we managed to come back and win. There were also a few other times we were down and we stayed strong and came back to get two points. When you are able to do things like that, it makes you believe in yourselves. And that's what we saw this year. We have so much confidence and we trust each other.”

A major reason for their confidence comes between the pipes, in the form of Pekka Rinne, Nashville's big goaltender (he stands 6'5”) who was sensational against the Red Wings.

“We have the best goalie in the league,” praised Hornqvist, of the Finnish netminder, who allowed just nine goals against Detroit. “He was awesome for us. Really, everyone is just very happy. We're happy for each other, the organization and for the fans. But we know there is much more to do and it will only get more difficult. We know we have to be even better and stronger next round.”

The man who led the Predators with 30 goals in 2009-10 will remind himself of what it took to get past one of hockey's most consistent teams.

“Detroit has so many good players and they have always been a tough team for us to beat,” said Hornqvist, of the Original Six squad that has made the playoffs 26 of the last 28 seasons, including 21-straight appearances, the longest streak of any major league sports team in North America. “We knew what it would take to beat them. It wasn't easy, but we stuck to the gameplan.”

Hornqvist is hoping that blueprint for success carries over into the Western Conference semifinals against a rival that has yet to be determined.

“You can be happy with what you accomplished, but it doesn't take long for you to resume your focus and be mentally and physically prepared for what comes next,” said the forward, who had 21 goals and 48 points in 2010-11. “We feel good and we are all determined to keep the momentum going.”