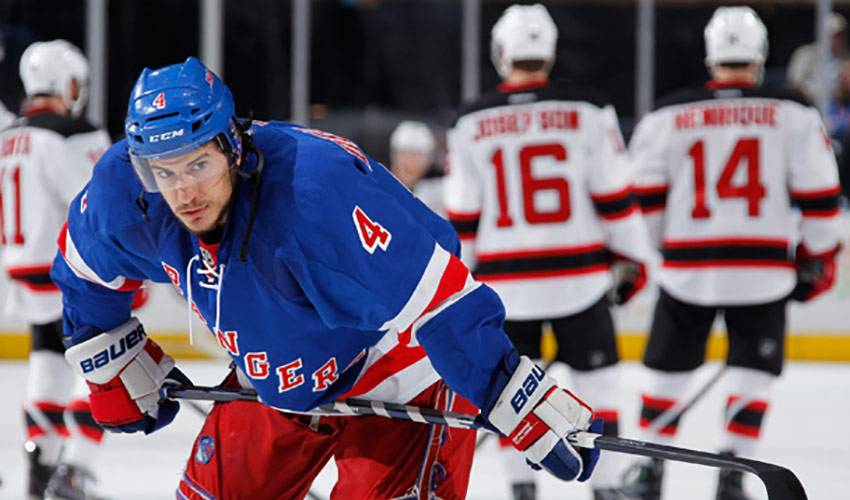 When you speak with Michael Del Zotto, the New York Rangers up and coming star defenceman, you can still hear some disappointment in his tone over not playing for the Stanley Cup in 2011-12. But you also hear a confidence that he and his Rangers teammates can achieve their goal sooner rather than later.

After a stellar regular season that saw the Rangers secure the No. 1 seed in the Eastern Conference, it appeared as though the Blueshirts were poised to make some noise in the playoffs.

In the first round, the Rangers squared off against the eighth-seeded Ottawa Senators. After falling behind 3-2 in the series, the Rangers won Game Six in Ottawa, as well as Game Seven at Madison Square Garden, sending them to the second round against the Washington Capitals.

The Rangers escaped being down three games to two after defenceman Marc Staal scored only 1:35 into overtime, giving New York the series lead.{{QUOTE}}

They went on to win the series in seven games, courtesy of Del Zotto's overtime winner in the 2-1 triumph, putting them to the Eastern Conference final for the first time since 1997.

With the New Jersey Devils standing in their way of making it to the Stanley Cup Final, the Rangers weren't able to get the best of their rivals, bowing out in six games.

“We had such a good year,” said Del Zotto, of the 51-win, 109-point campaign. “There are never any easy games at any point in the season, but we felt confident in one another and what we could do. It wasn't for lack of effort. We have a team where everyone wants to step up and deliver their best game. Unfortunately, it didn't work out the way we hoped.”

It was the first taste of NHL playoff action for Del Zotto, the 20th overall selection of the Rangers in the 2008 Entry Draft.

“You just hope to do something that can have a positive effect on the outcome of the game,” said the blueliner, who made his NHL debut at the age of 19 against the Pittsburgh Penguins on October 2, 2009, becoming the youngest defenceman in Rangers history to play on an opening night, netting his first NHL goal the next day, against the Ottawa Senators. “It's obviously very intense and you have to be confident when you're called upon. You're going to make mistakes, but you don't have time to dwell on them. You just have to get right back out there and have faith in yourself.”

Del Zotto certainly has plenty of faith in what he believes the Rangers can achieve.

“It's disappointing we didn't go further, but when you look at the group we have, the balance of young talent, veterans and great goaltending, we know what we are capable of doing,” said the Ontario native, who grew up just outside of Toronto and was a diehard Leafs fan. “You look at what we could improve on and you look at what we have in place and that makes you optimistic about the future.”

The future looks bright for Del Zotto, who endured a tough 2010-11 season, after a strong rookie campaign one year earlier, in which he appeared in 80 games, contributing 37 points.

He's hoping next season gets even better.

“You always look back at the year and go over things to find what you can improve on,” said Del Zotto, who was named the NHL's Rookie of The Month for October 2009 after posting 12 points in his first 14 professional games, going on to be named to the 2010 NHL All-Rookie Team.

“We did a lot of good things this year, but we know we can be even better in 2012-13. We have a determined group of guys that would love nothing more than to bring a Stanley Cup to New York.”

So, while it wasn't the ideal ending to the year for Del Zotto and his teammates, one of the league's brightest young defencemen is up for the upcoming challenges.

“You relax your mind and body for a bit in the summer, but you always have that excitement about getting back on the ice and playing again,” admitted Del Zotto. “You can always learn something in this game.”

Including the confidence the Rangers have what it takes to be considered Stanley Cup material.