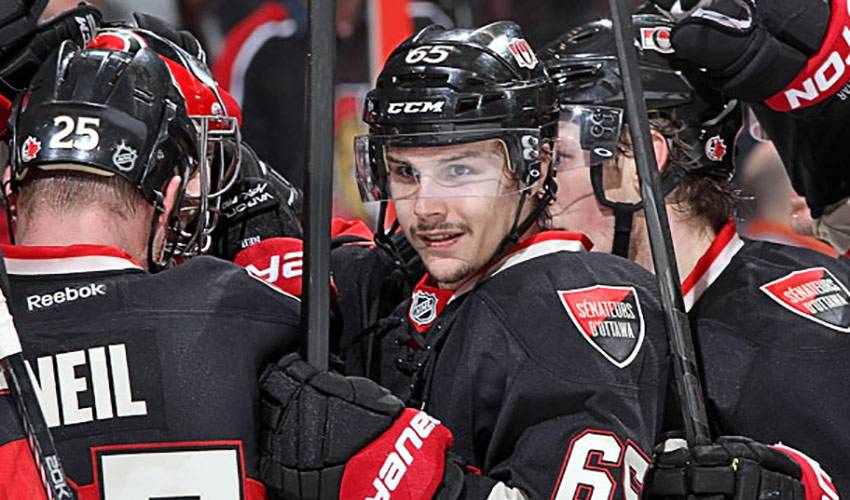 Heralded for his superb playmaking and savvy offensive skill, Erik Karlsson, last year’s Norris Trophy winner, is just as focused on fine-tuning the defensive side of his game.

To say that Karlsson’s 2011-12 NHL campaign was impressive would be a massive understatement. For starters, Karlsson set a Senators' franchise record for points in a season by a defenceman with 78. There was much more. Karlsson also skated in his second All-Star Game, was selected as a First Team All-Star, took league top defenceman honours and won the Viking Award, given annually to the best Swedish hockey player in North America. “I guess it was a pretty good year,” Karlsson told NHLPA.com. “I’m lucky to have found a great team to play with. When your teammates and coaches believe in you and what you can do, it gives you so much confidence.” But, as Karlsson quickly points out, not too much of it. “I don’t look at one thing in particular in my game that I want to improve on,” said the 15th overall selection of Ottawa in 2008. “I always try to step back and look what I can do to be better. When you are out on the ice playing against the best players in the world, you need to be strong in every part of your game.” And for the 22-year-old, that means playing his part in keeping the puck out of the net. “It’s important that you are able to be good defensively, too,” said Karlsson. “It’s always nice to contribute offensively, but I take pride in being good in my own end. I just try to look at every part of my game, really.” Off to another strong start, (Karlsson had nine points in 11 games as of February 8), the man who scored his first NHL goal on December 19, 2009 against the Minnesota Wild, is eager to see the Senators build off a 2011-12 campaign that saw them finish eighth in the East and take the first seed New York Rangers to seven games in their first-round playoff tilt. “It was a good year in many ways, but we would have liked to have gone further,” said Karlsson. “We wanted to build on what we did and be even better this year.” The blueliner knows they’ll have the support of those who fill the seats. “From the first day I got here, the fans have always been great,” noted Karlsson. “Even two years ago, when we had a bad year, they still supported us. Every time someone has come up to me on the street, it’s never been negative. They always have something nice to say.” So, too, have Karlsson’s fellow countrymen. “All Swedes, they are polite,” he offered. “When I first started in the NHL, a lot of the guys from back home would say, ‘How are you doing?’ or ‘good luck’ when I saw them for the first time on the ice.” Good manners aside, Karlsson is still a competitive athlete, even outside the arena. “I’ve played tennis back home with (teammate) Daniel Alfredsson and (New York Rangers goaltender) Henrik Lundqvist. I only started playing a few years ago. They are better than me.” But… “I’ll beat them one day,” he laughed. “You know, once they are older.” Leave it to Erik Karlsson to keep working on his game.