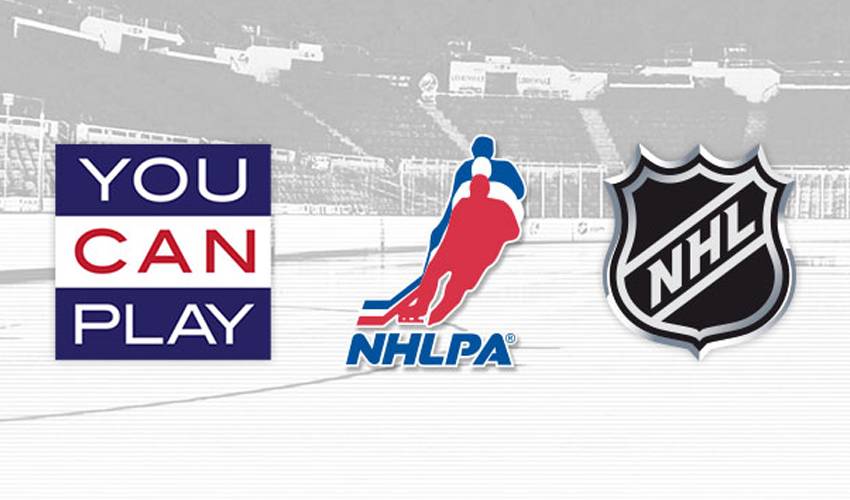 “The NHL sets the standard for professional sports when it comes to LGBT outreach and we are incredibly grateful for their help and support,” said Philadelphia Flyers scout Patrick Burke, the founder of the You Can Play Project, an advocacy organization that fights homophobia in sports. “We will work with League and NHLPA officials, teams and players to ensure that we create a more inclusive hockey community at all levels.” Said NHL Commissioner Gary Bettman: “Our motto is 'Hockey Is For Everyone,' and our partnership with You Can Play certifies that position in a clear and unequivocal way. While we believe that our actions in the past have shown our support for the LGBT community, we are delighted to reaffirm through this joint venture with the NHL Players’ Association that the official policy of the NHL is one of inclusion on the ice, in our locker rooms and in the stands.” “NHL players have supported the You Can Play Project since its inception, which we are pleased to formalize and expand upon with today’s announcement,” said Don Fehr, NHLPA Executive Director. “The players believe our partnership with the NHL and You Can Play will foster an inclusive hockey environment from the grassroots level to the professional ranks.” The official partnership with You Can Play includes a significant commitment to education and training for teams, players, media and fans plus the production and broadcast of more public service announcements. “As NHL players, we all strive to contribute towards helping our teams achieve success on the ice. Any player who can help in those efforts should be welcomed as a teammate,” said Ron Hainsey, Winnipeg Jets defenseman and NHLPA Executive Board member. “This partnership solidifies the message that the hockey community believes in fairness and equality for everyone.” You Can Play will conduct seminars at the NHL’s rookie symposium to educate young prospects on LGBT issues. In addition, You Can Play will make its resources and personnel available to each individual team as desired. The NHLPA and NHL also will work with You Can Play to integrate the project into their Behavioral Health Program, enabling players to confidentially seek counseling or simply ask questions regarding matters of sexual orientation. The You Can Play Project, founded by Philadelphia Flyers scout Patrick Burke, celebrated its one year anniversary on March 4, 2013. From its inception, it has had tremendous support from the hockey community and beyond. Professional players Tommy Wingels and Andy Miele, and former NHL General Manager Brian Burke all serve on You Can Play’s Advisory Board. Over 100 professional hockey players have voiced their support for gay teammates and have been joined by athletes from numerous sports representing approximately 20 NCAA organizations.

“This partnership between the players, the league and You Can Play reinforces the simple point that anyone who can play hockey should be afforded that opportunity.” – Craig Adams, Pittsburgh Penguins forward and NHLPA Executive Board member

“We're excited to announce our partnership with the NHL with a great initiative. This progress is long overdue, as who you are should not affect what you can do. We hope to welcome everyone to the game of hockey.” – Kevin Westgarth, Carolina Hurricanes forward and a member of the NHLPA’s recent Negotiating Committee