He might not have a point in this year’s Stanley Cup Playoffs, but Clayton Stoner has made a point of being a sound contributor in Anaheim’s championship quest. 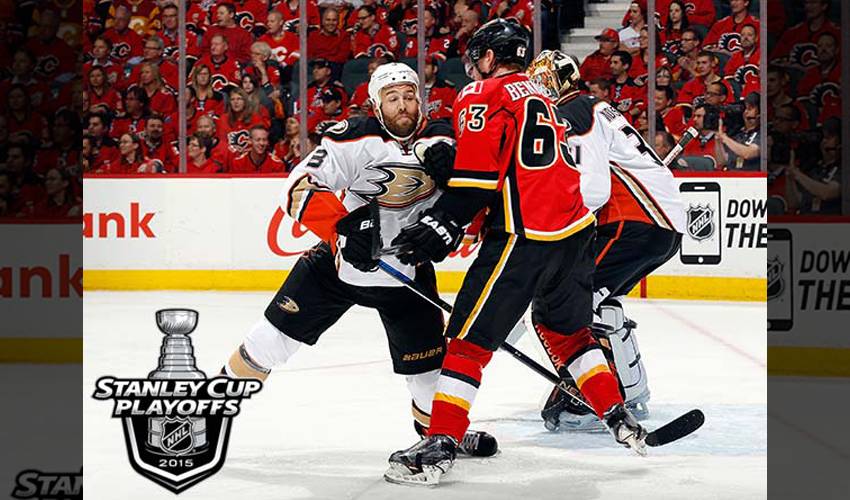 He might not have a point in this year’s Stanley Cup Playoffs, but Clayton Stoner has made a point of being a sound contributor in Anaheim’s championship quest.

Offence isn’t the name of his game, but shutting it down most certainly is.

After appearing in 69 regular season games in 2014-15, his first campaign with the Pacific Division squad after signing as a free agent in July of last year, Stoner has continued to deliver in the playoffs.

Steady defensive zone work, solid physical play and winning battles inside the Anaheim blueline – Stoner has done it all for the Ducks.

“A good shift for me involves being physical, sometimes a big hit or being strong in front of my net or a good corner battle,” said the 30-year-old defenceman. “Also, breaking the puck out clean out of our own end and making a good pass to get to the offensive zone. When I’m in the offensive zone, I try and keep the puck in and get shots through to the net.”

In nine games through the first two rounds of the playoffs, Stoner has a plus-two rating. He ranks sixth among defenceman in hits with 30 and has 16 blocked shots.

His greatest source of pride, however, is in the combined efforts of a team that secured the No. 1 seed in the West after a 109-point season.

“I’m impressed by how different guys have stepped up in different games,” noted the British Columbia native. “We have scoring throughout our lineup. I’m also impressed with how we come back after being down a goal. We don’t have panic. We have confidence that if we stay the course, we will be successful.”

Small wonder that Stoner is reveling in his first post-season experience in a Ducks’ uniform.

“It was great coming to Anaheim,” said Stoner, originally the 79th overall pick of the Minnesota Wild in 2004. “It’s a great team with a bunch of fun guys. Everyone was welcoming and treated me well from day one.”

A team that includes Matt Beleskey, one of the Ducks’ most consistent offensive threats in the regular season and playoffs, a player Stoner was somewhat familiar with.

In March of 2013, the pair dropped the gloves for a spirited tilt.

Stoner is happy to see his teammate netting goals rather than registering jabs and uppercuts.

“I think ‘Ski and I had a laugh about it a couple of times,” said the former Tri-City Americans (NHL) alumnus. “It’s not something we bring up and talk about, though. We both play hard and I respect the way he battles on the ice.”

Anaheim, who won the Stanley Cup in 2007, face-off against the Chicago Blackhawks, with the winner taking on either Tampa Bay or the New York Rangers in the final.