NHLPA Community Celebration to be held at Kalamalka Beach July 10

June 5, 2015
By:
City of Vernon BC media release
Media Releases

The City of Vernon, in partnership with the National Hockey League Players’ Association (NHLPA), Predator Ridge Resort and Vernon Jubilee Hospital Foundation (VJHF), announced on Friday that NHLPA members will be participating in the NHLPA Community Celebration, a community event and VJHF fundraiser at Kalamalka Beach on July 10 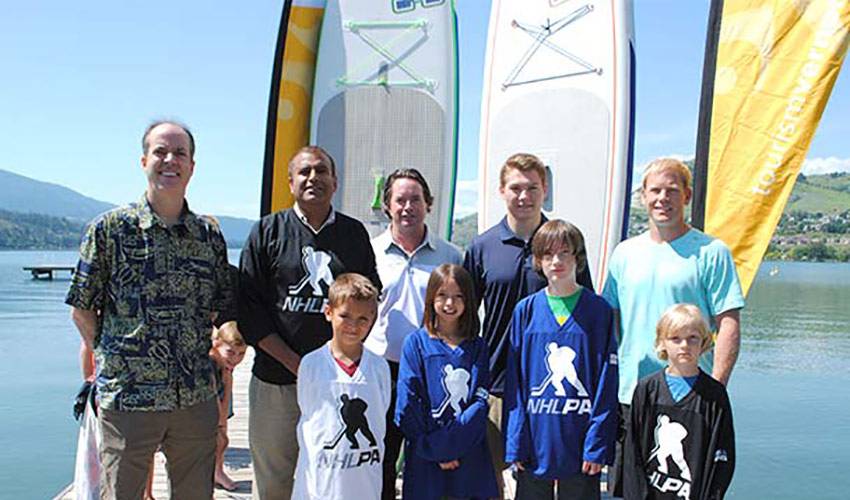 VERNON (June 5, 2015) – The City of Vernon, in partnership with the National Hockey League Players’ Association (NHLPA), Predator Ridge Resort and Vernon Jubilee Hospital Foundation (VJHF), announced on Friday that NHLPA members will be participating in the NHLPA Community Celebration, a community event and VJHF fundraiser at Kalamalka Beach on July 10 from 10 a.m. until 3 p.m.

The family-friendly NHLPA Community Celebration will feature a significant donation of hockey equipment made by the players’ NHLPA Goals & Dreams fund to local grassroots hockey programs, as well as live music, activities and an opportunity to meet current and past NHL players.

"NHLPA Goals & Dreams has helped tens of thousands of children around the world get a chance to play hockey, and will give back to more hockey fans right here in Vernon with the NHLPA Community Celebration event," said Curtis Lazar, NHLPA member and Vernon native. "I am proud to be here today representing the NHLPA, and I look forward to joining a number of fellow players at the NHLPA Community Celebration this July for what is sure to be a fun day celebrating our great game."

“I couldn’t be more pleased or more proud to be a part of the upcoming NHLPA Community Celebration,” said Vernon Mayor Akbal Mund. “The partnership between the NHLPA, Predator Ridge, Vernon Jubilee Hospital Foundation and the City of Vernon will provide tangible benefits to our community in the support it gives to VJHF and in showcasing the world-class Predator Ridge Resort. Vernon has produced a number of outstanding athletes that we are proud of—including Curtis Lazar and Dean McAmmond—and has a rich hockey culture, so I encourage the community to come out to support VJHF and meet their NHL heroes on July 10.”

“Predator Ridge is thrilled to be hosting the NHLPA Golf Classic and to be a major part of this civic celebration in a city so deeply rooted in hockey tradition,” said Brad Pelletier, Vice President, Okanagan, Wesbild. “We are grateful to the City and the NHLPA for their wonderful support and for rewarding the citizens of Vernon.”

Donors to the VJHF will receive meals and refreshments, as well as the opportunity to win a jersey signed by one of their favourite NHL players. Free parking will be available at Okanagan College, and shuttle service to and from Kalamalka Beach will be available.

More information on the NHLPA Community Celebration will soon be available on the City of Vernon website.