Shawn Matthias is certainly not unfamiliar with donning the blue and white colours of the Toronto Maple Leafs. But, these days, it’s more meaningful than ever. 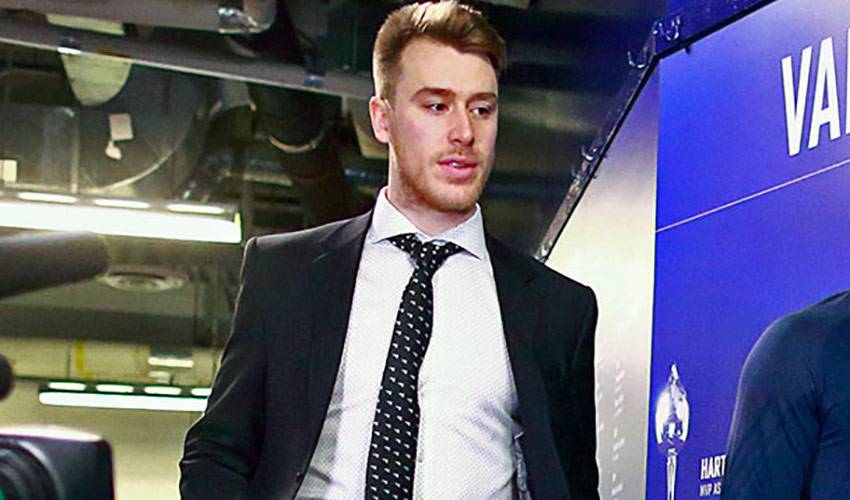 Shawn Matthias is certainly not unfamiliar with donning the blue and white colours of the Toronto Maple Leafs. But, these days, it’s more meaningful than ever.

There was no reading between the lines when it came to the @ShawnMatthias tweet that was posted at 11:13 a.m. on July 6.

In fact, it was pretty obvious how the free agent forward felt in the moments after he signed a one-year deal with the Original Six club.

All smiles today! Grew up cheering for the @MapleLeafs couldn't be happier to play for my hometown team! Can't wait to throw on that jersey!

Matthias had plenty of experience doing exactly that in his younger days.

“I grew up watching and cheering for the Leafs,” said the native of Mississauga, located just west of Toronto. “My dad (Brian) and all his friends were big Leaf fans, so we tried to watch as many games on TV as we could. My dad had a Mats Sundin jersey and my brother Steven and I both had home jerseys. This will be my first Leaf jersey with a name on the back. Pretty sweet it will be mine.”

Pretty sweet, indeed, for a player coming off a season in which he scored a career-best 18 goals, third highest on the Vancouver Canucks, while spending just 16 minutes in the penalty box.

“I think it's a great opportunity here to play for a great coach (Mike Babcock) and to play in a great hockey city,” said Matthias. “Playing in your hometown can be tough, but I think it's great place for me to grow as a player and play hard in front of lots of family and friends.”

Matthias was selected by the Detroit Red Wings in the second round of the 2006 NHL Draft, and was dealt to Vancouver as part of the 2014 trade that saw goaltender Roberto Luongo head to Florida.

In 408 career games, Matthias has recorded 131 points, including 69 goals.

“All my friends and family grew up watching the Leafs and when I was a kid I always dreamed of playing on the Leafs. If playing for your hometown team that you grew up watching doesn't get you excited to play, I should find a new job.”

Don’t expect to see Mathias filling out his résumé any time soon.

“I want to play the best that I can. I've been working hard to build off of last season,” he said. “Whatever role I'm given, I want to play it the best of my abilities. I'm excited to be playing at home and I'm ready for the challenge. It's exciting to say I'm a Leaf and I can't wait to get started.”

No word yet, however, if Matthias and his girlfriend have fitted their new black lab pup, Rocky, with any Maple Leafs gear.