Full recap of all the action from day one at the 2015 NHLPA Rookie Showcase. 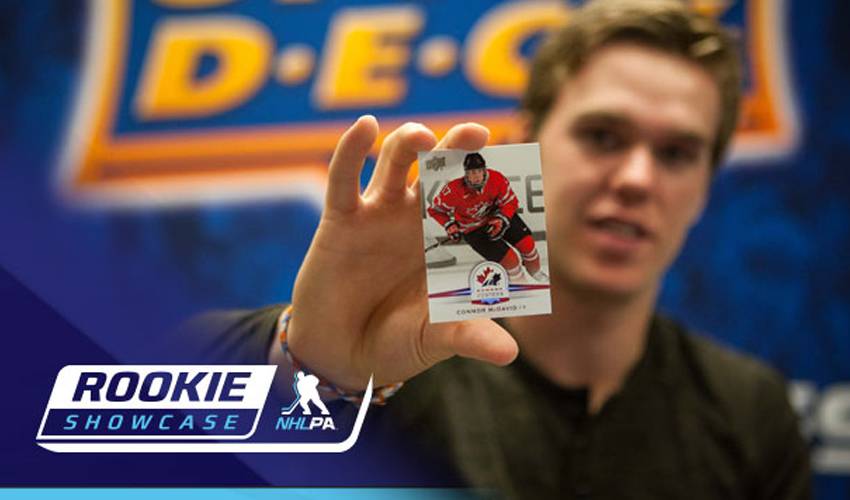 Every year before the puck drops on the NHL season, hockey’s future comes together for a unique event – the NHLPA Rookie Showcase. This event brings dozens of the game’s top prospects and rookies to Toronto for two days when NHLPA partners, including Upper Deck, Getty Images and EA Sports, get the chance to gather the photography, autographs, and video they will use in the creation of upcoming memorabilia and trading card items.

This year marks the seventh and largest Rookie Showcase to date with 39 highly-touted players in attendance, a list that includes: Connor McDavid, Jack Eichel, and Dylan Strome (the 2015 first, second, and third-overall draft picks.)

For day one, the players were split into groups upon arrival and filtered through a series of sessions led by Upper Deck and Getty Images. The groups signed hundreds of helmets, sticks and jerseys, that will be used for upcoming trading cards and other memorabilia products, as well as had several photos taken – both in and out of their team jerseys.

The day ended with a reception dinner and tour at the Hockey Hall of Fame in downtown Toronto. This casual setting allowed the young players the chance to walk amongst the fabled exhibits of hockey’s past, a first-time experience for many and one that may inspire them as they seek to begin their own NHL careers.

Jack Eichel playing against @upperdecksports at the Hockey Hall of Fame. #NHLPARookieShowcase

Day two kicks off Tuesday morning at the Mattamy Athletic Centre with both on and off-ice sessions. The players will gather with video game maker EA Sports for a head-scanning station that will allow them to be included in the next edition of the ‘NHL’ series video games. They will also take to the ice for one of the first times in their NHL team uniforms to skate and pose for their Upper Deck rookie cards. Later in the morning, many of the players will speak with a large media contingent covering the event at the former site of Maple Leaf Gardens.

Following these morning sessions, the group will then be split into two halves to showcase their high-level skills in the traditional friendly pick-up game. This is a great opportunity for the next wave of superstars to all take the ice at the same time and show off their elite skills.

They’ll finish the two-day event with a fun-filled dinner at Real Sports before they go their separate ways, with about half of the group set to head-off to Washington, D.C. for the annual NHLPA/NHL Rookie Orientation Program.

Stay tuned to our social media channels for all the latest #NHLPARookieShowcase live coverage.