The Detroit Red Wings recently posted a video of DeKeyser meeting a young girl by the name of Lucy, a five-year-old who happens to be a big fan of the 26-year-old blueliner. 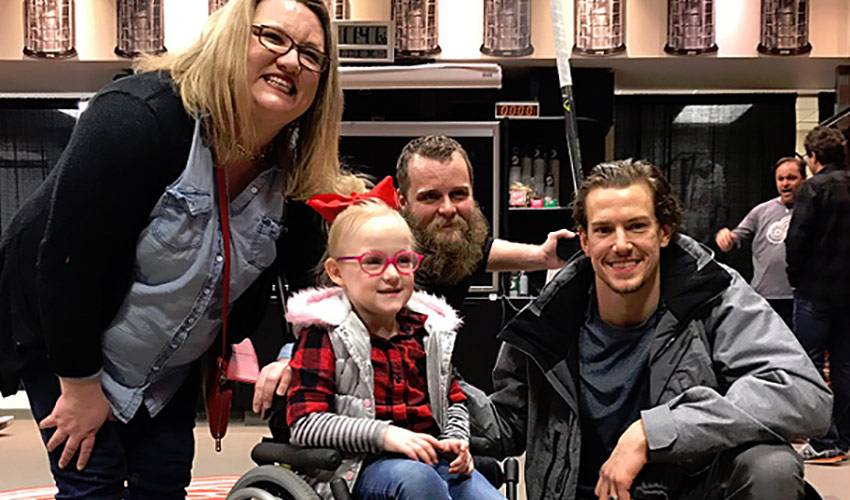 What’s it like meeting one of your favourite hockey players for the first time? Defenceman Danny DeKeyser has experienced that moment from both sides.

The Detroit Red Wings recently posted a video of DeKeyser meeting a young girl by the name of Lucy, a five-year-old who happens to be a big fan of the 26-year-old blueliner.

When you meet your favorite player. #LGRW @DeKeyser5 pic.twitter.com/N2BNIQv64a

It was a priceless moment between hockey player and hockey fan, something No. 65 is still smiling about.

“We had a game that day and I was told about a young girl and her family that wanted to meet me,” recalled DeKeyser. “When I came out to see her, she put a smile on my face right away. I really liked having the time to talk to her. She was just a sweet, young girl and it was nice to see her happy. I know that it made my day.”

Lucy is here today celebrating her 5th birthday with some of her favorite players. pic.twitter.com/XfxL6C5Aqe

Detroit native DeKeyser, who grew up a Red Wings supporter, felt exactly the same way when he had a chat with his childhood hockey idol not so long ago.

After garnering the attention of several NHL teams, the undrafted blueliner eventually inked a two-year contract with his hometown team on March 29, 2013.

Prior to making his decision, DeKeyser received an unexpected phone call from a Red Wings legend and Hall of Famer.

“I picked up the phone and said hello,” started DeKeyser. “The person on the other end of the line says, ‘Hi, it’s Nicklas Lidstrom.”

Cue the internal freak out moment.

“I always looked up to him for being such a great defenceman and great leader,” said DeKeyser. “And here I am getting a call from him. He told me how much he enjoyed playing there and things like that. I don’t really know what I said. It was pretty cool.”

It was even better when he finally got to meet Lidstrom in person. Despite being admittedly star struck, DeKeyser managed to keep his composure when he spoke to the former Wings captain, four-time Cup winner and seven-time James Norris Memorial Trophy recipient.

“He’s been around the rink and I’ve had the chance to talk to him a few times,” said DeKeyser. “He’s just what you’d expect – a great guy, who is really down to earth and always happy to talk to you.”

“There are so many good guys in the league,” he said. “Whether it’s a hospital visit, charity event or even just a couple of minutes talking to someone, I think players understand what it means to the fans.”

There’s no doubt DeKeyser does.

“Seeing a happy look on a kid’s face – that never gets old,” he offered. “It was really nice to have the chance to meet Lucy. I won’t ever forget it.”

It’s safe to say she won’t either.