May 2, 2017
By:
Chris Lomon
Other NewsPlayer Features
Jamie MacounMy Top 5 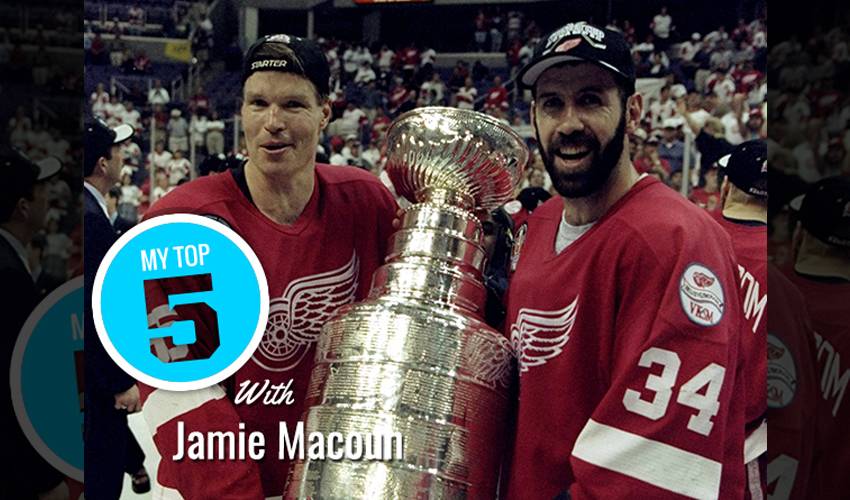 The physical defenceman called it a career after skating in 69 games with the Red Wings in 1998-99.

Macoun offers up his top playoff leadership advice in this edition of My Top 5.

“Wendel Clark was relatively quiet, but he let his actions speak for him. Whether it was scoring a big goal, throwing a big hit or dropping the gloves, he just brought consistency every game. He might score three or four goals, but just like any great leader, he would give the team that above average play, make very few mistakes, and even if things were tough, he was able to rise up to that level on a consistent basis. You see the great leaders, even today, that can take the game to the next level in those big games. I played with Steve Yzerman, Lanny McDonald, Doug Gilmour, Wendel and Mats Sundin – they all had that ability to go out and change the face of a game.”

“I think it’s keeping everybody level. When you have such an array of players and personalities – some guys might be brand new to the league, some might be relatively new to the playoffs – people tend to go in peaks and valleys. The teams that tend to win 16 games and win the Cup, their peaks and valleys seem to be a lot shallower. Their whole level of play is higher and the mistakes are fewer. Off ice, when guys are getting all revved up and burning energy unnecessarily, the good leaders are the ones that walk into that room and say things like, ‘How’s your dog? ‘How’s your new car?’ ‘Your parents are good? They’ll be at the game tonight, right?’ It keeps the excitement in check and keeps things loose, but level.”

“I went to the finals three times and we were fortunate to win it twice. When we were playing in Montreal and had a chance to win the Cup on their home ice, just before the third period, we knew we had a really good opportunity to win it. In that dressing room, it wasn’t quiet, but it was calm. The leaders were walking around the room, looking everyone in the eye and saying, ‘Let’s keep this going.’ It was just the basics of hockey. Everyone knew their role and everyone knew their job.”

“That’s maybe their most important part as a leader. Everybody can talk after a win. When you have a loss – maybe you were winning 4-2 and lose 5-4 – that’s a tough situation. You need your leaders to get everything back on track. When people are looking at you, you just have to be calm and cool. ‘We had a chance, we let it go, but time to move on.’ If you lose 1-0 or 10-0, it doesn’t matter. It’s just one game. It’s about taking one game at a time.”

5. Go with what you know in OT

“I don’t think it’s one thing. If you have a team that relies on your leader to rev them up, then that’s what they have to do. Some teams – like when I was playing with Detroit – have a lot of talent. The idea was, ‘We’ve got the talent here. Let’s just go out and play our game. Let them beat us, let’s not beat ourselves.’ That’s another saying you hear when it comes to the playoffs. Don’t do something out of the ordinary that’s going to cause a disruption in the way you play. Go out there and play the way you have the whole season.”