Another NHLPA Rookie Showcase came and went Monday as 26 of the game's top rookies and prospects descended on Toronto to take part in the ninth annual event at Mattamy Athletic Centre. 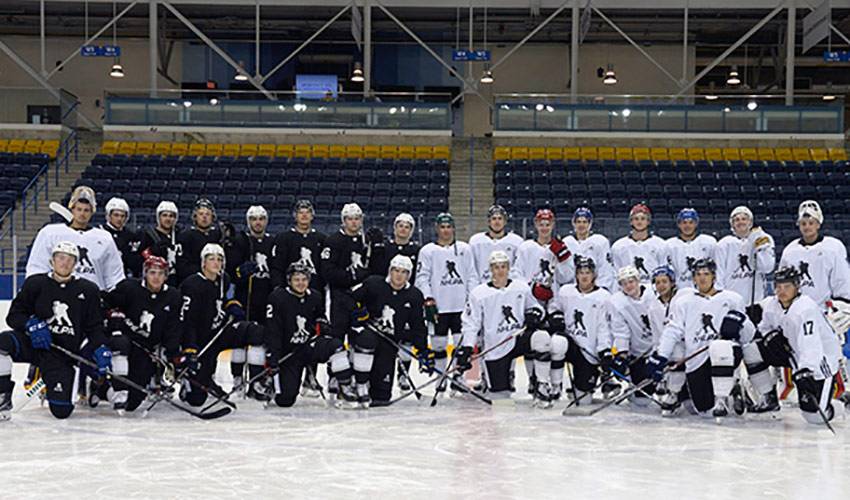 Another NHLPA Rookie Showcase came and went Monday as 26 of the game's top rookies and prospects descended on Toronto to take part in the ninth annual event at Mattamy Athletic Centre.

Over the course of the two-day event, NHLPA partners, including Upper Deck – the official trading card licensee of the NHLPA and NHL – had the chance to gather the photography, autographs, and video they will use in the creation of upcoming memorabilia and digital content.

For many of the players in attendance, the event marks the first time they will be photographed donning their official team jerseys. However, like every year, the class of 2017 was unique. The talented group up-and-comers were a blend of those who may find themselves back in junior this upcoming NHL season, while those like Charlie McAvoy, Brock Boeser, and Clayton Keller have already made their NHL debuts.

In the theme of debuts, following the introduction of the Vegas Golden Knights as the NHL's 31st team, Cody Glass made history this year as the club's first representative to attend the event.

Over the course of the day, players suited up in their NHL team uniforms and were photographed for both still and action shots that will be used on some of their very first trading cards. Those cards will go to print in Upper Deck hockey card sets that follow the rookies playing in their first NHL games. Also Monday, EA scanned each player’s likeness for use in upcoming video games.

The day at Mattamy ended with a friendly scrimmage in which the rookies were split into two teams, donning their sweet new Adidas-branded NHLPA uniforms.

In true hockey player fashion, the group found ways to indulge in a little off-ice competition in between stations with an NHL locker room staple, too.

The event concluded with the players heading to Toronto's Entertainment District for a farewell dinner before splitting off to take their next respective steps towards their NHL ambitions.

For a full look at some of the moments captured at the 2017 NHLPA Rookie Showcase, check out #NHLPARookieShowcase across your social feeds.