The community of 1,000 near Pittsburgh celebrated in style as the top hockey community in the United States. 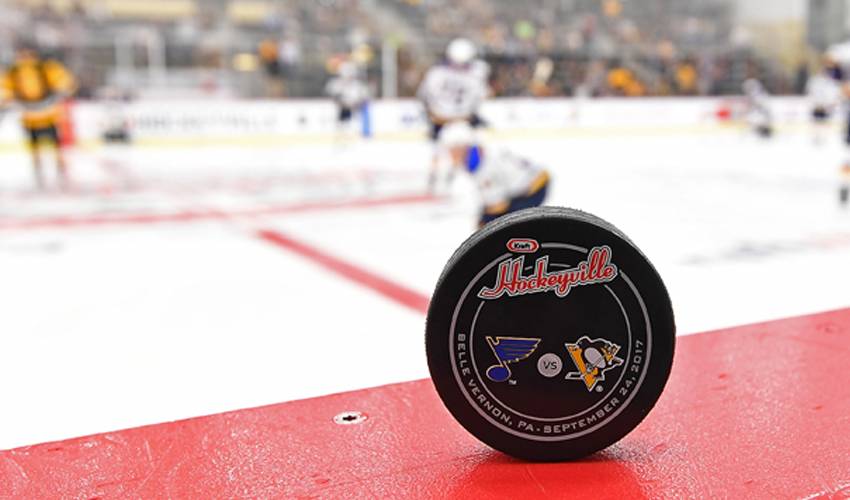 Kraft Hockeyville USA was once again a rousing success as Belle Vernon, Pa. was the ‘belle’ of the ball, showcasing its love of hockey and community spirit over the weekend celebrations.

Located on the banks of Monogahela River with a population of just over 1,000 inhabitants, Belle Vernon and Rostraver Ice Garden were the focal point of this celebration of hockey and community that culminated in a thrilling preseason game between the Pittsburgh Penguins and St. Louis Blues.

As the winning community, Belle Vernon receives $150,000 in arena upgrades for the Rostraver Ice Garden, enhancements that will help ensure that hockey remains a huge part of the fabric of this community for future generations.

After a couple of teaser community events Thursday and Friday, weekend's main events kicked off Saturday morning with a parade through the streets of Belle Vernon.

The attention then turned to the ice at the Rostraver Ice Garden where two local youth teams faced-off, cheered on by their friends, family and neighbours. Adding to the atmosphere and giving the game a true NHL feel was the Penguins ice crew, public address announcer and even IceBurgh – the Pens official mascot.

Belle Vernon, PA is Kraft @HockeyvilleUSA! That means it's time for a parade down Broad Street and youth hockey at the Ice Garden. pic.twitter.com/5wBtxr6JBa

Sunday started bright and early for the fans in Belle Vernon, as they packed the parking lot and stands at the Rostraver Ice Garden in anticipation of the Penguins arrival for practice at 10am.

The fans are amped here in Belle Vernon, PA with the @penguins just minutes from arrival here for @HockeyvilleUSA! pic.twitter.com/bazwvENvuq

Following the Penguins practice in front of a packed house, the NHLPA Goals & Dreams Fund (the players longstanding program supporting grassroots hockey all over the world) made a donation of $10,000 worth of hockey equipment to the Mon Ice Project, which is a local Belle Vernon program that helps children with exposure to the game of hockey.

Penguins defenceman Matt Hunwick, alongside former NHL player and current NHLPA Divisional Rep Joe Reekie, represented all NHLPA members in making the donation and interacting with some of the kids from the program.

NHLPA Goals & Dreams is proud to donate $10K of equipment to Mon Ice Project as part of @HockeyvilleUSA in Belle Vernon, PA. pic.twitter.com/JlJbkYTDVj

With the weekend festivities a success, there was one last special experience left for the people of Belle Vernon – the Sunday night preseason game between the Penguins and Blues.

Held in Cranberry Township at the UPMC Lemieux Sports Complex, the two teams dazzled a crowd of 1250 fans, the bulk of which were shuttled in from Belle Vernon to complete their Kraft Hockeyville USA experience.

Ultimately, the Blues would spoil the party for anyone with a local allegiance by claiming a 4-1 win, but even a Penguins loss couldn’t dampen the overall spirit of the weekend.

Kraft Hockeyville USA 2017 was once again a complete success and something the community of Belle Vernon will never forget.