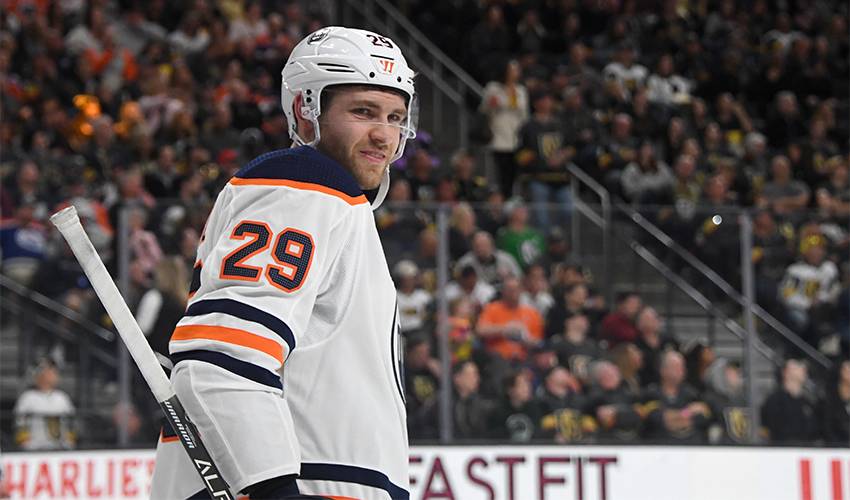 What are two of Tyler Ennis’ biggest reasons for enjoying practice with the Edmonton Oilers?

Hint: think a couple of outstanding players – one of whom has got his vote, literally.

Leon Draisaitl, along with Artemi Panarin and Nathan MacKinnon, were named the three finalists for the 2020 Ted Lindsay Award (TLA) that goes “to the most outstanding player in the NHL,” as voted by fellow members of the NHLPA.

As a relative newcomer, Ennis has played a grand total of 12 games – nine regular season, three postseason – with the club, but the 30-year-old quickly developed a deep appreciation for the talents of 2020 TLA finalist Leon Draisaitl, and two-time TLA recipient Connor McDavid.

“I think it’s good for the Oilers to have both Connor and Leon for a lot of reasons,” said the 30-year-old, who was dealt to the Oilers by the Ottawa Senators February 24, 2020. “For practice purposes, you see the best players in the world every single day, and you see, up-close, what they can do. The things that they can do are special, and you’re getting better just being around them every day. It’s pretty special to see that.”

The 2019-20 regular season, Draisaitl played in all 71 of Edmonton’s matchups and helped lead the Oilers to the fifth-best points percentage in the Western Conference.

He topped all scorers with 110 points en route to becoming the first German-born player to win the Art Ross Trophy. He also finished second in both even-strength points (66) and power-play goals (16), and he placed fourth in goals (43) on the season.

As for the most notable part of Draisaitl’s game, Ennis mulled the question over before opting for the centre’s mental approach.

But he didn’t stop there.

“I think it’s his brain, the way he makes plays,” praised Ennis. “He’s so good at everything and he’s so talented. But he really thinks the game at a high level. He’s fun to play with. He’s really creative, he has exceptional hands, and obviously, he’s one of the best goal scorers in the game. But he just thinks the game so well. He makes so many good little plays. You always want the puck on his stick because he can make so many things happen. He’s a pleasure to play with.”

Prior to his NHL career, Draisaitl was a Western Hockey League (WHL) standout. He skated with Prince Albert for two seasons before the Oilers netted him with the No. 3 pick of the 2014 NHL Draft. He played 37 games with Edmonton as a rookie in 2014-15 before he was assigned to Kelowna of the WHL, who had traded for his rights.

Draisaitl was a driving force with Kelowna, helping them to the 2015 WHL championship, scoring 28 points in 19 games and being named playoff MVP. He then helped Kelowna reach the 2015 Memorial Cup championship game and was selected tournament MVP.

In 2016-17, he slotted in second on Edmonton with 77 points (29 goals, 48 assists) to help the Oilers make it to the Stanley Cup Playoffs for the first time since 2006. Draisaitl paced the Oilers in postseason scoring with 16 points (six goals, 10 assists) in 13 games.

Now, the two-time NHL All-Star will look to become the first German recipient of the TLA, and make it three times an Oilers player has won the honour in the past four seasons.

McDavid won consecutive Ted Lindsay Awards in 2017 and 2018. Nikita Kucherov of the Tampa Bay Lightning was the 2019 recipient.

“Leon, he’s definitely got my vote for the Ted Lindsay this year,” said Ennis.

Other players across the league are no doubt saying the same thing.