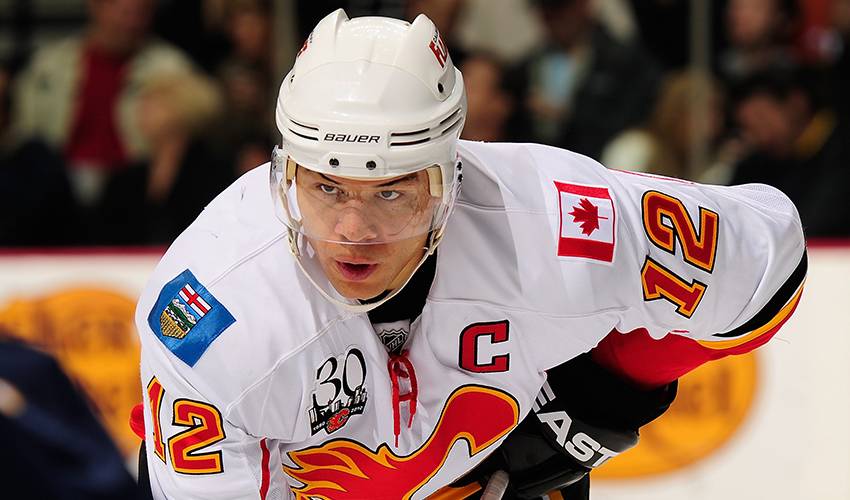 Today, the player affectionately known as “Iggy”, officially hung up his skates after an illustrious NHL career that spanned 20 years, during a press conference at Scotiabank Saddledome.

It’s no small feat to enjoy such longevity in a career, and it’s even more rare to remain as adept as Iginla did up throughout his career.

In his final game of the season, Jarome Iginla notched his 1,300th NHL point. Congrats! pic.twitter.com/WI3McqsVxy

His dominance on the ice, and the infectious smile off of it when dealing with fans, reverberated through generations of NHL players to come.

Congrats on an unbelievable career to one of my favorite players to watch growing up! Thank you for paving the way and setting the standard in Calgary! #ThankYouIggy pic.twitter.com/Aj0fzujZ5y

“I had a chance to meet Jarome when I was a kid,” recalled Josh Morrissey in an interview with NHLPA.com. “We had a few connections and we were lucky enough to go to some Flames practices. I remember the one time he came out after the skate. I was probably 11 or 12 and my brother is a couple of years younger than me. And there we were in our Flames jerseys.”

“I’m sure Jarome had a lot of other better things to do than stop and speak with us, but he came over and talked to us for a couple of minutes. He signed hats, jerseys – everything we had to be signed.”

His time in Calgary was marked with dazzling skill and the accolades to back it up. Iginla won the first Maurice “Rocket” Richard Trophy of his career in 2001-02 by leading the league with a career-high 52 goals, while his 96 points that season also led the league in scoring for him to capture the Art Ross Trophy. Iginla's play that season also culminated in earning the Ted Lindsay Award (formerly known as the Lester B. Pearson Award) for being voted the season’s most outstanding player by his peers. He was just three first-place votes shy of winning the Hart Trophy as the league’s MVP after tying in total votes with eventual winner, Jose Theodore.

It was just the beginning for Iginla.

On and off the ice, Iggy was a true leader that has so much love and respect for the game. I’m so lucky to have had the chance to play with him, and get to know him. Congrats to Iggy and his family on the journey through his incredible hall of fame career! #ThankYouIggy pic.twitter.com/sz8jLiOOcm

Iggy was such a great teammate and friend. He taught me everything I know about leadership on the ice but more importantly off the ice. A great father and husband and always treated everyone with the utmost respect. Congrats Iggy. What an incredible career. #ThankYouIggy

In 2003-04, Iginla led Calgary to Game 7 of the Stanley Cup Final in his first year of captaincy after being named the 18th captain in franchise history. He posted 22 points (13-9-22) over 26 postseason games while leading all playoff scorers. “Iggy” also closed out that same season with his second Maurice "Rocket" Richard trophy as the league's leading goal scorer, along with the 2003-04 NHL Foundation Player Award and King Clancy Memorial Award.

There is no doubt that wearing the ‘C’ for Calgary was an honour that Iginla took seriously. That it came from long-time friend, teammate, and predecessor as captain made it mean even more. Iginla opens up about being named captain and more in this throwback to Be A Player, The Hockey Show, originally aired January 19, 2004.

We’ve gathered some of Iginla’s biggest accomplishments and best smiles in the gallery below.