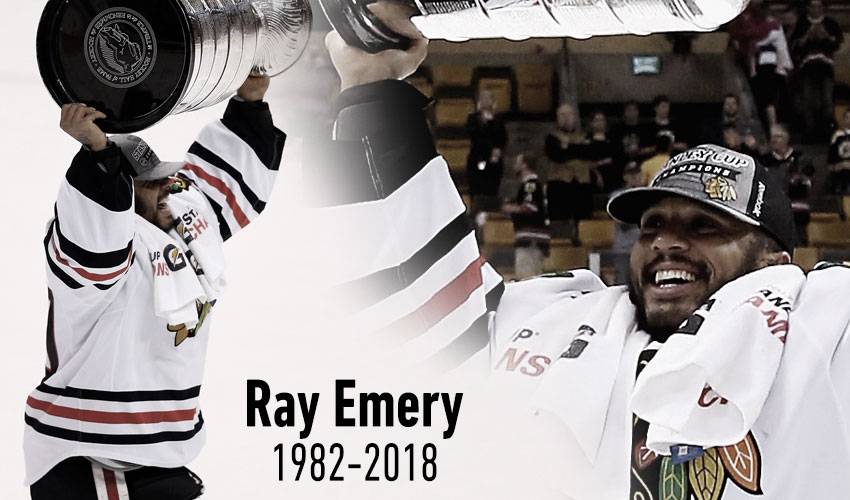 In an interview with the Canadian Press, former NHL player and opponent, Martin Biron, described Emery's impact on those he played with and against for over a decade, "He was a respected teammate and a respected opponent."

From former teammates and opponents, to those who never met him, the rest of the hockey community took to social media to express similar sentiments of a fierce competitor and a larger-than-life personality.

“All the statistics in the world can’t measure the warmth of a smile...”
Rest In Peace my friend, Ray Emery#Razor @NHL @NHLFlyers @FlyersAlumni @NHLAlumni pic.twitter.com/I6SX5cKq8c

Lost my golfing buddy and best friend today. Uncle Ray Ray touched a lot of hearts and people. Love and miss ya https://t.co/BekxgI5Dgm

The Chicago Blackhawks organization was deeply saddened to hear of Ray Emery’s passing. We extend our heartfelt condolences to his family and friends. The Blackhawks will fondly remember Ray as a fierce competitor, a good teammate and a Stanley Cup champion. pic.twitter.com/Q2gm0gG6sZ

Remembering Ray Emery's day with the #StanleyCup in 2013 with @NHLBlackhawks He visited Cayuga, Hamilton Burlington and Toronto to say thanks to everyone. Quite a day, quite a guy. @NHL @HockeyHallFame pic.twitter.com/OctK7LKJmQ

Life is fragile-I have no personal relation to Ray Emery but I have a sense of his vibrance and spirit through video and picture that’s come to light since this morning.I hope he and his family and friends find peace. Be good to urself and others. Love each day.

Horrible to hear about Ray Emery. He was an incredible teammate. #Razor

Horrible to hear about the tragic passing of Ray Emery. He was an incredible NHL goalie that accomplished so much in the game, a lot of which went under the radar. He was also one of my favorite @TorontoMarlies teammates in his brief time with us. Rest In Peace to a legend #Razor

“We are all deeply saddened by the loss of Ray Emery. When he joined us in 2011, Ray made an immediate impact on our team with his inspiring comeback from a debilitating injury... pic.twitter.com/oCmC8IOjMx

So saddened of the tragic news of Ray Emery’s passing. We played together for only a short time but he was a great teammate and competitor. My thoughts and prayers go out to his family and friends. May he Rest In Peace. 🙏

RIP Ray.
Honored to have had the chance to meet him yesterday at a charity event! A very tough competitor. pic.twitter.com/kYqTVAcvpe

The KHL sends condolences to family and friends of the former Atlant Moscow region goalie Ray Emery, who passed away in Hamilton, Ontario, on Sunday. pic.twitter.com/gHysoioKOf