A decade after an infamous line brawl that included both goaltenders dropping the gloves at centre ice, Martin Biron gave Ray Emery a chance to take one final blow. 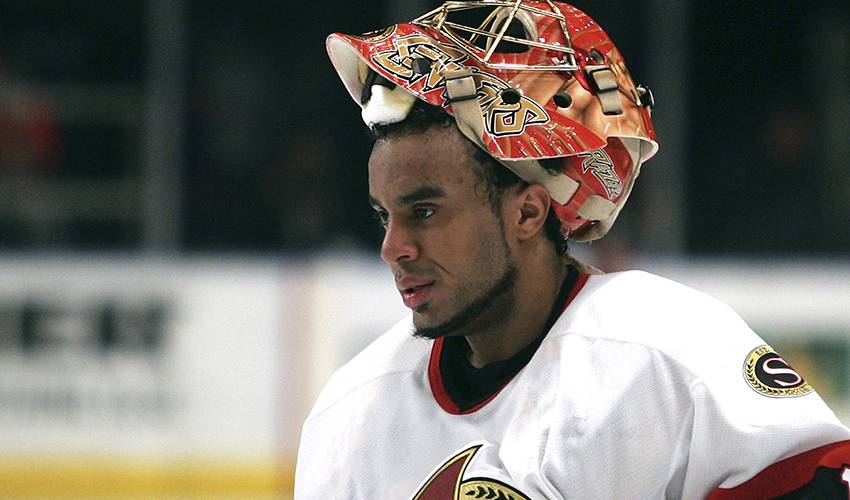 TORONTO — A decade after an infamous line brawl that included both goaltenders dropping the gloves at centre ice, Martin Biron gave Ray Emery a chance to take one final blow.

A Buffalo radio station held its annual celebrity roast in February 2017, 10 years after Emery got the better of Biron in a line brawl during the midst of a heated Ottawa Senators-Buffalo Sabres rivalry. Biron even sent Emery a text encouraging him to attend, saying the city of Buffalo would love it, but the retired goalie wouldn't budge.

"We reached out to Ray to come to Buffalo and take his shots off the ice and Ray was uncomfortable with that," said Biron. "He was like, 'Oh no I don't want people to hate me, it was just a hockey game. I don't want to speak badly of Buffalo or you.'

"He didn't do it because he didn't want to be perceived as a big-time villain that had his run-ins with off-ice issues," added Biron. "That's not what he wanted to be. It's not who he was and I felt like that was indicative of what type of person he was and I totally respect that."

Emery, who helped the Senators reach the final in 2007 by eliminating Biron's Sabres in the third round of the playoffs and also won the Stanley Cup with the Chicago Blackhawks in 2013, drowned in his hometown of Hamilton on Sunday. He was 35.

Hamilton Police confirmed the cause of death as drowning Monday after conducting a post-mortem.

Biron, who retired in 2014, was at a charity hockey game in Buffalo when he heard the news.

"I was with a lot of other former players that have crossed paths with Ray and everybody was thinking the same thing, extremely sad," said Biron.

Ottawa and Buffalo were two of the top teams in the NHL in 2007 and had a feud that boiled over during a regular-season game, leading to one of the more memorable moments of Biron's career.

It started when Ottawa's Chris Neil hit Chris Drury with a blindside check that cut open the forehead of the Sabres forward. On the next shift, Buffalo coach Lindy Ruff, who had last change as the home team, sent out enforcers Andrew Peters and Adam Mair along with rookie and soon-to-be known agitator Patrick Kaleta.

Ottawa's coach, the late Bryan Murray, had the scoring line of Jason Spezza, Dany Heatley and Mike Comrie on the ice, so when play resumed and the gloves came off, Emery prepared to get involved. He met Biron for what turned into a one-sided tilt in Emery's favour. Then he took on Peters, smiling and laughing during the entire spectacle while holding his own against the Sabres forward.

"I knew fisticuffs were gonna happen, so as soon as the puck dropped I just started to skate and Ray skated to meet me and when he pulled his mask off he had that smile on his face like I was chopped liver," said the 40-year-old Biron. "He was gonna beat me up with one hand behind his back and that's basically what happened.

"For us in Buffalo, one of the most memorable games in the franchise's history, or at least this generation of Sabres fans, was the brawl. It was a crazy game."

The rivalry eventually faded out and both goalies moved on to new teams soon after. Emery played a year in Russia's KHL before spending time with Philadelphia, Anaheim and Chicago, with his final stop in Germany for part of the 2015-16 season.

Many members in the hockey committee expressed their condolences on social media when Emery's death was confirmed. Biron was amongst the group.