vStill stung by the Blues missing the playoffs for the first time in six seasons, general manager Doug Armstrong capped a major roster overhaul on the first day of the NHL's free-agency period by acquiring centre Ryan O'Reilly in a multiplayer trade with the Buffalo Sabres. 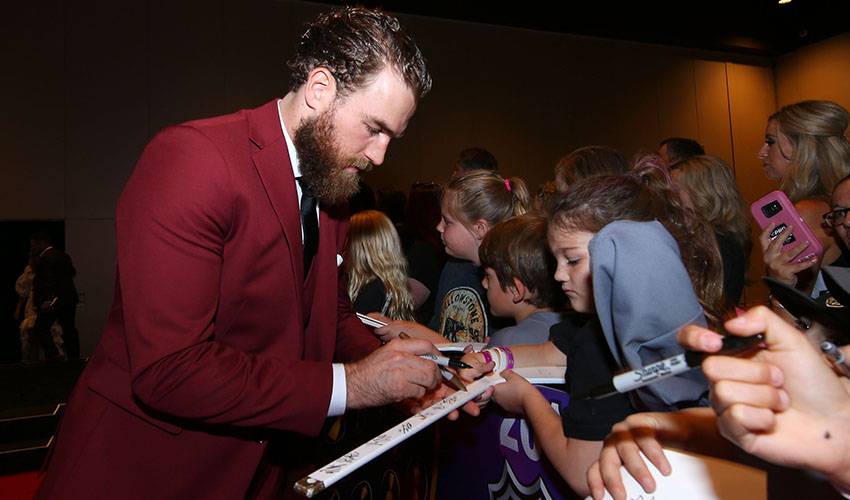 BUFFALO, N.Y. — Still stung by the Blues missing the playoffs for the first time in six seasons, general manager Doug Armstrong capped a major roster overhaul on the first day of the NHL's free-agency period by acquiring Ryan O'Reilly in a multiplayer trade with the Buffalo Sabres.

Aside from landing a nine-year veteran in O'Reilly on Sunday, St. Louis committed $31 million in salary to sign forwards David Perron and Tyler Bozak to multiyear contracts.

"Once you miss the playoffs, change has to happen," Armstrong said. "We're a non-playoff team for the first time in a number of years and it doesn't sit well with the St. Louis Blues organization, and certainly the fan base."

Making drastic changes was also the theme in Buffalo, where general manager Jason Botterill continued shuffling the under-performing roster of a team that finished last in the standings for the third time in five years.

"We had to change the dynamic," Botterill said. "The bottom line was there's a lot of great people in that locker room, but when you finish 31st, you have to look to make changes."

The Sabres added experience to a young roster by acquiring veterans forwards Vladimir Sobotka and Patrik Berglund. They also acquired forward Tage Thompson, a 2016 first-round draft pick, who had three goals and six assists in 41 games as an NHL rookie this season last year. Buffalo rounded out its haul by adding a conditional first-round draft pick next year and a second-rounder in 2021.

The Blues also agreed to pay O'Reilly the $7.5 million contract bonus he was due by the end of the day. Botterill said the price for O'Reilly would have gone up once the Sabres were put in a position to pay the bonus.

The trade continues a busy stretch in Botterill's rebuilding plans.

Aside from selecting 18-year-old Swedish Rasmus Dahlin with the No. 1 pick in the draft last month, he also acquired play-making forward Conor Sheary in a trade with Pittsburgh last week. The Sabres addressed their goaltending needs by signing former Blues backup Carter Hutton to a three-year, $8.25 million deal Sunday.

Hutton will share the starting duties with Linus Ullmark, who is pegged to make the jump to Buffalo after three seasons in the minors.

O'Reilly was expendable because he was one of the few assets the Sabres could trade. And he also caused a stir during an end-of-season availability by suggesting there were times he had lost the passion for hockey and that a losing culture had crept into the locker room.

Armstrong is confident a change of scenery will help O'Reilly.

"I've certainly been guilty of saying things I was thinking and wishing I didn't say them. He probably would add that to the list of things he wishes he could've kept internal," said Armstrong, who is familiar with O'Reilly during the time they've spent together as part of Canada's national team at international tournaments.

O'Reilly completed his third season in Buffalo since being acquired in a trade with Colorado, after which the Sabres signed him to a seven-year, $52.5 million contract. He's one of the league's most dependable two-way forwards, and set the NHL record by winning 1,273 faceoffs last year.

Perron returns to St. Louis for the third time in his NHL career after signing for $16 million over four years. He spent last season in Las Vegas, where he set career highs with 50 assists and 66 points. Bozak, who signed a three-year, $15 million deal with St. Louis, spent his first nine seasons in Toronto, where he scored 136 goals and 365 points in 594 games.

"You bring in Ryan O'Reilly, and you bring in Perron and Bozak, experience players, I think it just makes you better," Armstrong said.

Notes: Buffalo signed goalie Scott Wedgewood, who is expected to take over the starting duties in the minors. ... Forward Scott Wilson returned to Buffalo by signing a two-year, $2.1 million contract. ... The Sabres also signed Brandon Hickey to a two-year entry-level contract. Hickey completed his senior season at Boston University, and was acquired by Buffalo in trade with Arizona last month.