Barry Trotz has resigned as coach of the Washington Capitals after leading them to the Stanley Cup. 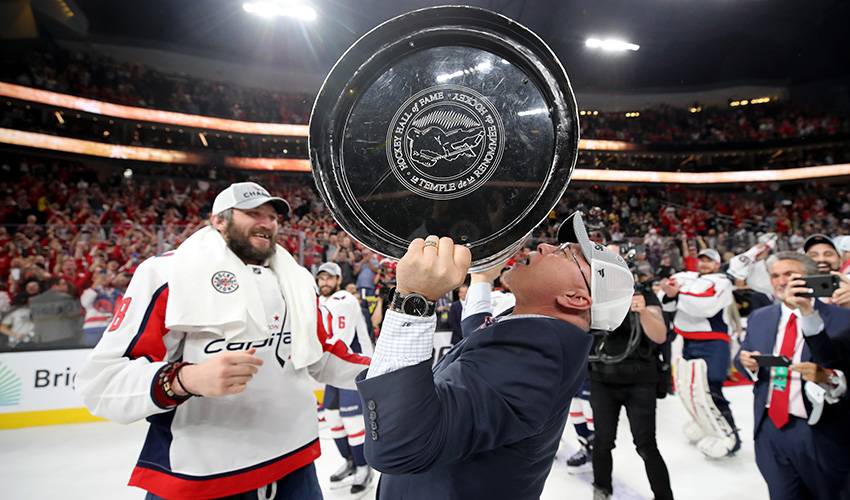 Less than two weeks after lifting the Stanley Cup, Barry Trotz is a free agent and the Washington Capitals are looking for a new coach.

Trotz stepped down as Capitals coach on Monday after a contract dispute over salary and term that leaves the newly minted Stanley Cup champions without a coach with the draft and free agency fast approaching. General manager Brian MacLellan said the Capitals accepted Trotz's resignation after they were unable to agree on terms on a new contract.

Winning the Cup less than two weeks ago triggered a two-year extension for Trotz that would have given him a slight bump in salary to just over $2 million, a person with direct knowledge of the situation told The Associated Press on condition of anonymity because the team did not announce the extension.

"His representative wants to take advantage of Barry's experience and Stanley Cup win and was trying to negotiate a deal that compensates him as one of the better coaches in the league, top four or five coaches," MacLellan said at a news conference in Arlington, Virginia. "I think the five-year term is probably a sticking point. You have a coach that's been here four years, you do another five, that's nine years. There's not many coaches that have that lasting ability. It's a long time and it's a lot of money to be committing to a coach."

Toronto's Mike Babcock makes the most at $6.25 million on an eight-year deal after coaching Detroit for 10 seasons, Chicago's Joel Quenneville is next at $6 million entering his ninth full season with the Blackhawks and Montreal's Claude Julien brings in $5 million after coaching Boston for nine-plus seasons. All three have won the Cup like Trotz, including Quenneville three times.

If Trotz was paid among the top five, it would have put him in the $4 million-plus range annually — a price the Capitals have not been willing to pay for coaches.

"After careful consideration and consultation with my family, I am officially announcing my resignation," Trotz said. "When I came to Washington four years ago we had one goal in mind and that was to bring the Stanley Cup to the nation's capital. We had an incredible run this season culminating with our players and staff achieving our goal and sharing the excitement with our fans."

The 55-year-old Trotz went into the season with an uncertain future after ownership and MacLellan declined to talk about a contract extension last summer after back-to-back Presidents' Trophy-winning seasons that ended with second-round exits.

That didn't happen as a relaxed Trotz played a vital role in Washington's first title in franchise history. He survived a rough start to the season and other struggles before he and the team found a stride in the playoffs.

As part of the uneasy arrangement, associate coach Todd Reirden — who was not allowed to interview with other teams last summer — remained on staff and was considered the coach-in-waiting. Reirden is now the leading candidate to take over for the defending champions, though MacLellan wants to go through an interview process with the former Pittsburgh assistant first.

"Todd's a good candidate for it," MacLellan said. "We're going to start with Todd here, and we've been grooming him to be a head coach whether for us or for someone else. We'll see how the talk goes with him and then we'll make a decision based on that. If it goes well, then we'll pursue Todd, and if it doesn't, we'll open it up a little bit."

After the Capitals accepted his resignation, Trotz will be an intriguing figure on the coaching market.

Only the New York Islanders have a current coaching vacancy, though given Trotz's success in Nashville and Washington, other teams might consider making a move to hire him. Trotz has the fifth-most victories in NHL history and has guided a team to the playoffs in 11 of his 19 seasons. He is 762-568-60-134 overall with the Predators and Capitals, and he won 205 of his 328 regular-season games (63 ) since taking over as Washington's coach in 2014.

Trotz had his fingerprints all over this championship, pushing all the right buttons by putting goaltender Braden Holtby back in net early in the first round and making the correct lineup decisions throughout the playoffs. He was also a popular coach with his players, helping playoff hero Devante Smith-Pelly and others find their stride.

"He changed this team with family mentality," top-line winger Tom Wilson said last week. "He did a really good job of creating that team atmosphere. You look three or four years back, there was a lot of skill on this team, but there wasn't really that team mentality and you can never take that away from what that did for this locker room."

Despite his contract situation, Trotz appeared relaxed throughout the , even as Washington vanquished playoff nemesis Pittsburgh. After the Capitals trailed in all four series and came back to win the Stanley Cup, Trotz told fans at the victory parade last week: "We're going to do it again!"

Instead, Trotz is looking at the next stop in his career and the Capitals are looking for a new coach.