The 59-year-old ranks among the most successful coaches in NHL history and won the Stanley Cup with Washington in 2018. 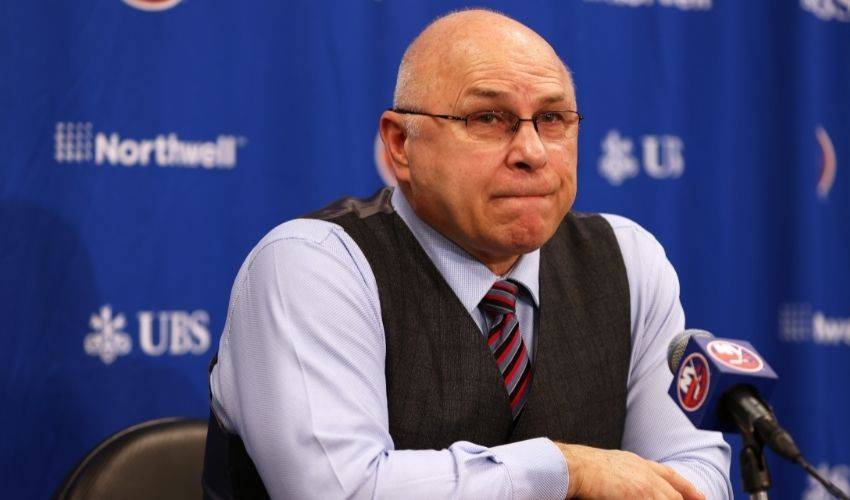 Barry Trotz was fired as coach of the New York Islanders on Monday, with general manager Lou Lamoriello saying he felt the team needed a new voice.

Trotz lost his job after four seasons with the Islanders and the first without a playoff appearance. The 59-year-old who ranks among the most successful coaches in NHL history and won the Stanley Cup with Washington in 2018 guided the Islanders to the Eastern Conference final each of the previous two years before losing to eventual champion Tampa Bay.

Lamoriello declined to explain why he thought “a new voice” was necessary.

“I’d rather not get into any of the reasons because that’s my job upon the information that I have and I experienced to make these type of decisions,” the 79-year-old longtime hockey executive said on a conference call. “Those are not questions that I will answer as far as what I thought. It’s obviously that I thought quite a bit to make this type of a decision.”

A series of events outside Trotz’s control contributed to the Islanders missing the playoffs this year. While their new arena was being finished, they opened the season on a 13-game road trip and were hit with a string of coronavirus-related absences and injuries that derailed their season.

Lamoriello said the choice to move on from Trotz was not made primarily about what happened this past season. He said, “This is certainly a business decision as far as hockey and winning.”

Trotz had one year remaining on his contract, which would have put him in the same situation he was in with the Capitals. They decided in the summer of 2018 not to rework Trotz’s contract despite the championship and granted him his release.

Days later, he joined the Islanders, who had just put Lamoriello in charge of a franchise that had not won a championship since its early 1980s dynasty. New York went 152-102-34 in the regular season and 28-21 in the playoffs under Trotz, the organization's most success in more than two decades.

Lamoriello said Trotz's contract status did not factor into his decision. A message sent to Trotz's agent seeking comment was not immediately returned.

Trotz could immediately become a candidate for vacancies in Philadelphia, Detroit and Winnipeg, plus others that open up because of his availability. Joining the Flyers would keep Trotz in the Metropolitan Division, while the Jets would represent a return home for the Manitoba native.

Trotz coached the Nashville Predators for their first 15 seasons, helping them reach the playoff seven times. His 914 regular-season wins rank third among coaches in NHL history.

The Islanders begin a coaching search with the franchise in the midst of contending window. Asked what he was looking for in a replacement, Lamoriello said he couldn't answer specifically and added there was no timeline.

Lamoriello said players were not consulted about the firing, which was known only by ownership before he delivered the news to Trotz on Monday morning.

“These type of decisions are made for going forward,” Lamoriello said. “With this group we have — and they are on notice right now — that the new voice is what’s necessary for us to have success, in my opinion. And unfortunately or fortunately, my opinion is what has to make these decisions.”

Jon Cooper, whose Lightning eliminated Trotz's Islanders the past two years and lost to his Capitals in 2018, called the firing unfortunate news.

“Whatever the reason was, in Lou’s mind there’s probably some reason for it,” said Cooper, who is the longest-tenured coach in the league after being hired in 2013. "On the other side of things, I think Barry is a top-flight coach in this league. I can't comment on what goes on in their organization other than they’ve run a first-class operation from the coach all the way up.

“But it is tough. It really makes you take a step back and think about the business at times when coaches can have so much success and then they pay the kind of price for it. But we know that going in, and so it’s just part of the business.”