The team confirmed the Hall of Famer and five-time Stanley Cup champion's passing. 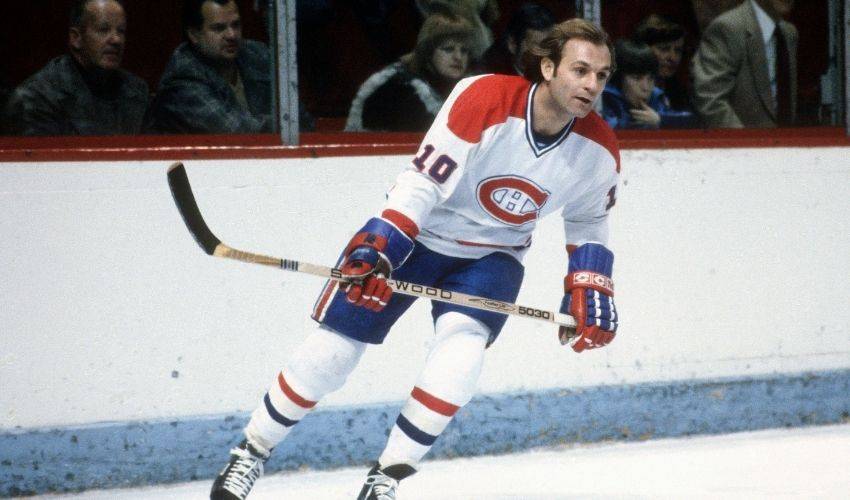 Guy Lafleur had been passed the torch as the Montreal Canadiens' next great Quebec-born player.

Maurice (Rocket) Richard was still revered in the province, while the just-retired Jean Beliveau cast a long, imposing shadow when the kid from Thurso was selected first overall at the 1971 NHL draft.

A dynamic forward with blonde locks that rippled in the wind as he glided up the ice before unleashing one of his bullet shots, Lafleur was expected to fill the void and become hockey's new French Canadian icon.

It just took him a while to get there.

"But he worked through the pressure and he became a player of his own."

And one who inspired a generation.

Lafleur, among the sport's all-time greats, has died at age 70 following a battle with lung cancer. The team confirmed the Hall of Famer and five-time Stanley Cup champion's passing.

Lafleur went under the knife again to remove both the upper lobe of his lung and lymph nodes a few months later, but learned in October 2020 the cancer was back.

"It's the chemotherapy that really hurts you badly," Lafleur said in an interview with The Canadian Press in November.

Yvan Cournoyer, who also played alongside Lafleur, had difficulty containing his emotions.

"Guy, he was a fighter," Cournoyer said with a tremble in his voice. "He wouldn't let go.

"He never gave up in his fight."

"A hero to so many of us," Trudeau said in Winnipeg. "I remember meeting him as a kid and being overwhelmed in a way that meeting presidents and queens didn't necessarily overwhelm me."

Lafleur's death came as the hockey world continues to mourn Mike Bossy after the New York Islanders legend and fellow Quebecer died last week at age 65 following his own battle with cancer.

"An honour to play with both," Wayne Gretzky posted to his social media channels. "My thoughts and prayers are with their families."

Lafleur, who registered a high-water mark of 64 points over his first three NHL seasons before averaging 128 over the next six, had a distinctive style that captivated fans across Quebec and around the league.

"You didn't need to see Guy Lafleur's name and number on his sweater when 'The Flower' had the puck," NHL commissioner Gary Bettman said in a statement.

The family recently thanked fans for their "the outpouring of love," adding Lafleur was being monitored closely by doctors and had occasional hospital checkups, but was at home.

Lafleur, who initially retired in 1985, was inducted into the Hockey Hall of Fame in 1988. But he made a comeback later that year — his No. 10 was retired by the Canadiens in 1985 — with the New York Rangers and played two more seasons with the Quebec Nordiques before hanging up his skates for good in 1991.

Bowman said his favourite Lafleur memory came in the 1979 semifinals when the winger tied the score late in regulation of Game 7 with a memorable blast off the rush after Don Cherry's Boston Bruins were infamously whistled for too many men on the ice.

"Jacques Lemaire dropped a pass to Lafleur and he put a 45-, 50-foot one-time shot right in the corner," said the 88-year-old Bowman, whose team would go onto a 5-4 overtime victory.

"Propelled us into the final and allowed Montreal to win the fourth Cup in row."

Chris Nilan, a future teammate and massive Bruins fan growing up, told a story Friday about running into Lafleur, Lemaire and Gilles Lupien earlier in the series outside the Boston Garden as they waited for a taxi.

Having been drafted by the Canadiens out of Northeastern University the previous year, Nilan informed the trio he'd soon be joining the team.

"They said, 'What round were you drafted?' And I said, '19th,'" Nilan, who drove the players to their hotel with a friend in his car, recalled with a chuckle.

"The three of them started laughing their asses off ... all I knew was I had a chance."

The following training camp, Nilan was placed on Lafleur's side during a scrimmage.

"He kept looking at me and staring at me before going, 'It's you! You're the kid from Boston. I remember!'" Nilan recounted.

Nilan would start the season in the minors, but got called up and found himself on an empty practice rink with Lafleur one quiet Monday morning.

"It was just Guy and me ... the guy I hated all these years," Nilan said. "He was passing me pucks, he was shooting, he was giving me some tips.

"I couldn't believe it ... last year I was at Northeastern and here I am in Montreal on the ice alone with undoubtedly one of the greatest players ever."

Lafleur holds the Canadiens' record for assists and points, tied Steve Shutt for the most goals in a campaign with 60, and scored at least 50 times in six straight seasons.

He won the Art Ross Trophy as the NHL's leading scorer on three occasions, the Hart Trophy as league MVP twice, and the Conn Smythe Trophy as playoff MVP once.

A three-time holder of the Ted Lindsay Award — known then as the Lester B. Pearson Award — as league MVP voted on by members of the NHL Players' Association, Lafleur was also part of the Canadian team that hoisted the 1976 Canada Cup.

"He could score goals and he could make plays," Bowman said. "There's a lot of great players that are, I wouldn't say one dimensional, but some of them are better scorers and some are better playmakers.

"He had the ability to do both."

Lafleur underwent his heart surgery in September 2019 after it was discovered four coronary arteries were fully blocked — and a fifth was almost 90-per-cent clogged — during a routine medical exam.

Once the cancer was discovered, he had one-third of his right lung removed by doctors.

A chain smoker up until those health scares, Lafleur had been partnering with Merck Canada as part of its "Be The MVP" campaign to raise awareness about early lung cancer detection.

"There's miracles," Lafleur said in his November interview with CP. "There's people that are surviving."

He hadn't been out in public much because of his cancer diagnosis and the COVID-19 pandemic, but received a thunderous ovation at the Bell Centre during Montreal's improbable run to last season's final.

Lafleur also had his number retired by the Quebec Major Junior Hockey League in October and was named to the Order of Hockey Canada last month.

"I've been mostly stuck in the house since 2019," Lafleur said back in the fall. "Mentally, it's tough. Hopefully I get through this and get out of it with a victory.

"It's the hope for everybody that has cancer."

He also looked back on his career wearing red, white and blue.

"Montreal is the best city in the world to play in, if you win," Lafleur said. "If you don't win, it's hell."

The Canadiens' beloved No. 10 did plenty of the former — and left a lasting legacy like the greats he followed.

"A true icon and hero in this province forever," Nilan said. "You look at Beliveau, Rocket before him.

"The esteem in which they're held by the passionate French Canadians ... it's incredible."

-With files from Alexis Belanger-Champagne.

This report from The Canadian Press was first published April 22, 2022.