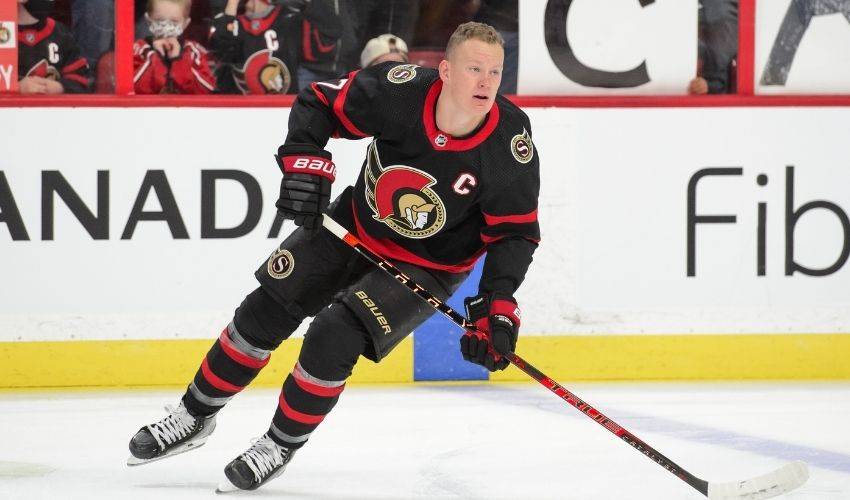 OTTAWA — Brady Tkachuk may have a new letter sewn on his jersey, but he doesn’t plan on changing anything else.

Tkachuk was named the new captain for the Ottawa Senators on Friday, making him the 10th in franchise history.

“It's an honour and I'm definitely excited for this opportunity,” said Tkachuk. “In saying that there's plenty of guys in that locker room who are tremendous leaders as well, and so it's just not going to be one person.

"It's still going to be that group leadership that we've had in the past and it's going to continue moving forward.”

At 22 years old, Tkachuk is the franchise’s youngest-ever captain. There will be pressure on him as the Senators work on becoming a playoff contender but Ottawa coach D.J. Smith believes Tkachuk is well equipped to handle whatever comes his way.

“I'm going to try and take some of the load as much as possible when it really gets going tough, I mean, that's my job as the coach is to take some of that off him,” said Smith. “But in saying that, he grew up in hockey his whole life, he’s probably a more mature 22-year-old when it comes to that.

"He's been at the arena, you know, since he's two-years-old, and he's lived the NHL and knows nothing but it, so I think that gives him a leg up when we're talking about you know, a young captain.”

Tkachuk will also have the benefit of turning to his father, Keith, for advice who served as captain of the Winnipeg Jets and Phoenix Coyotes during his impressive career.

After missing training camp due to a contract dispute, Tkachuk signed a seven-year, US$57.5-million contract hours before Ottawa's Oct. 14 home opener against the Toronto Maple Leafs.

Tkachuk has 129 points (62 goals, 67 assists) in 205 career games with the Senators. He has two goals and two assists in seven games so far this season.

He will make his debut as Senators captain when Ottawa hosts Tampa Bay on Saturday afternoon.

Tkachuk was actually told Thursday that he would be named captain, but didn’t want it to be a distraction before the team’s game against the Vegas Golden Knights.

In a stroke of good luck Tkachuk’s mother had just arrived in town Thursday and he planned to celebrate the announcement with dinner Friday night.

In addition to Tkachuk, Thomas Chabot, a full-time alternate captain, had been considered a contender for the captaincy and Tkachuk was quick to emphasize that he will rely on his teammate’s leadership.

“He's every much as great of a leader as anybody that I've ever met and he's going to be right there with me,” Tkachuk said. “It's going to be together like it always has been. He's been one of my best buddies and now we’re as tight as anybody. This isn't going to change anything.

“It’s going to be a great opportunity for us to you know, keep leaning on each other and keep progressing and that's what we've always been doing and I'm really excited to kind of do this with him and both of us take this team to the next level.”

Since being drafted fourth overall by Ottawa in 2018 Tkachuk has made a significant impact on the franchise with his gregarious personality and hard-nosed style of play.

“Brady’s the guy that puts it out there every night,” said left-winger Nick Paul. “He leads by example. He scores, hits, fights, does everything so he’s a great leader.”

Paul went on to talk about how Tkachuk goes out of his way to make people feel welcome and always has his teammates’ back.

After going three years without a captain management was pleased to finally make the announcement.

“Brady’s ingrained understanding of what it means to be a pro has made him the right choice for the team’s captaincy,” Senators general manager Pierre Dorion said in a statement. “He holds a unique skill set and places team success above all else.

"Admired by teammates and coaches, and respected by opponents, he’s certain to serve as a great ambassador for both our team and for the city of Ottawa.”

Tkachuk will be supported by Chabot and a rotating group of alternates comprised of Paul, Connor Brown, and Nikita Zaitsev.

Notes: Friday afternoon the Senators placed Austin Watson in the NHL’s COVID-19 protocol. Watson had just returned to the lineup earlier in the week after missing the first eight games of the season.

This report by The Canadian Press was first published Nov. 5, 2021.