With the deals finally signed, Hughes and Pettersson have finally rejoined the team in Vancouver. 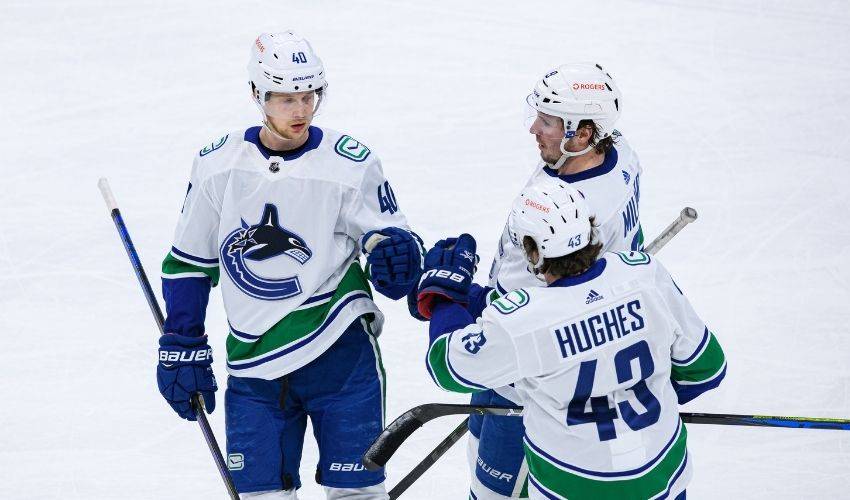 The star centre knew he should be with them but instead found himself in Michigan, skating alongside teammate Quinn Hughes as talks over new contracts for the duo continued.

With the deals finally signed, Hughes and Pettersson have finally rejoined the team in Vancouver.

“I just wanted to get back to the team. Both me and Quinn felt wrong being in Michigan while the team was having the training camp and in pre-season. So we just wanted to get the deal sorted as fast as possible," Pettersson said. "Maybe it took longer than expected, but both of us are really happy with our deals and just can’t wait to get started.”

The Canucks announced the contracts Sunday, more than a week after the team opened training camp in Abbotsford, B.C.

"Not easy to be at home the last week but I'm glad we're here now and we can put that behind us," Hughes said.

Pettersson quickly earned a reputation as a dynamic, high-scoring forward after entering the league in 2018 but a hyperextended wrist limited the 22-year-old to just 26 appearances and 21 points (10 goals, 11 assists) last season.

The Canucks picked the native of Sundsvall, Sweden, fifth overall in the 2017 NHL entry draft and he put up 66 points (28 goals, 38 assists) in his first season, winning the Calder Trophy, awarded annually to the league's rookie of the year.

Pettersson had a solid sophomore campaign in the COVID-19 interrupted 2020 season, tallying another 66 points (27 goals and 39 assists) before adding another seven goals and 11 assists in 17 playoff games.

Vancouver selected the Orlando-born blue liner seventh overall in the 2018 draft and he registered 53 points (eight goals, 45 assists) in his rookie year in 2019-20. He was runner-up for the Calder that season.

"They're two important guys in our group. They're still young players. I think they can still get better. So we're happy to get them signed and get them in camp," said Vancouver general manager Jim Benning.

Negotiations over the deals have been ongoing all summer, he added, but were complex and unique.

"It would have been nice to get them done before camp so these guys were here for the start of camp. That didn't happen. We continued to work at it, we’re happy we got it done now," Benning said.

"I think the landscape has changed a little bit with the (restricted free agent) players now coming out of their entry level deals and wanting more money, expecting more money. That’s just part of the business and where we’re at right now."

While their agents talked about term and money, the young stars set up camp at Hughes' off-season home in Michigan, skating with his father, Jim Hughes, former director of player development for the Toronto Maple Leafs. They were joined by Ottawa Senators winger Brady Tkachuk, a fellow restricted agent who's still without a deal.

"We're pretty normal guys. We’ve been surfing a little bit and working out and skating. Just hanging out, watching TV," Hughes said. "It was good. Stressful, because you’re seeing stuff online and you want to be (at training camp). But it was what it was and we're here now.”

The pair said the elder Hughes didn't go easy on them in on-ice sessions, and they both feel ready to jump into action with their teammates.

The Canucks have four pre-season games to go, including a battle with the Winnipeg Jets in Vancouver on Sunday.

Head coach Travis Green said he doesn't expect to see the pair in a game before Thursday when the Canucks visit the Oilers in Edmonton.

While Hughes and Pettersson have been working hard in Michigan, they've missed out on some crucial aspects of training camp, like getting hit, and still need to get up to speed, Benning said.

"They look like they're in great shape, they say they’re ready to go, they’re excited to be here," he said. "Hopefully they’ll be ready for the start of the season."

The Canucks are set to kick off the regular-season campaign against the Oilers in Edmonton on Oct. 12.

This report by The Canadian Press was first published Oct. 3, 2021.