The 6-foot-2, 195-pound forward has been a fixture on Carolina’s top line alongside Sebastian Aho and Teuvo Teravainen. 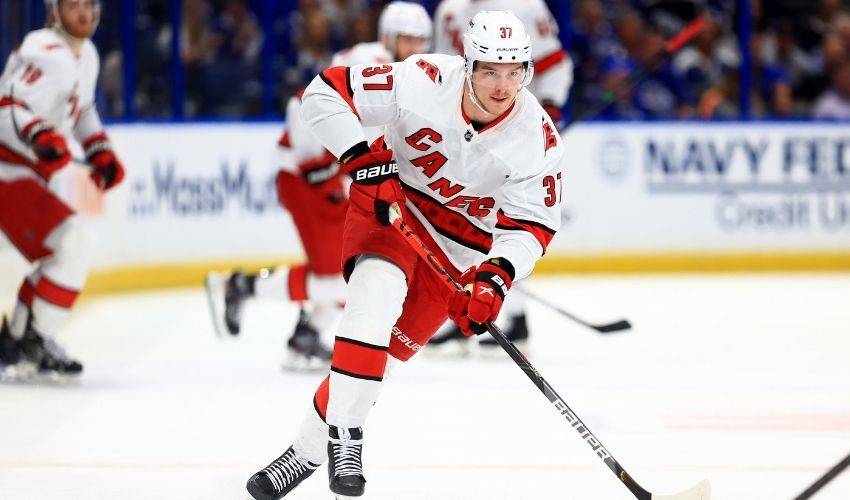 Andrei Svechnikov has played three NHL seasons and reached the playoffs all three times — the last under a coach who was named the NHL's best — while finding himself as a top-line performer.

That helps explain why the 21-year-old forward was eager to reach a long-term deal to stay with the Carolina Hurricanes.

The Hurricanes announced Thursday they had agreed to terms with the former No. 2 overall draft pick from 2018 on an eight-year contract, The deal is set to pay him an average annual value of $7.75 million while keeping him with the franchise through the 2028-29 season.

“It's actually an easy decision for me,” Svechnikov said Thursday. “Eight years to play in Carolina, and I want to be a Hurricane."

The 6-foot-2, 195-pound Svechnikov has been a fixture and physical presence on Carolina’s top line alongside Sebastian Aho and Teuvo Teravainen. He's played all three of his NHL seasons under Rod Brind'Amour, a former Hurricanes captain who won last season's Jack Adams Award as NHL coach of the year.

He was a restricted free agent and the team had long been in extension talks with him, even to the point that Waddell had floated the possibility of a shorter-term “bridge” deal to ensure getting something done if a long-term deal couldn’t be reached. But Waddell said Thursday the two sides eventually shelved talks until after the season, then resumed with the shared goal of reaching the long-term deal.

"Anytime you're dealing with a contract, the sooner you get it done, I think it's better for everybody," Waddell said, noting the team was scheduled to start preseason camp Sept. 22.

"I didn't want to have this drag into training camp and neither did Andrei, so we we worked pretty hard on it, especially the last week to really close it up and get this deal done.

Svechnikov has been a major piece of Carolina's revival after a nine-year playoff drought in 2019. the team went to the Eastern Conference finals that year in his rookie season, and has won at least one postseason series in each of the past two years.

Svechnikov had 15 goals and 27 assists in 55 regular-season games for the Hurricanes last year, which saw the Hurricanes win a division championship for the first time in 15 years. He also had two goals and six assists in 11 playoff games, with Carolina beating Nashville in the first round before losing to eventual Stanley Cup champion Tampa Bay.

The previous year, he posted the first postseason hat trick in franchise history against the New York Rangers in a Stanley Cup qualifier series in the Toronto bubble following the NHL’s restart amid the COVID-19 pandemic.

And he had shown flair with his lacrosse-style goals, when he scoops up the puck with his stick from behind the net and jams it into the net behind the goalie.

“Just watching Andrei in and around the rink every day, he's a player that puts his time in," Waddell said. "I've walked down there an hour, two hours after practice and he's back there shooting practice. You know he's all-in. ... He's shown a lot through his career.”