The Blackhawks first hinted of Fleury's decision by posting an image of a flower — Fleury’s nickname — on Twitter earlier. 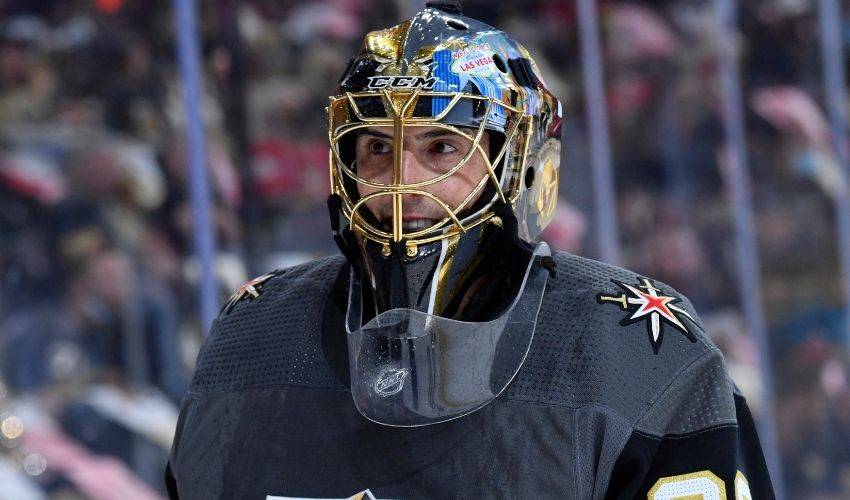 Goalie Marc-Andre Fleury has committed to playing for the Chicago Blackhawks this season, setting aside his reservations about leaving Vegas.

“Hey Chicago. It's Marc, just want to let you know I'm in. Let's get to work,” Fleury said, standing in front of a small jet, in a video posted by the Blackhawks on their Twitter account Sunday. The Blackhawks also announced a video news conference featuring Fleury and team president Stan Bowman on Monday.

This season's Vezina Trophy winner had spent a few days contemplating his future after being traded to Chicago on Tuesday. He had been with the Golden Knights since becoming their highest-profile selection in the 2017 expansion draft.

The Blackhawks first hinted of Fleury's decision by posting an image of a flower — Fleury’s nickname — on Twitter earlier Sunday.

The 36-year-old, who won three Stanley Cups during his first 13 NHL seasons in Pittsburgh, considered Las Vegas his home and place where he wanted to end his career, and had reservations about relocating his family. Fleury had also developed a bond with Golden Knights fans and team owner Bill Foley.

The Golden Knights traded Fleury to free up much-needed salary cap space, with the goalie counting $7 million against the cap in the final season of his contract. Vegas also has a starter in waiting in Robin Lehner, who split duties with Fleury last season and has four years remaining on his contract.

The Blackhawks have been rebuilding and acquiring Fleury puts them in win-now mode.

“The opportunity to acquire a Vezina-winning goaltender is rare and one you cannot pass up,” Bowman said last week. “Marc-Andre improves our goaltending, strengthens our team defense and will have a huge impact on the overall development of the Blackhawks. Having a goaltender like this on our team will put the talent we currently have on our roster in a better position to achieve sustained success.”

Fleury went 26-10-0 with a 1.98 goals-against average and .928 save percentage last season and was voted the Vezina winner by GMs. He started 16 of the Golden Knights’ 19 playoff games over Lehner, who finished the postseason as the starter after a gaffe by Fleury late in Game 3 of the semifinals against Montreal altered the series and led coach Peter DeBoer to switch back and forth. Vegas was eliminated in six games.