Chicago acquired the star defenseman from the Columbus Blue Jackets in a blockbuster trade just before the NHL draft began. 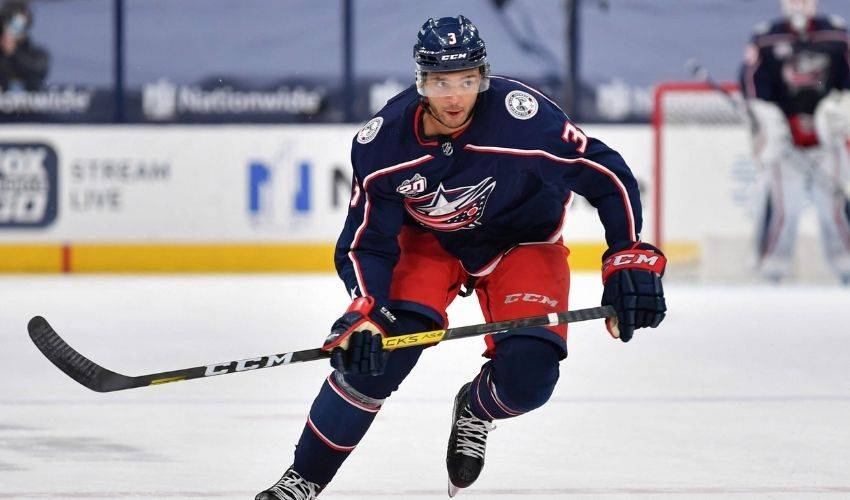 SECAUCUS, N.J. (AP) — Seth Jones is now with the Chicago Blackhawks and could become the organization's cornerstone on the blue line.

“Thrilled to be able to add someone like Seth Jones to our team," general manager Stan Bowman said on a video call after the first round. “He’s an impact defenseman that we’ve been searching for for quite some time, and to finally be able to add him to our group here is a huge move for the whole group. I think it changes the complexion of our defense in particular but our team in general.”

And this isn't a one-year move. Jones agreed to terms on a $76 million, eight-year extension that carries a $9.5 million annual salary cap hit, according to a person with knowledge of the deal. The person spoke to The Associated Press on condition of anonymity because the extension cannot be signed until next week.

Bowman said the Blackhawks have been plotting their cap situation and stockpiling assets to make this kind of move. Chicago's rebuild just got a jumpstart.

“You’re always looking for opportunities to try to accelerate your team’s progression," Bowman said. "We certainly had to include a young player in Adam Boqvist and a draft pick, as well — a couple draft picks. But there are so few opportunities to add a player of this caliber that you have to take advantage of it when they come around.”

The Blackhawks acquired Seth's brother, Caleb, last week in a trade that sent Duncan Keith to Edmonton. Caleb Jones could be a part of Chicago's future, but Seth is expected to be the No. 1 defenseman for years to come.

Jones skated more than 25 minutes a game last season and recorded 28 points in 56 games. He has 286 points in 580 regular-season NHL games.

Bowman called Jones “one of the few players that can do everything.”

"He’s got all the attributes that you look for in the modern defenseman with his skating, his size, his defensive ability," he said. “He’s got the size and the skating as well as the ability to play those tough minutes against top players in every situation from the power play to the penalty kill. He’s the guy you want on the ice with a minute to go when you’re protecting a lead as well as when you’re down a goal. Those are tough to find.”

The trade was the fourth and biggest of the day, which also included Arizona pulling off a blockbuster by sending captain Oliver Ekman-Larsson and forward Conor Garland to Vancouver for the No. 9 selection, a 2022 second-round pick, 2023 seventh-rounder and three veteran forwards.

“He’s going to touch all aspects of our game and he’s at a good age,” Blues GM Doug Armstrong said of the 26-year-old Buchnevich, who is a restricted free agent. "As we continue to retool this roster, I think he’s a good piece for us.”

Earlier in the day, the Philadelphia Flyers traded the 14th pick and a 2023 second-rounder to the Buffalo Sabres for big defenseman Rasmus Ristolainen.

“He’s a player we’ve been looking at the last three years,” Flyers general manager Chuck Fletcher said of Ristolainen. "He can shoot the puck, he can skate, he’s big and strong.”

While the Flyers paid a hefty price for a sought-after player in Ristolainen who has one year left on his contract, the Canucks acquired a defenseman in Ekman-Larsson who's signed for six more years at a salary-cap hit of $8.25 million. Garland is a restricted free agent in need of a new deal, and Arizona had been shopping him and Ekman-Larsson for some time.

“(Ekman-Larsson) is a tremendous player and person, and we wish him and Conor the best of luck in the future,” Coyotes GM Bill Armstrong said. “We are very pleased to acquire the ninth overall draft choice in this year’s NHL draft along with Loui, Antoine and Jay."

Arizona is retaining a portion of Ekman-Larsson's salary and took on Antoine Roussel, Jay Beagle and Loui Eriksson — all set to be free agents after next season — to add another draft pick. The Coyotes forfeited their first-round pick this year, 11th overall, for testing players in violation of NHL combine policy.

After a handful of trades Thursday when the roster freeze was lifted, Philadelphia and Buffalo kicked off the movement Friday with the trade of Ristolainen, who said he “knew something might happen this offseason, this weekend.”

Not so much for Buchnevich, who was fourth in scoring for the Rangers and looked like a piece of their young core. But new president and general manager Chris Drury dealt Buchnevich to St. Louis to add a second Stanley Cup champion in a week after trading for gritty forward Barclay Goodrow, who won back-to-back with Tampa Bay.

On the signing front, the Boston Bruins locked up Taylor Hall with a $24 million, four-year contract. Hall will count $6 million against the salary cap through the 2024-25 season. Buffalo dealt Hall to Boston at the trade deadline and he fit in perfectly as a complementary forward on the second line.

Also, the Montreal Canadiens said goalie Carey Price had knee surgery and is expected to be out 10-12 weeks. The team expects Price, who went unselected by Seattle in the expansion draft more because of his contract than his uncertain injury status, to be ready for the start of the regular season in mid-October.