Miro Heiskanen has signed a $67.6 million, eight-year contract with the Dallas Stars, putting him among the highest-paid defensemen in the NHL. 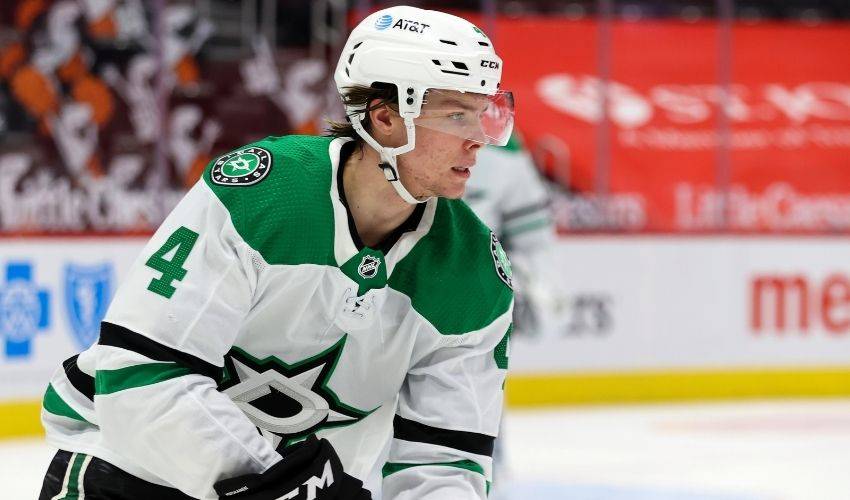 FRISCO, Texas (AP) — Miro Heiskanen signed a $67.6 million, eight-year contract with the Dallas Stars on Saturday, a monster deal that puts him among the highest-paid defensemen in the NHL.

The Stars also traded forward Jason Dickinson to Vancouver for a 2021 third-round pick before rosters had to be set for the Seattle expansion draft. The move was designed to keep the club from losing the 26-year-old to the Kraken for nothing.

Heiskanen will count $8.45 million against the salary cap through 2028-29. Only five defensemen currently count more against the cap than that next season. The deal came a day before Heiskanen's 22nd birthday.

The native of Finland had 27 points last season and ranked ninth in the league in ice time at just under 25 minutes a game. Heiskanen has 28 goals and 67 assists for 95 points in 205 regular-season games. He also has 30 points in 40 playoff games with Dallas, including a trip to the 2020 Stanley Cup Final in the bubble.

Heiskanen, the third pick in the 2017 draft, was fourth in Calder Trophy voting as rookie of the year his first season and 12th in Norris voting in 2019-20.

General manager Jim Nill said the Stars believe Heiskanen, who became a restricted free agent this summer, will be a Norris contender for years. The club also had to balance uncertainty over the salary cap because of pandemic-reduced revenues.

“Miro made it very clear he wants to be here long-term,” Nill said. “I think it's a fair number for both parties. It protects his upside and it protects us as we move forward with our business.”

Heiskanen's deal could set the bar for other restricted free agent defensemen like Colorado's Cale Makar and Vancouver's Quinn Hughes this year, and Boston's Charlie McAvoy next year.

“It feels great to get this done,” Heiskanen said. “Of course there is a lot of work to be done, and we’re very motivated to get back on the ice. It is very exciting to be a part of what Jim and his staff are building, and it’s important to reward them for the trust they’ve shown with this long-term commitment.”

“Like with anybody's career, there's going to be some years you get more points than others and vice versa," Nill said. “When we talk about his maturing as a player, he's going to figure that out even more. That's part of the evolution experience. We're not too worried about that.”

Dickinson was a first-round pick by the Stars in 2013 and played 221 regular-season games and 40 more in the playoffs over six seasons. He had 15 points (seven goals, eight assists) last season and led Dallas forwards with 49 blocked shots.

Like Heiskanen, Dickinson was a restricted free agent. Although he was more of a depth forward behind the likes of Tyler Seguin and Jamie Benn, Dickinson had emerged as a leader and was the team's player representative.

“In the end, we just had to make a decision,” Nill said. “Some of it comes down to contracts. A lot of different scenarios come into play and really it's nothing against Jason Dickinson as a player. I'm a big fan of Jason Dickinson.”