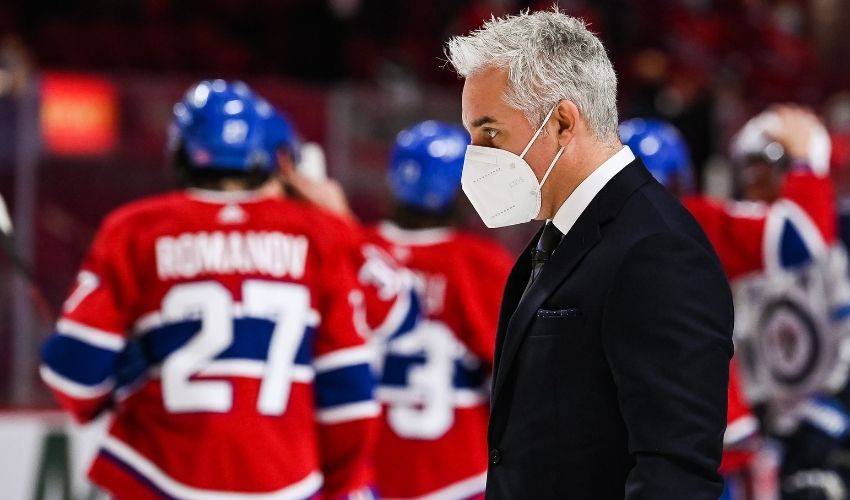 And even still, the days are passing much slower than normal.

The Montreal Canadiens interim head coach, who tested positive for COVID-19 prior to Game 3 of their semifinal against the Vegas Golden Knights, was hoping to avoid a full 14-day quarantine and be back behind the bench before the series concluded.

That didn't happen — his team still pulled off another stunning upset that culminated with Thursday's 3-2 overtime victory in Game 6 — and Ducharme was forced to watch the edge-of-his-couch affair at home.

He'll be in the same spot when the Canadiens open their first Stanley Cup series since 1993 on Monday versus the Tampa Bay Lightning, but the 48-year-old is targeting a Game 3 return four nights later when the series shifts to Montreal.

"It's like looking at your watch too often (and) it looks like time doesn't go by," Ducharme said Saturday on a video conference call. "I'm trying to be as busy as I can and watch a lot of video and help the guys get ready."

But the bad luck and poor timing don't have Ducharme down.

Watching games on TV is like doing video work in real time, but for a coach who makes a point of having regular one-on-one conversations with players, the separation has been a challenge.

"That's the toughest part," Ducharme said. "Not being close to the guys or being able to just have a little chat."

The irony of the situation is his systems, which took a long time to implement due to a lack of practices during a condensed schedule, have finally taken hold — and he isn't there to witness it in the flesh.

"Our guys are not thinking," he said. "They're just executing, they're just playing. That's what we wanted to create ... things to become automatic and just become second nature."

The Canadiens haven't missed a beat with Luke Richardson steering the ship alongside fellow assistants Alexandre Burrows and Sean Burke.

Ducharme, who speaks with the team virtually and is in contact with his coaches between periods, trumpeted the collaborative effort against Vegas that resulted in Montreal going 3-1 after he was sidelined by the coronavirus.

"Great job," said the coach. "We've worked together as a group. We always talk about every situation, and it's been like that every day.

"I needed to step back, and they just took that and kept moving forward."

Following a trying 56-game pandemic season that included a strong start, coaching change, COVID-19 outbreak and a rash of injuries, the 18th-ranked Canadiens limped into the playoffs mostly as an afterthought outside their locker room.

But something clicked with the team down 3-1 to the Toronto Maple Leafs in the opening round.

The Canadiens roared back to stun their Original Six rival in seven games, swept the Winnipeg Jets to capture the one-time-only North Division crown and bested Vegas — a team 23 points clear in the standings to advance to the franchise's first final in 28 years.

"We've been locked down here for a week," said Ducharme, who's isolating with his girlfriend. "Having the team going through that round and talking with the coaches, the players ... it's easier that way."

While unable to soak up the moment in person, the Canadiens made sure to patch him through via video link after the Game 6 triumph over the Golden Knights.

"We battled a long time to get there," Ducharme said. "I was so happy. I would've liked to have been there to celebrate with everyone, but we have more ahead of us in the next round.

"We want to have our biggest celebration at the end."

The Canadiens face another mountain to get there in the defending champs — a team that suffered through a string crushing disappointments before finally lifting the Cup last year.

"When we talk about adversity, they faced adversity," Ducharme said of Tampa, which lost in the 2015 final, the third round in both 2016 and 2018, and was swept to open the 2019 playoffs after winning the Presidents' Trophy. "They went through some ups and downs, learned from it, and last year they won.

"There's a reason why, and they're back."

One of the series keys will be the showdown between a Lightning power play clicking at 37.7 per cent in the playoffs and a Canadiens penalty kill backstopped by Carey Price that hasn't surrendered a goal in 13 games.

"Everybody's doing what they're supposed to do at all times," Montreal winger and Game 6 overtime hero Artturi Lehkonen said. "Your best penalty killer is in the net. Pricey has been on unbelievable."

"If you want to be the best, you've got to beat the best," Lehkonen added of Tampa. "We've got a lot of confidence."

Ducharme said it's important a man-advantage unit that runs through Nikita Kucherov doesn't get into a rhythm.

"If you give them a lot of reps, at some point they're going to feel better and possibly find a solution," he said. "Once we have a penalty to kill, we have to make sure that we do it well, but that we don't give up another chance quickly."

The Canadiens know what's ahead of them.

Their opponent is once again the betting favourite — just like the last three rounds — and they couldn't care less.

"It's going to be a tough challenge," Ducharme said. "But in the final, it's supposed to be that way.

He won't be there, but the calendar will have flipped, inching Ducharme closer to a return.

"I just can't wait to come back," he said. "I'll appreciate everything after, when we're done.

"Especially if we win."

This report by The Canadian Press was first published June 26, 2021.