The Stanley Cup dream — this crazy, improbable dream — is alive and well for the Montreal Canadiens. 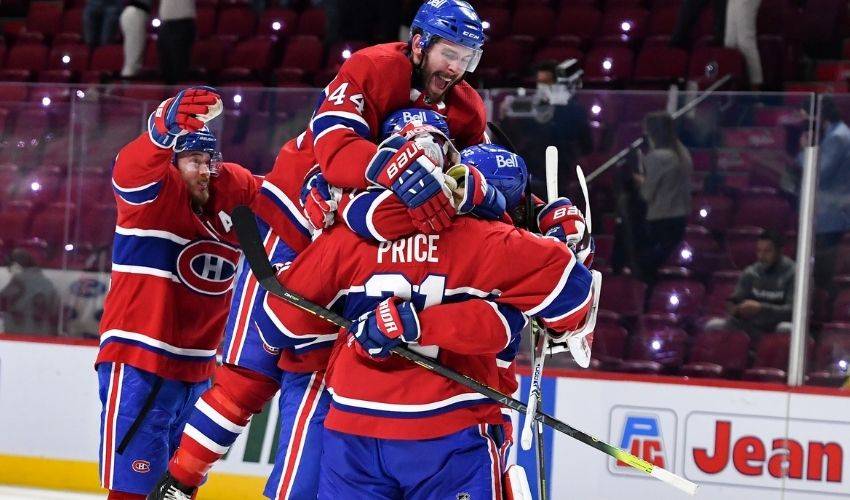 MONTREAL — The Stanley Cup dream — this crazy, improbable dream — is alive and well for the Montreal Canadiens.

And, quite frankly, on some level it makes perfect sense in a year like no other.

Carey Price made 37 saves, including a huge stop on Max Pacioretty in overtime, before Artturi Lehkonen scored at 1:39 of Thursday's extra period as the underdog Canadiens provided another playoff shocker by downing the Vegas Golden Knights 3-2 to win their third-round series 4-2 and advance to the final for the first time since 1993.

"We wouldn't be here right now if we didn't believe," Price said of a team that went through roller-coaster season prior to catching lightning in a bottle the last two months. "We've always stuck with it."

Montreal started the pandemic-shortened campaign red-hot only to have a February stumble cost head coach Claude Julien his job.

The Canadiens then went through a COVID-19 outbreak and a string of key injuries — including Price, captain Shea Weber and gritty winger Brendan Gallagher — to limp into the playoffs as the last team to qualify.

Montreal fell behind the heavily favoured Toronto Maple Leafs 3-1 in the opening round when something clicked. The Canadiens stormed back to win that series in stunning fashion in Game 7 and followed that up with an impressive sweep of the battle-tested Winnipeg Jets.

Then tied 1-1 in the semifinal with Vegas, interim bench boss Dominique Ducharme tested positive for COVID-19.

Minus their leader and with assistant coach Luke Richardson calling the shots, Montreal won three of the next four against a frustrated opponent that finished second in the NHL's overall standings, 23 points better than the Canadiens.

"These guys are a special group and a really good mix," Richardson said. "It's hard to put into words how proud we are of them, but they deserve it.

"They're not done yet. They saw a fire in their eyes."

After Price stared down Pacioretty — Montreal's former captain — early in OT, Lehkonen took a no-look feed from Phillip Danault off the rush and fired his third goal of the playoffs upstairs on Robin Lehner to set off wild scenes inside and outside the Bell Centre.

"We've been through a lot," Weber said. "I don't think now's the time to really sit back and dwell on it too much.

Authorities kept fans inside the arena for more than 30 minutes after the game ended in an attempt to clear the crowds from downtown.

A spokesman said police began trying to disperse the crowd after officers were assaulted and vehicles were vandalized.

Shortly before 1 a.m., riot police were still working to disperse groups of revellers.

"It's a little crazy outside the Bell Centre," Richardson said in his opening remarks. "It's such a special day to celebrate.

"But let's make sure we all celebrate responsibly and get home safe."

Montreal, which will look to end Canada's Cup drought that stretches back to the franchise's last title 28 years ago, also got goals from Weber and Cole Caufield.

The Canadiens, who improved to 5-1 in OT in these playoffs, are set to meet either the Tampa Bay Lightning or New York Islanders in the final. That matchup sits tied 3-3 with Game 7 set for Friday.

Reilly Smith and Alec Martinez replied for Vegas. Lehner, who won Game 4 by a 2-1 overtime scoreline at the Bell Centre, but watched Montreal's 4-1 victory in Game 5 in Sin City with Vezina Trophy finalist Marc-Andre Fleury back in the crease, finished with 29 saves. William Karlsson added two assists.

"It's not easy to get to the Stanley Cup final, we were right there."

But much like Toronto and Winnipeg before them, the Golden Knights had no answer for a relentless opponent that's spent much of the last two months confounding the hockey world.

"I feel blessed, very blessed to be here with Montreal," said Danault, the only Quebec-born player on the Canadiens' roster. "To be in the Stanley Cup final is something amazing."

Thursday was Saint-Jean-Baptiste Day in the province, and there was more to celebrate than usual as the Canadiens will now look to bring the sport's Holy Grail back over the border after Vancouver (1994 and 2011), Calgary (2004), Edmonton (2006) and Ottawa (2007) all fell short in the final since Montreal's triumph 28 years ago.

Down 2-1 to start the third, Vegas got even at 1:08 when Price was handcuffed by Alex Pietrangelo's initial shot that fell to Martinez for the defenceman to bang in his fourth.

The Golden Knights continued to push and had a couple chances to grab the lead before Lehner denied Danault from the slot as the teams headed to their third straight OT game in Montreal.

Caufield snapped a 1-1 tie at 9:36 of the second when he chipped a long feed from Joel Edmundson past Brayden McNabb and raced around the Vegas blue-liner before firing upstairs shortside on Lehner for his fourth of the series.

The 20-year-old had some choice words — "It's good that he opened his mouth about it" — after the Vegas goaltender stopped Caufield on a breakaway in Game 4 and then told reporters the pre-scout suggested the winger was going to go-five hole.

The Bell Centre crowd rained down "Lehner! Lehner!" chants as thousands more well-lubricated fans celebrated on the streets outside.

Caufield became the first player his age or younger to score four times in the third round since Jordan Staal with Pittsburgh in 2008.

"I just shoot for the back of the net," he said. "That's all fun and games, what was going on between him and I.

"But I'm always shooting for the back of the net."

The Canadiens didn't need Price to be the difference much in the series, but he made an outstanding pad stop on Karlsson later in the period before also denying Smith.

With similarities to the team's memorable run in the spring of 1993 — a group of players not expected to challenge the big boys — Montreal is into its NHL-record 33rd final since 1917-18 and will be looking to add to its league-topping 24 Cup banners.

The Canadiens clinched a berth in the title series on home ice for the seventh time since the league expanded in 1966-67, and the first since defeating the Islanders in Game 5 at the Montreal Forum on May 24, 1993.

The club advanced to the Eastern Conference final in both 2010 and 2014, but lost out to the Philadelphia Flyers and New York Rangers, respectively.

Fans gathered around the Bell Centre in the hours before puck drop on a sun-soaked Montreal holiday evening, with many wearing Canadiens jerseys, waving the province's fleur-de-lis flag — or both.

With general manager Marc Bergevin looking on from a private suite in his lucky red suit, the Canadiens opened the scoring on the power play in the first period. Martinez's stick exploded on a clearing attempt and the puck fell to Weber, who ripped his first of the post-season past a screened Lehner at 14:06.

The Golden Knights replied 48 seconds later when Smith redirected his first of the series, and third of the playoffs, at the lip of Price's crease off a nice setup from Shea Theodore.

But Vegas was out of sync most of the series following a 4-1 victory in Game 1 — a lot of that had to do with Montreal's suffocating style and pressure — as a top-6 forward group of Smith, Karlsson, Pacioretty, Mark Stone, Chandler Stephenson and Jonathan Marchessault combined for just two goals.

"You have to give them credit," Golden Knights head coach Pete DeBoer said. "They played a heck of a series."

And now they'll play one more in search of the perfect end to an already unbelievable tale.

This report by The Canadian Press was first published June 24, 2021.