Rask needs hip surgery, wants to return to Bruins in 2022 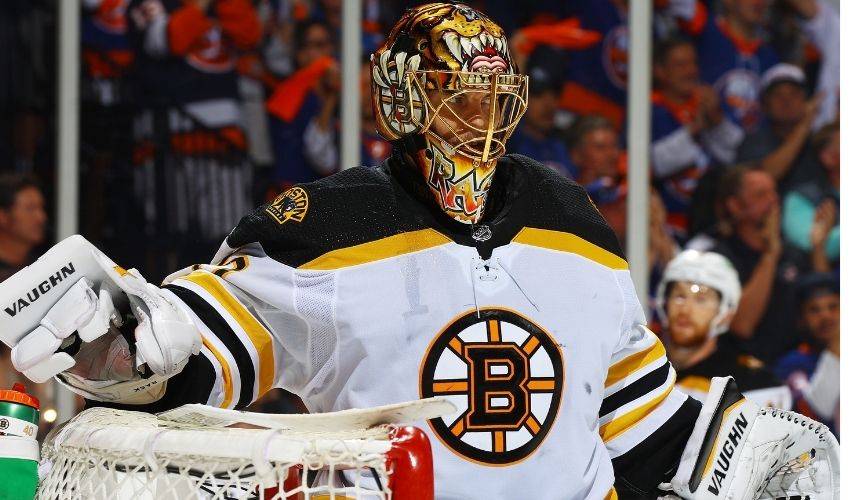 BOSTON (AP) — Boston Bruins goalie Tuukka Rask will have surgery to repair a previously undisclosed torn labrum in his hip, he said Friday, two days after the team was eliminated from the playoffs by the New York Islanders.

“I’m not going to play for anyone else than the Bruins. This is our home,” he said. “At this point of my life and my career, I don’t see any reason to go anywhere else, especially with the health I’m looking at now and a recovery time of five or six months. Hopefully it works out that I recover well and we can talk about contracts when the time is right for that.”

Rask played in only 24 games during the regular season as the team managed his workload. He missed three weeks in March and April but said that was because his back seized up when he was compensating for the hip injury.

“It’s hard, but it never got to a point where I couldn’t play,” Rask said on Friday during the team’s exit interviews. “Obviously, it’s not easy to play with a labral tear as a goalie, but ... I think our training staff did a great job maintaining it and keeping me out there.”

Forward David Krejci is also a free agent after playing his entire career in Boston.

“It’s not about money. I guess that’s all I can tell you. My next deal is not going to be based on money,” he said, adding: “I just can’t see myself playing for a different team.”

Rask, 34, said he didn’t blame the injury for the team’s early exit. He allowed 10 goals in eight periods over the last three games, all losses, including Game 5 when he was pulled during the second break after giving up four goals.

“I can’t stand here and say, ‘It was because of my hip, I couldn’t play at my level.’ I felt like I played at a very good level,’” he said. “I thought everybody should be proud of themselves and the way we battled.”

Although he put no limits on how long he would play if his recovery goes well, Rask said he wasn’t counting on it.

“It could also go the other way. Maybe I don’t recover that well and maybe I just can’t play anymore,” he said. “Who knows?”

Rask also said he would help mentor Jeremy Swayman if he is able.

“Any way I can be helpful for these young guys, I want to do it,” he said. . Who knows what the goaltending situation is going to look like when the season starts? I’m definitely up for helping out in any shape or form I can.”

Also Friday, defenseman Kevan Miller said he was ready to return for Game 7 against the Islanders if the Bruins had made it that far. Miller missed all of the 2019-20 season with a knee injury and appeared in 15 games this year before a setback cost him 20 games.

He sustained a concussion in Game 4 of the first round against the Washington Capitals and had not played since.

“You want to be out there,” Miller said. “I was super close to being back, most likely would have played in Game 7. That it just makes it even worse, to be honest with you. It’s not good.”

In other injury news:

--Defenseman Charlie McAvoy said he has no lingering effects from the hit that sent him into the concussion protocol in Game 6; he returned after missing six minutes in the second period of the final game.

--Defenseman Brandon Carlo said it was questionable whether he would have been able to return for a potential Game 7 from a hit in the third game that gave him at least the third diagnosed concussion of his career.

--Forward Craig Smith said he had a right groin injury that he was managing during the postseason but he won’t need surgery.

--Defenseman Steven Kampfer has another 2 1/2 months of rehab from his hand surgery.

--Forward Curtis Lazar sprained his medial collateral ligament and bruised his ACL but won’t need surgery. “We feared the worse, we got the best news possible in that situation,” he said. “But still, it sucks sitting out that last game.”

--Defenseman Jeremy Lauzon said he had surgery on his hand in the first round and played with a splint on his hand for the entire Islanders series.