'We believe in ourselves': Canadiens comfortable as underdogs against Golden Knights

The Montreal Canadiens will face the Vegas Golden Knights in the Stanley Cup semifinals, with Game 1 set to go on Monday. 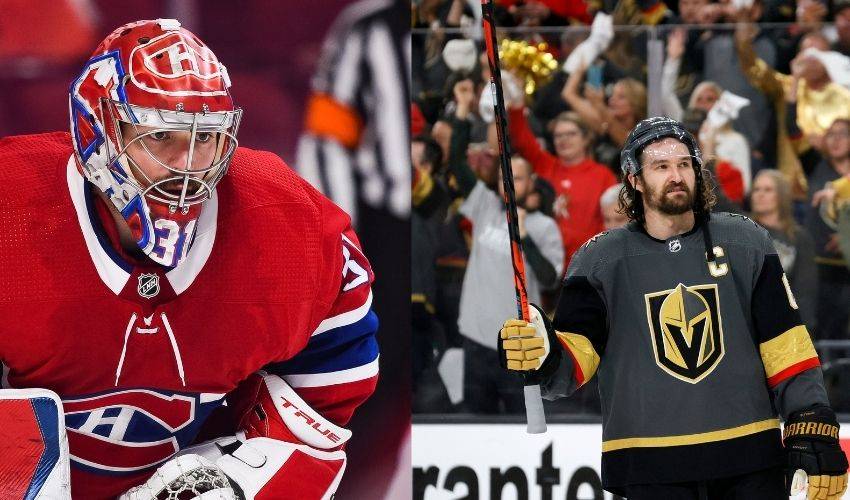 Completing the trifecta — versus the team from Sin City, no less — would be their biggest accomplishment yet.

A club that's unlocked its formula for success following a trying regular season — a balanced attack and tough, physical defence accented by standout goaltending — the Canadiens head into their semifinal series with the Vegas Golden Knights and former captain Max Pacioretty once again as massive underdogs.

And they don't mind one bit.

"I always personally like to prove people wrong," Ducharme, Montreal's interim head coach, said Friday. "When people think that we cannot do something ... it's another layer where you can gain energy."

The Golden Knights, who finished second in the overall standings, 23 points higher than the 18th-ranked Canadiens, sit as the league's biggest third-round favourite in more than 30 years after downing the top-seeded Colorado Avalanche in six games Thursday.

Vegas, which trailed that series 2-0 before winning four straight, has reached this stage of the playoffs an incredible three times in a four-season existence. The Golden Knights are balanced, possess speed, skill and toughness, and have a Vezina Trophy finalist in goal with Marc-Andre Fleury.

The Canadiens, meanwhile, had the least points of any team in the annual spring dance — one that will stretch into the summer of 2021 thanks to COVID-19 — and were expected to be nothing more than cannon fodder for the Toronto Maple Leafs in the opening round.

After digging out of a 3-1 series hole to stun the North Division's top team, Montreal was given little chance of advancing in their subsequent matchup with the Winnipeg Jets, a team that had just swept Connor McDavid's Edmonton Oilers.

The Canadiens not only got past the Jets, they did it in the minimum four contests.

"We weren't really (favourites) to be this far — that's fine," centre Nick Suzuki said. "I have all the confidence in the world in this group."

Montreal-Vegas is oozing storylines, including the dichotomy of an Original Six franchise trying to get back to the final for the first time since 1993 facing a 2017 expansion outfit looking to make its second appearance in the title series.

But the narrative that will likely grab the most attention, especially early, is Pacioretty battling the team he captained for the final three of his nine seasons in red, white and blue before the September 2018 trade to Vegas.

Suzuki, the Golden Knights' second-ever draft pick, was the key piece in the deal for the Canadiens, and has demonstrated both in last year's post-season bubble and throughout 2021 why general manager Marc Bergevin insisted he be included in the exchange.

"I just wanted to show that Montreal made the right decision," Suzuki said. "I want to do everything I can for this franchise.

"It was more about proving Marc right."

Selected 13th overall by Vegas in 2017, Suzuki attended the Golden Knights' first training camp before his career path took a drastic turn 12 months later after Vegas made a surprise run to the Cup final in its first season.

"It was a cool experience to go into an expansion team, be one of the first players," said the 21-year-old from London, Ont. "To see what they've done over such a short period of time is pretty spectacular.

"(The trade) was a bit of a shock right away, but as the days went on, I got more excited to get the opportunity to come here and play for this amazing franchise. I'm really lucky."

Suzuki, who's never spoken to Pacioretty, added he and Montreal's former captain aren't in the same emotional boat with the best-of-seven series set to open Monday at T-Mobile Arena.

"It's a little bit different for him," Suzuki said. "I wasn't really part of that team. I was just one of the prospects that they drafted.

"He was a big part of (Montreal's) organization."

And while Suzuki and the Canadiens beat the Golden Knights twice last season before the pandemic, none of the four remaining teams — the Tampa Bay Lightning and New York Islanders will contest the other semifinal — have a book on each other because of the NHL's division-only schedule meant to reduce travel during the pandemic.

"Different season for everyone," Ducharme said of the 56-game campaign that didn't see any clubs cross the border until the third round because of COVID-19. "But that's part of the challenge for everyone."

"It's a little weird," Canadiens forward Corey Perry added. "But Vegas has pretty much the same team as last year."

The veteran winger, who signed with Montreal just prior to training camp for the league minimum before becoming a key contributor as the season wore on, was a member of the Dallas Stars when they downed Vegas 4-1 in the Western Conference final last September in Edmonton.

Dallas rode the standout play of goaltender Anton Khudobin inside the bubble, not unlike how Montreal has at times relied heavily on Carey Price and his playoff-topping .935 save percentage during this run.

"They're gonna get their opportunities, but it's a matter of limiting their quality scoring chances," Perry said of the Golden Knights. "I believe, in this room, that we can do the same thing and frustrate them."

There's plenty of belief inside the Canadiens' four walls with Montreal standing at the base of what looks like another monumental mountain to climb.

But after getting this far, they wouldn't have it any other way.

"We believe in ourselves," Ducharme said. "Not too many people did starting the playoffs. We don't care if it changes or not. We're controlling what we can control.

"When the puck drops, we'll be ready to go."

This report by The Canadian Press was first published June 11, 2021.